China’s ‘Mask Diplomacy’ Is Faltering. But the U.S. Isn’t Doing Any Better

After seven years of living in Bologna, first as a student and now as a business consultant, Zhang Yimeng has come to consider northern Italy as his second home. And so, when COVID-19 began rampaging through Europe, the 27-year-old from China’s Henan province threw himself behind relief efforts. Value China, the firm Zhang works for, has helped to distribute 40,000 medical masks to two special COVID-19 hospitals in Milan. More vital deliveries are in the works. “Logistics is one of the most difficult things in Italy at the moment, so we are trying to make sure these masks get to the frontline as quickly as possible,” Zhang tells TIME.

It’s just one of many examples of how the Chinese communities in virus-stricken areas—some 310,000 Chinese live in Italy alone—have tried to stem the spread of the deadly pandemic, which has so far sickened one million and killed 50,000 people across the globe. (Italy has more than 13,000 COVID-19-related deaths, four times China’s official death toll.) Three teams of Chinese doctors have been dispatched to Italy so far, with many other countries receiving similar help. Beijing has sent medics to Iraq and Iran, ventilators to France, and personal protection equipment to Cambodia and the Philippines. “Sunshine comes after the storm,” Chinese President Xi Jinping consoled Spanish Prime Minister Pedro Sánchez.

But it’s not all good news. Too often the relief efforts have been undermined by opportunism and bungling by mercenary vendors and a Chinese Communist Party (CCP) desperate to spin the pandemic, which began within its borders, for its own propaganda purposes.

Moreover, the COVID-19 pandemic has proved far from a unifying force, with politicians of all stripes seizing on it—not least the governments in Washington and Beijing—to deflect blame about their own handling of the crisis and push partisan agendas.

On Wednesday, Vice President Mike Pence echoed other senior administration figures when he told CNN, “The reality is that we could’ve been better off if China had been more forthcoming” about the virus. In response, China’s Foreign Ministry spokeswomen Hua Chunying told a regular press conference Tuesday that the world should ignore the “endless, immoral slanders” of “several politicians who are habitual liars.” She highlighted that Washington shut its Wuhan consulate on Jan. 25 and banned recent visitors to China from the U.S. a week later: “What has the U.S. done in the two months since then?”

In the spiraling relations between China and the West, even the COVID-19 crisis is an opportunity to score points—and no opportunity can be wasted. The Trump Administration has obfuscated its torpid response to the crisis by repeating concerns over China’s official figures. In turn, Beijing has sought to boost its soft power by recasting itself from source of the deadly pandemic to the provider of much-needed aid and expertise. On Tuesday, as rows of field hospitals were being built to treat COVID-19 patients in New York City’s Central Park, a plane load of medical supplies arrived in the city from China. “The first of 22 scheduled flights to help slow the spread of #Covid_19 in the #US,” said the state-run China Daily in a tweet.

But it is Europe that has become the key propaganda battleground. In a recent blog post, E.U. chief diplomat Josep Borrell warned that the “politics of generosity” concealed “a geo-political component including a struggle for influence.” China, he added, “is aggressively pushing the message that, unlike the U.S., it is a responsible and reliable partner … Armed with facts, we need to defend Europe against its detractors.”

In Chinese state media reports, purchases of supplies by foreign countries are conflated with aid, which gloss over glaring problems with the quality of goods dispatched. While the masks that Value China procured for the Milan hospitals were the N95 variety made by U.S. multinational 3M, others dispatched from China have failed to meet international standards. The Netherlands was forced to recall 600,000 face masks bought from China. Some 50,000 testing kits China sent to Spain were jettisoned after it was revealed they only had a 30% accuracy rate. The 1.2 million Chinese antibody tests that the Slovak government bought for $16 million weren’t up to grade, Prime Minister Igor Matovic has complained. Czech healthcare authorities said the 300,000 quick tests purchased from China only worked on patients infected for five or more days, and one-third were defective. Turkey has also had problems with the quality of Chinese medical supplies.

In an attempt to mitigate the fallout, China’s Ministry of Commerce said in the future exporters of medical masks, thermometers, protective clothing, testing kits and ventilators must be both certified in China and comply with the standards of the importing nation. Already, China was on the backfoot after reports of hoarding medical supplies early on in the crisis. In February, China’s state-controlled oil explorer PetroChina Co. ordered employees in 20 countries to bulk-buy face masks to send home, reports Bloomberg, with scant regard for local needs. Many other Chinese companies with overseas operations reportedly received similar directives.

More often, however, China has been on the offensive, in line with an aggressive new foreign policy stance President Xi promoted in a memo last year, which urged diplomats to display more “fighting spirit,” sources told Reuters. China’s hawkish Ministry of Foreign Affairs spokesman Zhao Lijian even promoted the conspiracy theory that “it might be U.S. army who brought the epidemic to Wuhan.” It’s not the only aspect of China’s tone-deaf “mask diplomacy,” as it has been dubbed, to make an unforced error. When Xi spoke by phone to Italian Prime Minister Giuseppe Conte, he proposed a “health Silk Road,” which critics took as a shameless attempt promote his faltering Belt and Road Initiative global infrastructure project. (Italy was controversially the first European nation to sign up to it.)

But more damaging have been Chinese state media’s attempts to twist comments by Italian scientist Giuseppe Remuzzi about “strange pneumonias” in Italy in November and December as evidence COVID-19 may not have originated in China at all. (Remuzzi was actually just saying it may have spread from China earlier than documented.) “Italians are really angry about these attempts to deflect [blame],” says Theresa Fallon, director of the Centre for Russia Europe Asia Studies (CREAS) in Brussels. “And it seems China was even willing to sacrifice relations with Italy to do so.”

Some propaganda campaigns are more brazen still. According to recent analysis, 46% of tweets using the hashtag #forzaCinaeItalia, which translates as “come on China and Italy,” were generated by automated bots. For #grazieCina, meaning “Thanks China,” it was 37%. China’s Foreign Ministry Spokeswoman Hua even posted a video on Twitter of Italians in Rome applauding health workers at noon from their balconies—but dubbed with the Chinese national anthem and claiming, spuriously, they were chanting “Grazie, Cina!”

Of course, domestic agendas shape how China’s outreach is perceived. Across Europe, the issue of Chinese aid has been exploited by pro and anti-E.U. factions in nations like Italy, Serbia, Hungary. “Very often the narrative of China coming to the rescue goes hand in hand with the narrative of the E.U. not offering support,” says Lucrezia Poggetti, an analyst for the Mercator Institute for China Studies in Berlin. Some European politicians are proving stunningly opportunist: Serbian President Aleksandar Vucic said, “China is the only country that can help [us fight COVID-19],” adding “European solidarity does not exist,” despite the fact that Serbia is currently applying to become an E.U. member. Meanwhile, popular Italian far-right politician Matteo Salvini—no friend of the E.U.—described China’s COVID-19 response as “a crime against humanity.”

Still, China’s public relations floundering doesn’t mean Washington is doing any better. Reports that Donald Trump was trying to poach German scientists to make a COVID-19 vaccine for “exclusive” use in the U.S. caused outrage across Europe, says Mario Esteban, a senior analyst specializing in E.U.-East Asia relations at the Elcano Royal Institute in Madrid. For Esteban, Washington has compounded a lack of material aid with a more general dearth of sympathy for its suffering allies. “In Europe, it’s a pretty clear that the current American administration is isolationist and unilateralist, which is providing room for China to improve its image.”

Beijing’s failure to exploit this opportunity is proving a source of conflict with the CCP. Speaking to Axios on HBO, Cui Tiankai, China’s ambassador to the U.S., rubbished Zhao’s conspiracy theory regarding the U.S. military origins of COVID-19. On Thursday, former Vice-Foreign Minister Fu Ying wrote an article in Shanghai-based state media The Paper that argued China must adopt a more sophisticated approach to international diplomacy. “We must put forth a true, three-dimensional, and comprehensive [picture of] China to international society,” he said.

Ultimately, of course, Beijing would be better served leaving propaganda in the hands of its most potent weapon: the selfless efforts of ordinary Chinese. “Before we delivered those supplies, medical workers had to use one mask for two days, which is extremely dangerous when treating COVID-19,” says Zhang, the young consultant in Bologna. “We plan to bring more soon. We’re just happy to do something for the Italian community.”

Most Popular on TIME
1
Alleged Hunter Biden Emails Circulated in Ukraine: Exclusive
2
21 Hidden Gem Horror Movies to Stream Now
3
What to Know About Shooting of Protesters in Nigeria 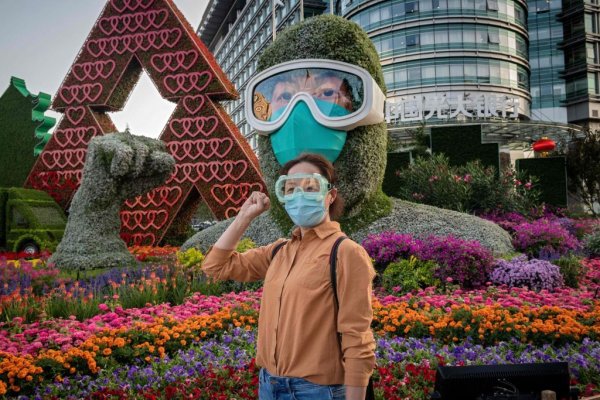 Negative Views of China Rise Sharply in Advanced Democracies
Next Up: Editor's Pick