Italy Appears to be Flattening the Curve. What Did the Country Do Right?

The growth rate of total COVID-19 cases in Italy has been slowing since March 8, according to the Italian Civil Protection Department, and, in the past few days, the total new daily cases have finally started to shrink, suggesting Italy is ‘flattening the curve,’ meaning that it is slowing the spread of the virus.

Italy was the first country in Europe to witness a widespread outbreak of the coronavirus, which, as of the morning of April 2, has infected some 960,000 people worldwide. Currently Italy has the second highest number of confirmed cases worldwide, with approximately 110,000, trailing only the U.S. And Italy has seen the most COVID-19 deaths out of any country, with over 13,000 Italians having lost their lives to the virus. Since March 9, Italy’s 60 million residents have been placed on lockdown.

The latest figures—which suggest that the rate of transmission and infection in Italy is on the decline—are promising. But some public health experts in Italy are reluctant to celebrate.

“Yes, we flattened the curve: We are seeing some hope, some light,” says Lorenzo Casani, the health director of a clinic for elderly people in Lombardy, a region in northern Italy. “But the tunnel is very, very long.”

Is Italy really flattening the curve?

Data coming from various sources all suggest that Italy has flattened the curve.

Public health experts were anticipating that Italy would witness a diminishing number of new cases at the end of March and early April, as a result of the lockdown measures put in place a few weeks earlier.

“It’s important to have some evidence that what we’re doing is having an impact,” says Flavia Riccardo, a researcher in the Department of Infectious Diseases at the Italian National Institute of Health. “Lockdown is a very harsh measure, especially on this scale in terms of the social and economic impact it’s having.”

However, public health experts are not yet ready to celebrate. “We need to be very careful with our optimism,” Casani says. “We should not be relieved by these numbers.” While official numbers suggest a decrease in the number of new reported cases, this figure does not take into account those who are COVID-19 positive but have not been tested. The number of people with either mild illness or who are non-symptomatic is “huge” Casani says.

Massimo Galli, the head of the infectious disease unit at Sacco Hospital in Milan, points out that the number of mild cases could be increasing but going undetected. “I’m not sure the virus is really in reduction,” says Galli. “It’s extremely difficult to forecast the progression of the disease, the curve, and the mythical peak of the epidemic in such conditions.”

He adds, however, that the data should nevertheless be celebrated as it suggests a decreasing pressure on hospitals, which are seeing a decline in the number of patients seeking out their services for severe coronavirus infections.

How long did it take?

According to the Italian Civil Protection Department, it has taken between three and four weeks for the curve to flatten. Between March 6 and 7, Italy saw a 26.9% increase in total cases but has since been able to incrementally decrease that figure over the past few weeks.

How long will protective measures be in place for?

The Italian government currently plans to extend the lockdown until April 13, although it may well extend beyond that. “We cannot plan for an easing of the lockdown yet,” Prime Minister Giuseppe Conte said in a televised speech on April 1.

Experts say that the decrease in the number of new cases does not mean protective measures should be lifted. “For Italy, the idea of starting to reopen businesses in the coming weeks is simply crazy,” Cartabellotta says, noting that the decision to eventually lift lockdown may vary by region.

Casani agrees. “Draconian measures are still needed,” he says. “It’s the only way to avoid a catastrophe.”

Can other countries learn from Italy?

Experts say that other countries can learn from both Italy’s mistakes and its successes.

The Italian experience of COVID-19 emphasizes the importance of early intervention in countries that have yet to experience a significant outbreak, experts say. While the first case was only discovered on Feb. 20, the virus was spreading undetected throughout the country for two to three weeks before the initial case was reported, hampering early health interventions that could have mitigated the spread of the virus.

Some say that even once discovered, Italian authorities were too slow to implement lockdown measures, for fear of compromising an already fragile national economy. “The Italian experience shows that other countries can no longer underestimate the problem and must learn from our errors,” Cartabellotta says.

But experts say there is also a lot the world can learn from what Italy did right.

The decrease in the number of newly reported cases can largely be attributed to the intense lockdown measures implemented by the Italian government, which has shut down most establishments as well as non-essential production and has restricted all unnecessary movement throughout the country. Cartabellotta says these measures have reduced “the transmission of the virus, delayed the peak of the epidemic, reduced its size, and spread cases over a longer period of time to allow the health system to properly prepare and better manage symptomatic cases.”

While Italy was slow to detect the virus, Riccardo says the government moved relatively quickly once the virus was discovered. “Italy set up a very aggressive policy both in terms of contact tracing and investigation and scaling up measures to prepare for the increased demand in terms of care,” she says. While rates of testing vary from region to region, Italy on the whole has performed more tests than other European Union countries.

Casani, a health director of a clinic, says he along with other doctors have realized the importance of treating COVID-19 in its early stages. The first stage of the virus, which involves the appearance of flu-like symptoms, is an important moment for intervention. As the disease progresses, patients can experience a hyper inflammatory response which requires intensive care. Casani says that in order for countries to avoid unnecessary suffering and overburdening of their health care systems, health intervention is needed before the disease progresses.

Beyond what Italy did right and wrong, Riccardo says Italy’s outbreak—and its above average mortality rate—shows the world just how dangerous the virus can be.

“At the end of February, the world was looking at us and saying this cannot be possible, there must be something wrong with the Italian healthcare system” Riccardo says. But now that countries around the world are facing their own outbreaks, “they know that we are looking at a pathogen that is very capable of spreading and causing severe illness and death.” 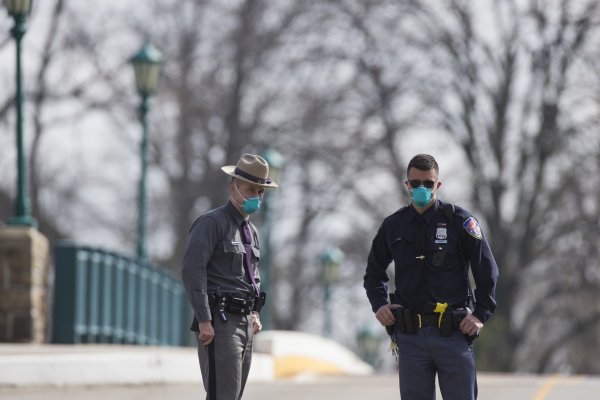 Police Departments, Sheriffs' Offices Across the U.S. Grapple With COVID-19's Impact on Public Safety—and Their Own
Next Up: Editor's Pick