Italian officials said Friday an additional 14 people have been diagnosed with COVID-19, up from six who were previously diagnosed in the northern part of the country — bringing the total to 17.

Officials from the Northern Lombardy region first reported that three individuals tested positive for coronavirus in Italy early Friday. The individuals had not traveled to China, marking the first instance of local transmission in Italy. Officials reported additional cases at a press conference later in the day. Those who were infected were in proximity or in the same locations as the group that was diagnosed earlier in the day, according to the Associated Press.

The Italian Health Ministry has ordered anyone who has been in direct contact with these individuals to be quarantined for two weeks. All residents living in Codogno and Castiglione d’Adda—the two Lombardy towns where the patients are from—have been told to stay home.

“We have introduced a compulsory quarantine for all those who have been in contact with the patients who tested positive,” Italian Prime Minister Giuseppe Conte told reporters.

The first case of local transmission was a 38-year-old man who is believed to have become infected after meeting regularly with someone who had recently been to China, the Lombardy Chief Giulio Gallera confirmed. His wife subsequently tested positive as did someone who came into contact with the man while engaging in recreational activities.

All three patients are being treated at Rome’s infectious disease hospital alongside the other three people infected in the country, which includes a Chinese couple from Wuhan and an Italian citizen who was recently repatriated from Wuhan.

The newer cases reported Friday evening include three patients at the hospital the 38-year-old man visited, five doctors and nurses and three people who visited a cafe in the Lombardy region, according to the AP.

China has had over 75,400 cases and 2,236 people have died. In Italy, Sinophobia has been prevalent since the outbreak of the virus, according to rights groups. The Bologna Today reported that a 15 year-old Chinese Italian boy was attacked by perpetrators who said “you’re bringing us disease.”

Emanuele Russo, the president of Amnesty Italy, told Al Jazeera that “fear of the virus’ spread has simply shed light on the Sinophobia that was already present.” He added, “we need the government to take a formal anti-xenophobia stance and criminalise acts that violate human rights.” 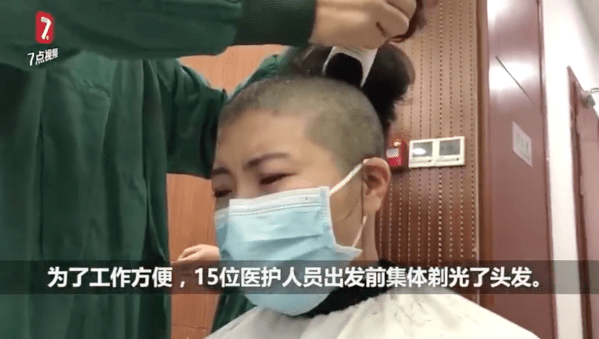 Video of Female Medics in China Having Heads Shaved Sparks Backlash
Next Up: Editor's Pick