The Evil Tucked Into the $2 Trillion Coronavirus Stimulus Bill

Ideas
By William J. Barber II and Liz Theoharis
Barber is president of Repairers of the Breach and co-chair of the Poor People’s Campaign: A National Call for Moral Revival. He is author of We Are Called to Be a Movement.
Rev. Dr. Liz Theoharis, president of the Kairos Center, is a co-chair of the Poor People's Campaign, a movement to build the power of poor people and change the public narrative on poverty.

On Friday President Trump signed a third bill to address the COVID-19 crisis. The largest relief package in U.S. history, this $2 trillion bill provides direct cash payments to tens of millions of Americans, immediate relief to small businesses, and expanded unemployment benefits for some of those who are out of work while much of the country is under stay-at-home orders. But it also includes a $500 billion fund to bail out corporations, and Trump has already vowed to defy the oversight that Democrats in the Senate and House worked to require. Americans who are desperate for aid from their government could not get it without paying a 25% surcharge to the rich and powerful. In a word, this is evil.

The Bible is clear that making policy that does not protect the rights of the poor and puts the cause of the wealthy first is evil. Zechariah 7:10 reminds us: “Do not oppress the widow, the fatherless, the sojourner, or the poor, and let none of you devise evil against another in your heart.” Jeremiah 5:28 cries out: “They have grown fat and sleek. They know no bounds in deeds of evil; they judge not with justice the cause of the fatherless, to make it prosper, and they do not defend the rights of the needy.”

If we do not want to be enablers of evil, we must speak out and stand up against it. To write a bill in the time of a pandemic that includes $500 billion for the already wealth and greedy is–according to the word of God–evil.

Epidemics emerge along the fissures of our society, reflecting not only the biology of the infectious agent, but patterns of marginalization, exclusion and discrimination. The coronavirus pandemic is no exception. The United States has many open wounds rooted in decades of racist policies and the criminalization of the poor. COVID-19 has revealed deep failures and will reinforce existing health inequities unless we proactively turn our attention to how we serve the poorest and most marginalized in our societies.

If we had paid sick days for all workers, people wouldn’t have to come to work when they have symptoms—and we wouldn’t have had to rush to pass the first bill that guarantees only some workers paid sick leave. If we had strong labor rights and unions, a guaranteed living wage, good benefits and robust anti-poverty programs, many could afford basic necessities to keep them healthier year-round. If we taxed the rich and corporations and used that money for the public good, our economy and public health system would be better equipped to sustain shocks. If we valued international relationships and collaboration over militarism, we could be sharing tests, treatments and COVID-19 response across borders.

We know the truth must speak out loudly with a certain righteous militancy – one that started because, even before the virus struck, far too many people were dying due to social factors, According to a 2011 study by Columbia University’s Mailman School of Public Health, nearly 4.5% of deaths in the U.S. could be attributed to poverty. We must join the cause of the poor lest history finds us capitulating in the face of policy evil, driven by the perverted intentions of President who can callously say that if we only see 100,000 people die from this virus we will have “done a very good job.”

As Trump and his enablers continue to fumble their response to COVID-19 and sow deep inequities into the social response to this pandemic, the Poor People’s Campaign is calling for noncooperation with injustice and inequality. We demand that Congress go back to work to fix the coronavirus stimulus bill and make permanent changes to help the poor, the sick, the uninsured, the homeless and low-wage workers.

Indeed, the $2 trillion bill that Congress passed treated corporations like people and people like things–with no provisions for a permanent living wage, paid sick leave for all or health insurance for the uninsured. It leaves out the majority of homeless, undocumented immigrants, the disabled and anyone too poor to have to file taxes. It only places a four-month moratorium on eviction filings. It does not include rent freezes nor large-scale debt forgiveness.

We need a relief bill that centers the needs of the homeless, the uninsured, the underemployed and the low-wage workers now deemed “essential,” although their wages do not show this. We must invest in education, living-wage jobs, anti-poverty programs, public infrastructure and a single-payer health-care program that does away with our privatized, for-profit health-care system and instead guarantees everybody in, nobody out. We have put forward these demands in our petition “Poverty Amidst Pandemic: A Moral Response to COVID-19.”

As preachers and theologians, we recoil at Trump’s suggestion that he could make Easter even greater by rushing to fill the churches. His words are not those of a faithful Christian; they reflect the idolatry of those who have openly stated that it would be worth the sacrifice of some lives to revive an economy that already failed nearly half of the nation.

Between now and Easter, we are asking people to call on the White House and Congress to enact relief for the people that Jesus cared about–the poor, the sick, the homeless, the children, the low-wage workers. Over the next few months, we are calling for mass noncooperation with the Trump Administration’s “return to normalcy” approach to this crisis. We are organizing for a digital Mass Poor People’s Assembly and Moral March on Washington on June 20, 2020–the largest online gathering of poor and low-wealth people and all people of conscience in U.S. history.

As he was building the 1968 Poor People’s Campaign, Rev. Dr. Martin Luther King Jr. said: “Power for poor people will really mean having the ability, the togetherness, the assertiveness, and the aggressiveness to make the power structure of this nation say yes when they may be desirous to say no.” May we build the power to win all of our demands. This moment calls for nothing less. 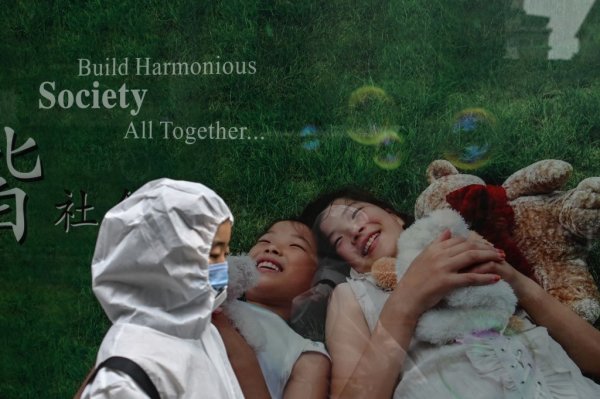 China Hits Back at Report That It Hid Coronavirus Numbers
Next Up: Editor's Pick