Global Air Pollution Has Fallen Due to the Coronavirus Outbreak, but Experts Warn It Isn't a Silver Lining

Around the world an unexpected impact of the economic shuttering due to the coronavirus outbreak is striking blue skies and clear water in places, from Venice to Beijing, Los Angeles to Bangalore, where only weeks ago pollution dominated.

COVID-19 has driven the global economy to a near-halt as the pandemic sweeps the globe. With factories shuttered and cars parked in garages, air pollution has dissipated in cities. The Chinese capital Beijing, known for the lung-choking levels of toxic pollution that shroud the city, has had the unusual sight of clear skies as factories in the region have shut down production. Given China’s huge problems with air pollution, which causes an estimated 1 million premature deaths a year, the reduction has offered unexpected relief.

But environmental science and policy experts warn not to call this a silver lining; any sustainable reduction in emissions and pollution will need to happen in a way that doesn’t totally splinter society. And, moreover, they expect that pollution levels will return when the coronavirus ebbs—and in some cases may come back with a vengeance.

“I see it and I don’t think of a silver lining,” says Wade McGillis, an associate professor of earth and environmental engineering at Columbia University. “I see it and I think: those poor people who are not moving around and sheltered in place, and their lives being ruined.”

In the short term, the change is seemingly miraculous. Satellite images from the European Space Agency show reduced levels of nitrogen dioxide, a byproduct of burning fossil fuels that causes respiratory problems, across major cities on the continent including Paris, Madrid and Rome as countries lock down and restrict travel. Cities across the U.S. have seen similar effects as Americans stay home in traffic-prone cities like Los Angeles and New York.

In China, the world’s largest emitter of greenhouse gases, carbon dioxide emissions declined by a quarter in mid-February from a few weeks earlier, according to an analysis published in Carbon Brief. Scientists recorded similar declines in other pollutants like nitrogen dioxide and particulate matter in the country, which has spent years trying to clean the air in smog-choked cities. “In terms of a shift or a change that really happened overnight, this has been unprecedentedly dramatic,” says Lauri Myllyvirta, author of the Carbon Brief report and lead analyst at the Centre for Research on Energy and Clean Air.

In theory, this sharp decline in pollution and carbon emissions is a positive development for the planet and the humans who live on it. For one, air pollution contributes to millions of deaths across the globe every year, aggravating cardiovascular disease and respiratory health. Clearer air may also deliver some brief relief to those suffering from COVID-19, making it easier to breathe for patients who are struggling, though health experts say that years of exposure to pollution has likely made many people more susceptible to the disease. “The damage is already done,” said Sascha Marschang, acting secretary general of the European Public Health Alliance in a statement. “Years of breathing in dirty air from traffic fumes and other sources will have weakened the health of all those who are now embroiled in a life or death fight.”

The decline in emissions may also seem like a win for the fight against climate change. Climate scientists have warned that global carbon emissions need to peak in the coming years for the world to have even a remote chance of keeping temperatures from rising more than 1.5°C by the end of the century, a level that would likely bring a range of dramatic consequences from mass climate migration to the loss of the world’s coral reefs. As a coronavirus-related economic fallout, carbon emissions could decline in 2020. But, without a concerted effort, they’re unlikely to stay down.

The situation in China shows how quickly emissions and the related air pollution can bounce back. By the end of March, coal consumption and nitrogen dioxide pollution had returned to normal levels, according to Myllyvirta. A bigger long-term question remains: will the country use this moment to fund green stimulus measures to foster economic growth? Such a program could rapidly expand clean energy infrastructure and energy efficiency improvements even though robust support for green infrastructure will not sustain the dramatic decline in air pollution and emissions in the short-term—at least not yet.

Across the globe, policymakers will need to answer similar questions. If policymakers make a concentrated and sustained effort to decarbonize our economy, today’s clear skies give us a preview of what may come—even if it takes decades to get there. 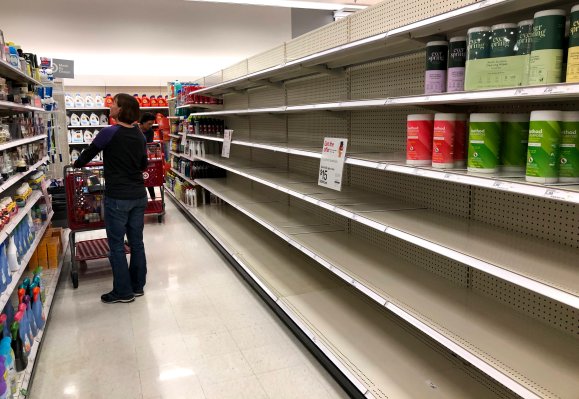