'I Still Can't Believe What I'm Seeing.' What It’s Like to Live Across the Street From a Temporary Morgue During the Coronavirus Outbreak

A covered body is seen in the back of a temporary morgue erected outside Wyckoff Heights Medical Center in Brooklyn, New York, on March 29, 2020.
Benjamin Norman for TIME
By Simon Shuster

From the living room window of her Brooklyn apartment, Alix Monteleone watched the team of workers assemble the morgue in stages over the weekend. First, they parked the refrigerated trailer along the curb, a white box about the size of a large shipping container. Then, they built a wooden ramp to allow hospital staff to wheel the bodies inside. Finally, on Monday, the workers erected a wall of panels, thin and white, to stop passersby from staring or getting too close to the dead.

After that, the gawkers mostly went away. But Monteleone, a 28-year-old event planner from Long Island, kept up her vigil from the third-floor window.

“I spend my entire day like this,” she says, propping her elbows onto the back of her couch and looking out toward the Wyckoff Heights Medical Center, the hospital across the street. “I still can’t believe what I’m seeing.”

Workers build shelves for a makeshift morgue outside Wyckoff Heights Medical Center in Brooklyn, New York, on March 30, as seen from an apartment building across the street.
Benjamin Norman for TIME

The deployment of temporary morgues across the city—known to emergency planners as Body Collection Points, or BCPs—marks a new phase of the COVID-19 pandemic for New Yorkers, whose city has rapidly become the global center of the crisis. By late Monday, the state’s death toll had surpassed 1,200, with more than 66,000 confirmed infections. More than 900 of the deaths were in New York City.

Until now, it had been largely possible for residents to shut out the worst of this calamity, retreat into their homes and only go out for short trips around the neighborhood, all without confronting anything more grim than empty streets and people wearing face masks.

The arrival of the morgues and makeshift hospitals—which have been installed in public spaces—has thrust the pandemic into full view as it envelops the nation’s largest city, making this escapism difficult. Anyone strolling through Central Park could observe a field hospital erected on the lawns to alleviate the patient load at hospitals like Wyckoff Heights. Another pop-up hospital has been set up at the Jacob K. Javits Convention Center in Manhattan, and on Monday, the Navy ship Comfort docked in New York to take on more patients.

The largest temporary morgue in New York City occupies a tent set up over the weekend outside Bellevue Hospital in Manhattan. “We have them at public and private hospitals throughout the boroughs,” says Aja Worthy-Davis, a spokesperson for the office of the chief medical examiner, the city agency responsible for caring for the dead. At least four had been set up as of Monday, she said: two in Brooklyn, one in Queens, and one in Manhattan. “We expect to start utilizing the large tent in Bellevue soon.”

Ramon Rodriguez, the President and CEO of the Wyckoff Heights hospital, says it was not his decision to deploy the refrigerated truck, but he is thankful that the office of the medical examiner was able to provide it to his facility, whose morgue can only house nine bodies at a time. “Over the last three weeks we have filled that morgue many times over,” he says of the hospital’s usual morgue space.

The bodies in the refrigerated truck are being picked up by funeral homes for burial as quickly as possible, adds Rodriguez. Given the distress this process was likely to cause local residents, placing the truck on a public street was not an easy decision, he says. But the hospital had no other viable place to put the trailer, which is 53 feet long.

“We want to be respectful and kind both to the people who have left this earth and those who live across the street,” says Rodriguez. And the need for extra privacy is why the hospital put an enclosure around the wooden ramp leading to the trailer.

Under the New York City medical examiner’s protocols for a pandemic, the deployment of temporary morgues becomes necessary when the death toll tops 200 per day, overwhelming the capacity of hospitals to store bodies safely. New York City passed that threshold last week, triggering a new “mobilization level” in the city—the third level on a scale of six—according to a copy of the chief medical examiner’s pandemic “surge plan” for handling the dead, which Worthy-Davis shared with TIME.

Drafted in 2008 to prepare for a devastating flu pandemic, the plan envisions far more dramatic measures of “mass fatality management” if the virus continues to spread. Officials at Rikers Island, the city’s main jail, could put inmates to work burying some of the dead in the city-run public cemetery on Hart Island, the plan states. Under the current level of mobilization, the city must also draw up contracts with cemeteries that can accommodate temporary mass graves, which the plan describes in jarring detail: “Ten bodies in caskets are placed lengthwise in a long narrow section in the ground.”

Workers transport a casket-sized box near the morgue set up outside Wyckoff Heights Medical Center in Brooklyn on March 30.
Benjamin Norman for TIME

By comparison, the installation of temporary morgues would seem like a measure New Yorkers could stomach. But it has been enough to unsettle the neighbors of the Wyckoff Heights hospital. Before the refrigerated trailer arrived on Friday, Monteleone and her fiance, Marc Kozlow, had gotten used to the routines of confinement and boredom that come with social distancing. They took turns walking their dog Hank around the neighborhood. She had tried doing needlepoint to pass the time. He had started baking sourdough in the kitchen.

But by Saturday, when they saw the first bodies taken on gurneys from the hospital and carried into the trailer, their hopes for riding out the pandemic at home began to dim. “If a nuclear reactor is exploding near you, you don’t stay near the hot zone,” says Kozlow, 33. “You get out.”

Although they understood from news reports that the hospital across the street was quickly filling with COVID-19 patients last week, the reality only sank in after they began to see the bodies, some of them zipped into bags, others wrapped in what appeared to be white bed sheets. They counted more than a dozen over the weekend.

Monteleone keeps insisting they stay. “This is my home,” she says in the living room of their one-bedroom apartment. “The only semblance of control I have in my life right now is staying in my home. So we just need to adjust. We need to close the blinds.” 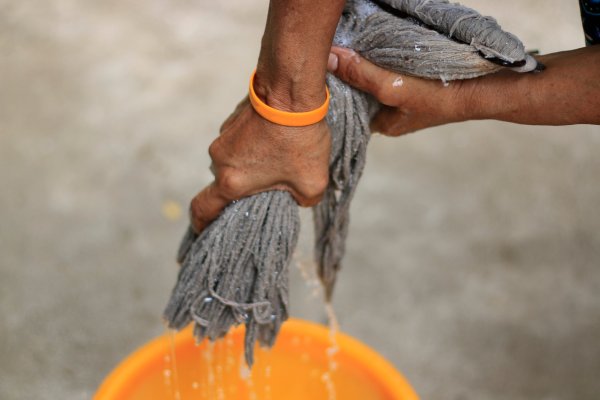 'No One Mentions the People Who Clean It Up': What It's Like to Clean Professionally During the COVID-19 Outbreak
Next Up: Editor's Pick