‘I’ve Been Missing Caring for People.’ Thousands of Retired Health Care Workers Are Volunteering to Help Areas Overwhelmed By Coronavirus

Dr. Jane Bedell (right) is pictured at her retirement party at the Bronx Museum of the Arts on Feb. 28, 2020.
Dr. Jane Bedell
By Sanya Mansoor

Dr. Jane Bedell was less than a month into her retirement and was looking forward to hiking and visiting her son. But when the coronavirus pandemic hit and New York Gov. Andrew Cuomo called on retired health care professionals and students to help care for the state’s rapidly rising confirmed COVID-19 cases, the 63-year-old New Yorker immediately put her plans on hold and signed up to help.

Bedell is one of at least 52,000 health professionals in New York — including more than 2,400 nurse practitioners and at least 2,265 physicians, many of whom are retired or students — that have responded to Cuomo’s request. Governors across the country, including in Illinois and Colorado, have made similar asks. Italy and the U.K., in their own desperate attempts to treat massive influxes of patients that are overwhelming hospitals, have also requested medical professionals to come out of retirement; thousands have responded.

Despite the challenges and the potential risks, Cathy Howard, a 71-year-old retired nurse in Colorado, is eager to get back to work. She’s used to being active—playing softball and pickleball for hours every week— and playing cards or going out to dinner or the movies with her friends. Recent social distancing measures have disrupted her schedule. “I like to keep busy,” Howard says. “Since my retirement, I’ve been missing caring for people. This is an opportunity for me to help people again.”

Bedell, the New Yorker, is no stranger to crisis. She most recently retired from the New York City Department of Health & Mental Hygiene, where she worked as Assistant Commissioner for the Bronx Bureau of Neighborhood Health. As part of her job, she responded to previous health emergencies in New York, including Hurricane Irene and Tropical Storm Sandy, the Legionella outbreak and Ebola. She’s also worked in the city’s busy clinic system as a primary care doctor.

And she’s survived cancer — a battle she says played into her decision to want to help, even though her age and medical history could put her at a higher risk for COVID-19. “I’ve done a pretty big risk assessment of myself,” Bedell says, noting that her biggest worry if she falls sick is that she would “clog up a hospital bed.” But she’s cautious too, adding that she’s “not going to work in dangerous situations without the right equipment.”

The strain on health care resources in the U.S. has been most apparent in New York, an epicenter of the country’s outbreak that has so far reported more than 30,000 COVID-19 cases; of these, more than 17,000 are in New York City. Cuomo’s press conferences have caught national attention as he pleads with the federal government for more equipment, including ventilators that are needed to treat respiratory distress caused by COVID-19. (There are no good substitutes for ventilators, which are key to dealing with a virus that aggressively attacks the lungs.)

Cuomo has also made repeated pleas for retired health care professionals “whether or not they work in a hospital” to help out, even if they’re staff at health insurance companies or clinics. He says a “back up reserve staff” will be essential. “We want to enlist as many staff as we can (…) because health care workers will get sick and this is going to go on for weeks and you can’t ask a person to work for 14 days consecutive or around the clock shifts,” Cuomo said at a press conference on Tuesday.

Experts say it’s a necessary step at this point of the outbreak. “You have to pull out all the stops when you’re confronting what we’re confronting now,” Sten Vermund, dean of the Yale School of Public Health, tells TIME. Susan Michaels-Strasser, an assistant professor of epidemiology at Columbia University with over 25 years of experience in nursing and public health, agrees that it’s an “appropriate” measure at this stage. “It behooves us to use all the human resources” we can, she says, “we’re really all in this together.”

Data shows hospitals and health centers are reaching their maximum capacity, she explains. “Not only do we have more patients, we have more critically ill patients so it requires a higher level of care,” Michaels-Strasser says. “One nurse can’t take four people; they (often) have to take care of one person because it’s a life or death situation.” Neither expert recalls the U.S. taking such drastic steps in response to a previous infectious disease outbreak, although Michaels-Strasser notes that using back-up doctors and nurses in Sierra Leone during the Ebola outbreak was “done effectively.”

Michaels-Strasser has also signed up to offer her services to the state and is coordinating efforts by Columbia University’s Mailman School of Public Health to rally volunteers. She says she would be prepared to work on the front lines even with the equipment shortage; she recalls working on the HIV response in African countries with reused gloves full of holes. Michaels-Strasser notes that the choice to volunteer is a deeply personal one. She says the dwindling resources are “shameful” given how much Americans pay for health care. “It makes me angry,” she says.

Bedell says she has not yet heard about how the city intends to use her skills. She’s prepared to help by using her experience as a doctor or assistant city commissioner — helping deal with patients or do community outreach, for example.

For some retired health care professionals, volunteering is not a practical option. Anita Reinhardt, 70, lives in California and worked as a nurse for about 35 years, but says issues with her back, knees and heart prevent her from helping out now. “I would love to go and help my fellow nurses but I have to be realistic,” Reinhardt tells TIME. “I can’t work anymore because of my health.” Reinhardt says she has a 6-year-old granddaughter who she wants “to spend time with when this is all over.”

Others want to help away from the front lines but are not sure how. Trudy Lechner, a retired nurse in Parkland, Fla., has more than five decades of nursing experience. “I’m glad to help but not on the front lines because I have my underlying conditions,” says Lechner, who adds she had lung cancer six years ago. A couple of weeks ago, Lechner called her local health department asking how she could help. The Broward County Health Department appeared to “have no clue,” Lechner says.( A spokesperson for The Florida Department of Health did not comment on Lechner’s individual situation but said in an email to TIME that the state has not yet “made any specific requests for retired healthcare professionals to come out of retirement.”)

Lechner says most retired nurses would probably “not be fit to work a 12-hour shift” even as they may like to help; many, like her, have been left with back injuries or other conditions. But there are ways they can be useful; they could, for example, do shorter shifts with non-coronavirus patients. “Retired nurses could help bathe patients on those other floors, make beds to free up other staff, work in the nursery as rockers for the babies, answer phones, do errands, going to the pharmacy, taking vital signs, be a friendly visitor for patients that now aren’t allowed visitors,” Lechner says.

Vermund notes that most people who have since retired from the medical profession are likely over the age of 60 or 70. “That’s exactly the highest risk subgroup, so you would not be likely to deploy them on the front lines anyway.” Their institutional knowledge can, however, be useful in other ways to relieve the burden on the health care system. They could help track down suspected COVID-19 cases or work telephone lines. “There’s a small army of tasks we can have them do that would relieve the practicing physicians and nurses from doing,” Vermund says.

State officials aren’t the only ones organizing extra help. Other efforts are being coordinated by Volunteer Surge, a non-profit initiative of the Yale School of Public Health, Salesforce.com, the American Red Cross and others. (TIME is owned by Salesforce CEO Marc Benioff and Lynne Benioff.) For example, Vermund is helping lead an initiative to recruit, train and deploy community health workers. These volunteers can help staff test centers, triage patients waiting in hospital lines and conduct telehealth follow ups with asymptomatic COVID-19 positive patients.

Carolyn Grant, a 63-year-old nurse who retired from UW Medicine/Northwest Hospital & Medical Center, had been retired for about two-and-a-half months when her former employer asked whether she could help manage two COVID-19 testing sites on campus properties. Grant, 63, had taken a voluntary early retirement and wondered if she would be putting herself at risk if she accepted. She agreed and is not caring for or testing patients but is overseeing a testing process for UW medicine employees and patients in which they test around 130-160 staff members a day and about 400 patients per week. “We need to make sure there’s a safe and healthy workforce (…) so we can take care of patients in the community,” Grant says. “I felt like I had skills and abilities that I could bring to the table.”

Howard, the retired nurse in Colorado, seems undeterred about working on the front lines. She says she worked as an infection control practitioner earlier in her career and that she doesn’t have any underlying conditions. Howard mentions that her family members have shown “a little bit of concern here or there” but she knows this is something she wants to do.

“It doesn’t frighten me at all,” Howard says. “I just want to help out where I can.” 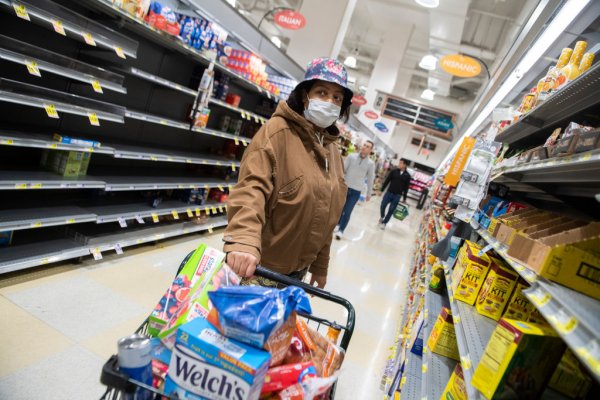 What Americans Are Buying to Prepare for COVID-19
Next Up: Editor's Pick