Laura Linney at a photo call for "My Name Is Lucy Barton" on Broadway on Dec. 12, 2019 in New York City.
Bruce Glikas/WireImage—2019 Bruce Glikas
By Lucy Feldman

Two days after her final performance in the one-woman show My Name Is Lucy Barton on Broadway, Laura Linney was feeling a little dazed. “I’m completely disoriented now,” she said. “I sort of can’t believe it all happened.” For eight weeks, she had walked onstage and carried 90 minutes of drama, playing a woman looking back on a period of severe illness in an adaptation of Elizabeth Strout’s 2016 novel. It was a first for the 56-year-old Broadway, television and film veteran, who has racked up three Oscar nominations, four Tony nods and a mantel’s worth of Emmys. “I don’t think I had the experience to do it before now,” she said.

In a career spanning three decades, Linney has charmed viewers as a lovelorn graphic designer in Love Actually, breathed new life into First Lady Abigail Adams in the acclaimed miniseries John Adams and is now preparing for the March 27 release of the third season of Ozark, the Netflix drama in which she plays Wendy Byrde, the wife of Jason Bateman’s financial advisor turned money launderer for a Mexican cartel.

At the beginning of March, less than two weeks before Broadway would shut down indefinitely, Linney spoke to TIME about the subtleties of acting, having a child later in life and her one problem with Hamilton.

TIME: When you were first considering the role in Ozark and whether you wanted to be part of the show, you asked that Wendy be rewritten into a more complex character. Tell me about that process and how she has grown and become someone interesting for you to play.

Linney: It’s a great character, and that’s really all because of [showrunner] Chris Mundy and the writers. We all saw that there was potential for the lead character to have a partner who wasn’t just a superfluous spouse but someone who could add a dynamic that was not represented otherwise. There’s a whole sense of identity about Ozark. It asks questions of: Who are you? Who do you want to be? Who were you in the past? Particularly right now, given where we are in our country politically and culturally, we’re at a time where we’re all, hopefully, being forced to ask some uncomfortable questions.

When you’re acting with someone over a period of time, like Bateman, you both have your individual conceptions of your characters. But then there’s also this third thing, which is the relationship between them. How do you figure out what that looks like?

Well, you don’t. You let it tell you what it is. You can’t be too knowing about stuff. Jason and I work very, very differently, which is a lot of fun. He grew up in television, I grew up in the theater. I learn a lot watching him work. I always feel like if I’m not surprised at least once a day by something, then I’m cutting myself short and I’m depriving the story of a sense of life.

I love the idea of those surprises. What’s an example?

The way I can compare it is sort of like a recipe. I know there’s going to be flour, sugar, butter, this, that. But until I put them all together, I don’t know how they’re going to react to each other. In some ways, I prepare for a scene. But then I’ll show up on the day, and Jason and I will be in a room together, and he’ll do something that will just throw me for a loop—and my reaction will surprise me. Then we’ve learned something. That’s where the fun of it is.

You just finished your run performing My Name Is Lucy Barton on Broadway. How did you manage so many consecutive performances of a one-woman show?

It’s by far the hardest thing I’ve ever done, hands-down. And I don’t think I could have done it any other time in my life. It takes knowing yourself, knowing how to take care of yourself to execute something like that over a long period of time. It’s weirdly athletic in nature, and a completely unnatural thing to do, to be onstage alone and talk nonstop for 90 minutes. I’m so grateful that I did it. I’m also glad when they offered it to me, that I said yes quickly. Because if I had thought about it for too long, I would have gotten scared and said no.

You played two people, both Lucy and her mother, and they each go through such different emotions over the course of the show. How do you set yourself up to be able to reach all those levels?

That’s like a 300-page dissertation. It takes an enormous amount of work. You try and get to know the material very intimately. There is something to be said about just the repetition—you get better, the more you do it. Four years at drama school did not hurt. There are technical challenges; the language is complicated, so it has to be presented in a way that can be heard. There’s a physical stamina challenge. There’s a vocal challenge.

Did you avoid speaking for the rest of the day during this period?

Well, no. I have a small child, so that would have been awful for him. But my whole day was about staying healthy to do that show with the agility that it deserves—and hoping to do it with a sense of love, so I wasn’t someone who was put-upon by the responsibility but someone who would feel joyful in doing it. I’m so proud that I made it through. It’s changed me in ways that I don’t even quite understand yet.

Do you get stage fright?

Oh, sure. I get nervous all the time. Absolutely.

How do you deal with it?

You try to think as little about yourself and as much about the material as possible. Because at the end of the day, it has very little to do with you. I just try to get myself out of the way.

On the flip side, do you have any audience pet peeves?

Audiences are forgetting that they’re a crucial element of the whole experience, that they’re not passive witnesses. They help create the circulation in the room. And when they stop participating, it’s hard. When someone leans back in their chair without a sense of engagement or curiosity, that’s really disheartening, and you can feel it. There’s the phones, the rustling with the bags, the whispering, the falling asleep —they’ve lost respect for themselves in a way, and that just makes my heart sink.

You did an audiobook for Lucy Barton, as well. What was most surprising to you about that experience?

I’ve never done something like that before. It’s not a recording of the book. It’s not a recording of the show. It’s an audio recording of the script. It’s its own thing. I will never listen—maybe when I’m old in a nursing home. I grew up listening to old Shakespeare albums that my father had and loved them. I’m hopeful that maybe there’ll be a bit of a revival of that type of entertainment, people just listening. Language has gotten a bad rap recently. People don’t even spell words fully. For people to actually sit and listen to language and to the thought behind it is a great opportunity.

I have a Love Actually question.

Justice for Sarah! Do you wish that she had been able to actually have sex with Karl?

Well, sure. Of course.

Poor girl. Doesn’t she deserve a really nice night in the sack? I mean come on, of course she does.

I came across something you said about having become a parent later in life—which was also the case in my family. I’d love to hear if your perspective has changed as your son has continued to grow.

The basic foundation of my feelings about being a parent later in life certainly have not changed. More than anything it just deepens. The gratitude I have keeps expanding. And then just like any parent, you want your child to feel loved and safe and prepared. You try and stay in the moment with an eye to the future that’s responsible but not oppressive. You try to learn to navigate and enjoy life as best you can. Does that make sense? I know that sounds a little platitude-y.

It makes me want to call my parents.

Aw, yeah. There’s something about when you have a child later in life, and you’ve wondered, Why have I not had children up until this point? Why did it not happen? And then you have the child you have. And you realize, Oh, I was meant to have this child. And then it all makes sense.

It’s true. They were waiting for you. It had to be you. It had to be my son. It couldn’t be any other child, and you don’t want it to be. It’s a deeply wonderful thing to go through. Not an easy process and not easy to get there, but pretty terrific when it happens.

My last question for you is crucial: Did you see Hamilton, and if so, what did you make of the treatment of John Adams, who really gets the short-end of the stick?

I did. I had a moment. My lip twitched, I must admit. But I thought it was pretty funny. 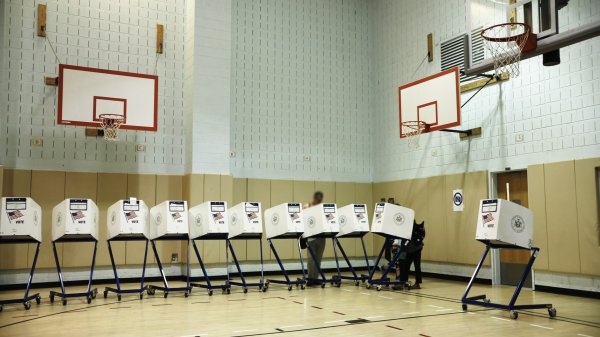 How to Secure the 2020 Elections
Next Up: Editor's Pick