This genuine instance of a human being in nature was made to be crystallized in the most enjoyable genre digital culture, the meme.

That’s because memes of reporters on-air are often popular and reflect very intense situations, it can’t just be engineered.

While it wasn’t captured on-camera, as Deion Broxton reported live from Yellowstone National Park for KTVM on Wednesday, he encountered a majestic bison herd and it was far too close for comfort.

“Oh my God. Oh my God,” Broxton said. Reasonable. “Oh no I’m not messing with you.” Wise. He then continued from a safe distance away from the large land animals.

The bison didn’t make the cut because they were off-camera. But they did break the 25-yard barrier. But just look at his eyes because his reaction to a legitimate bison herd just says it all. “They always say, ‘Stay at least 25 yards away from mammals. But that damn bison broke the 25-yard barrier and I was like, ‘I’m not dealing with this!’” Broxton told The Baltimore Sun.

It could have been a potentially very dangerous situation for everyone involved in filming. Luckily, everyone was safe, and Broxton and crew’s steadiness through the whole ordeal was admirable.

This is just the latest entry in a long list of memes in which people react appropriately to an uncertain, concerning situation. Of course, people imagined it was the perfect encapsulation of frightened feelings, which could never be divorced from the current climate. 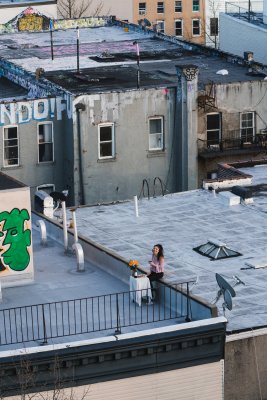 Here's the Story Behind That Viral Drone Meet-Cute
Next Up: Editor's Pick