Bernie Sanders May Be Losing, But COVID-19 Is Keeping Medicare for All Alive and Well

Members of National Nurses United union members wave "Medicare for All" signs during a rally in front of the Pharmaceutical Research and Manufacturers of America in Washington calling for "Medicare for All" on Monday, April 29, 2019.
Bill Clark—CQ-Roll Call/Getty Images
By Abigail Abrams

As the coronavirus pandemic overshadows the Democratic primary race, current and former progressive candidates’ ideas are enjoying an unexpected turn in the spotlight.

In response to the U.S. economy tanking, the federal government has moved to provide relief in a range of ways that would have seemed like far-off liberal dreams just months ago. The Department of Housing and Urban Development halted foreclosures and evictions during the emergency; the Department of Education slashed federal student loan interest rates to zero and will allow borrowers to completely suspend payments if needed; Congress is negotiating a plan to send direct cash payments to families; and a version of paid sick leave just became law.

But the COVID-19 outbreak has also proven as good a reason as any for advocates to renew their calls for the ultimate progressive agenda item: Medicare for All.

“Everybody’s seeing that it’s in the interest of all Americans that everyone gets the health care they need when they need it,” says Kelly Coogan-Gehr of National Nurses United, the country’s largest nurses union and one of the most prominent groups campaigning for Medicare for All.

As the number of diagnosed COVID-19 cases in the U.S. shoots up and stories of high hospital bills proliferate, more than two in five Americans say the epidemic has increased their likelihood of supporting universal health care proposals that involve the government providing all Americans with health insurance, according to a recent Morning Consult poll. In exit polls in nearly every state that has held a presidential primary contest so far, a majority of Democratic primary voters have said they support a single government health plan, which is what Medicare for All would bring about.

With the Democratic field narrowed and Senator Bernie Sanders all but eliminated by former Vice President Joe Biden’s victories, Medicare for All advocates say they must capitalize on this moment. One short term goal, they say, is to separate the Medicare for All policy from the handful of candidates who most strongly advocated for it. Democratic and Independent voters who supported Sanders and Senator Elizabeth Warren, for example, overwhelmingly favor Medicare for All, according to a February poll conducted for health care activist Ady Barkan’s Be A Hero PAC. But so do those who have supported Joe Biden, and former Mayors Pete Buttigieg and Michael Bloomberg.

Liz Jaff, the president of Be A Hero, says that Barkan’s group plans to explicitly reach out to Democrats who supported more moderate candidates, but who may favor Medicare for All. Republicans and moderates have pushed the message that “this is only tied to Bernie Sanders,” she says, “and so if you don’t like Bernie Sanders, you can’t like Medicare for All.” But in light of the Be A Hero poll, which found that 75% of all Democratic and Independent voters favored the policy, the group is casting a wide net.

“We cannot let Medicare for All, which is supported by three out of four Democrats, fall off the surface,” Jaff says.

Next week, Be A Hero and National Nurses United are planning a substantial digital and television ad buy targeted to general election swing states and places with competitive Senate races this fall. Rather than promoting a single candidate, the ads will focus on individual people’s health care stories, in an effort to underscore the need to overhaul the country’s health care system, especially in light of the COVID-19 crisis.

The groups plan to place ads describing people’s immediate health care needs due to the pandemic, while simultaneously making the case for Medicare for All, Jaff says.

In the lead up to Super Tuesday, Be A Hero PAC spent $500,000 on advertising across nine states. The group found that ads that combined stories about individuals’ health care struggles with a direct push for Medicare for All resonated broadly with Democratic voters in most parts of the country. In the Midwest, ads did much better when they centered on basic messages like “it should be the right for anyone to be able to go to the doctor instead of suffering at home in silence.”

“The only way to build real momentum for this in the long-term is growing our tent, and playing the long game of addition,” Be A Hero’s co-founder Barkan tells TIME. “We need to keep growing our movement for Medicare for All, and I’ll do my part to keep doing that by sharing my story and bringing new people in.”

National Nurses United has also found success in advocating for Medicare for All by appealing to individuals’ personal frustrations with the existing health care system. In the past, the union has spearheaded an ambitious door-knocking campaign in support of Medicare for All, Coogan-Gehr says. During voter interactions, the nurse-advocates would ask to hear people’s experiences with the American health care system. Those conversations would allows them to explain how they want to change the system, she adds.

Barkan, who is dying of amyotrophic lateral sclerosis (ALS), has used this same strategy of focusing on his own health issues to become one of the country’s most prominent Medicare for All advocates, building a large following online, and helping earn the policy its first-ever Congressional hearing last year. The Be A Hero email list is roughly split between Sanders and Biden supporters, Jaff says.

In the past, the left has struggled to bring mainstream Democrats on board with Medicare for All, says Sean McElwee, co-founder of the progressive think tank Data for Progress. “At the end of the day there ended up just being a large enough share of the Democratic electorate that really did not feel like they had been brought into Bernie Sanders’ movement,” he says. To succeed, he adds, progressives must cast a wide net, inviting those who disagree with Sanders on certain policies, but agree on the principles, into the the fold.

“The progressive movement, if it wants to be serious politically, needs to have that approach to governing, which is we build tools, we have power, we have influence, we have connections,” he says. “No matter who the presidency is we will at least have our view heard. We may not always win, but we will not always lose and our voices will always be at the table.”

In recent days, Sanders has repeatedly connected the challenges surrounding the COVID-19 outbreak to his critiques of the existing U.S. health care system. On March 10, when Sanders lost primaries to Biden in Idaho, Michigan, Mississippi, Missouri and Washington, Sanders’s high-profile surrogate, Rep. Alexandria Ocasio-Cortez encouraged her supporters by telling them they were “winning on the issues” and urged them to use the popularity of progressive ideas to push Biden to the left.

While Coogan-Gehr says her union is committed during the COVID-19 crisis to ensuring that all nurses have the equipment they need to handle the outbreak, she expects the political landscape post-crisis to be different. “The message cannot be more clear,” she says, “that Medicare for All is one of the most unifying issues for voters in the Democratic Party.” 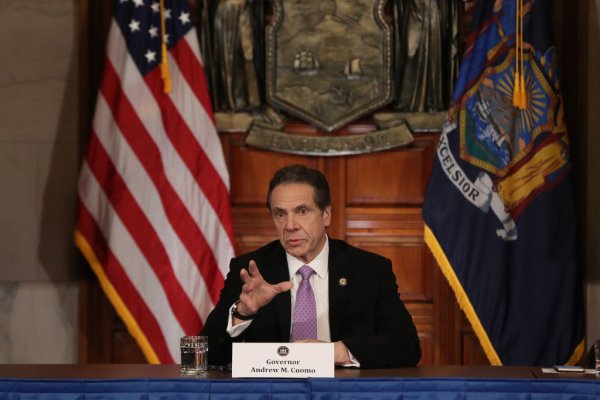