Behind the Covers of TIME's Special Coronavirus Issue

This week’s issue of TIME is centered around a special report on the current coronavirus pandemic. It features six different covers, each with a portrait of individuals directly impacted by the virus, ranging from the tragically hard-hit Life Care Center in Kirkland, Wash., to the balconies of Tehran and the streets of China. Together, they offer a sense of how COVID-19 is forcing regular people around the world to adapt to a new reality.

When photographer Angela Strassheim went recently to visit Cheryl Chutter in Stamford, Conn., she was there not on assignment, but as a friend. Chutter, 51, was diagnosed with COVID-19 on March 17.

Chutter was on her first day of quarantine, and Strassheim had come by to leave some food for Chutter and her son outside the door. As she approached the house, she saw Chutter in the window wearing a face mask, and was struck by how powerfully the mask seemed to visually convey the frustration, fear and isolation her friend was feeling. Strassheim asked if she could take a quick photo on her iPhone, and came back the next day with her camera. “For me it sums up where we are at right now. We are all imprisoned in our homes and the window is like a mirror to look back at ourselves,” she says. “You are that same person in your own home whether you have the mask on or not.”

Chutter thinks she was infected when she attended a birthday party in Westport, Conn., in early March. About a week after the gathering, she learned that one of the attendees, who had recently traveled abroad, had tested positive for COVID-19. By then, she had already been once to a hospital and once to an urgent care facility due a high fever, chills, body aches and utter exhaustion. But it was only after she discovered she’d been in contact with someone at the party who was diagnosed with COVID-19 that she was able to get a test, since kits were so scarce.

When she finally received her positive test result on March 17—after eight days in quarantine—she said one word: “Relief, I felt relief. I knew now that my dad can get tested. I just want to be safe. I want to take care of my son, be considerate to other people and I don’t want to leave my house till quarantine is over.” Since the party, 20 attendees have tested positive.

Entering her second week of quarantine, Chutter is trying to stay positive, but the social isolation—especially the forced estrangement from her son—is emotionally challenging. “I was told to have as little contact with my son as possible,” she says. “I can’t prepare meals for him. I wear a mask and gloves in the house. I can’t be near him.” —Paul Moakley and Alice Park

For the last three weeks, Lori Spencer has only been able to see her 81-year-old mother, Judie Shape, through a glass window. Spencer checked her mother into the Life Care Center nursing home in Kirkland, Wash., on Feb. 26. Since then, the facility has become one of the epicenters of the COVID-19 outbreak in the U.S.: at least 30 deaths have been linked to the Center.

After other facility residents tested positive for COVID-19, Shape tried to get tested herself, but says she had to wait 11 days. Facility officials have said they didn’t have enough tests for residents as the outbreak spread, according to the Associated Press. Spencer describes the ordeal as “surreal and maddening.”

Eventually, Shape tested positive. Spencer continued to visit her at the Life Care Center, but they had to stay separated by a window. Independent photographer David Ryder’s image of the mother and daughter communicating through this barrier gained attention after being published by Reuters. On assignment for TIME, he returned to the facility on March 17 for a posed portrait of the duo. Given the situation at Life Care Center, Ryder was not allowed on the premises, so he set up about 100 feet away, used a powerful zoom lens and had to call Spencer on her cellphone to work with them on their position at the window. Ryder says the core intent of the photograph was to convey “loved ones trying to connect.”

“This is the strangest situation where someone’s going through something so difficult with this disease… and you can’t hug them,” Ryder says. “And even the comforting voice, you can’t even really hear that except through a phone, which isn’t quite the same.”

For Spencer, the window that separates her from her mother signifies a lack of control. “When I look at that glass, what it means to me is that there was no more control, no matter how much you love the person on the other side,” Spencer says. “All control was lost.”

Shape is doing well now, despite the difficulties, Spencer says. “At least I can see my mom.” —Andrew Katz and Sanya Mansoor

Since the outbreak erupted in China, Gao Zhixiao, a 32-year-old delivery driver living in Beijing, has had to take a health test and spend 20 minutes disinfecting his motorcycle and clothes every day before setting off on his route. Without drivers like Gao, who works for delivery giant Meituan, to bring goods to their homes, families would go hungry and the sick wouldn’t get vital supplies. Luckily, Gao has not contracted COVID-19, but he puts his health at risk every day.

As the virus spread in Iran—one of the hardest-hit countries to date—Elmira Laki, 30, decided to self-quarantine at the Tehran home of her sister Elahe, 33, just to be cautious. In this image from March 3, Elmira stands on her sister’s balcony; Elahe’s face can be seen reflected in the window through which the photograph was made.

After learning he’d been exposed to someone with COVID-19, Patrick Walker, a 52-year-old tech entrepreneur and cofounder of the startup Uptime, began self-quarantining at his London home on March 9. Five days later, he tested positive for the virus. “I’m living proof [the coronavirus] can be picked up sitting in a meeting with somebody,” says Walker. “A lot more people have it than they think right now.”

This March 18 portrait shows him outside his home with his wife Noemie Olivero Walker, and young children Henri and Celeste—all of whom have tested negative so far.

COVID-19 has hit northern Italy harder than almost anywhere else in the world. In a bid to stop the spread of the virus, Italian authorities imposed travel restrictions—expected to last until at least early April—on the country’s 60 million residents. Fulvio Avantaggiato, 60, is an emergency room radiologist at the San Matteo Hospital in Pavia, in northern Italy; when he’s not working, he self-quarantines away from his wife and daughter at their home. 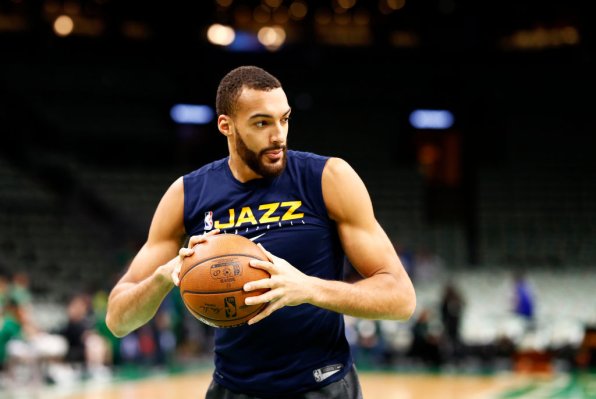 Why Can the Utah Jazz Get Coronavirus Testing, But I Can't?
Next Up: Editor's Pick