West Virginia Just Became the Last State to Report a COVID-19 Case. It Was Only a Matter of Time

A dummy COVID-19 swab outside its sealed sterile tube during a demonstration.
Photo by Ben Birchall/PA Images via Getty Images)
By Jamie Ducharme

Every U.S. state has now reported at least one confirmed case of COVID-19, following a positive diagnosis out of West Virginia.

West Virginia Gov. Jim Justice confirmed the case Tuesday evening, saying it had been detected in the state’s Eastern Panhandle. “This is real and it’s really concerning,” Justice said.

The case comes just a day after President Donald Trump praised Justice—who he called “Big Jim” at a Monday press conference—for “doing a good job” in keeping West Virginia free of COVID-19. Doctors, lawmakers and West Virginians were quick to point out, though, that the state’s conspicuous lack of COVID-19 cases was likely due to limited testing capacity, rather than a singular stroke of public-health preparedness.

Justice on Monday declared a state of emergency, while Sen. Joe Manchin tweeted earlier on Tuesday that “West Virginians should not let their guard down on #coronavirus just because we don’t have a confirmed case. We need to act now to prevent a catastrophic outcome for our state.”

Pamela Brannon knows about the state’s limited testing capacity as well as anyone.

She returned from a month-long trip from Uganda on March 8. About a week later, a cough unlike any she’d had before settled deep in her chest.

Brannon, 54, called her doctor on March 14, asking where she could get tested for COVID-19 near her home in Charles Town, W.V. She was transferred to a public health hotline where the answer came back in minutes: she couldn’t get tested, at least not in West Virginia.

“There are no cases [in West Virginia] because they’re not testing,” Brannon told TIME Tuesday afternoon, shortly before the state’s first case was confirmed. “The thing that’s so scary about that is it’s going to give people a sense of false security.” She says she is not afraid for herself, but for those with poorer health and fewer resources than she has.

People in every U.S. state have been turned away from medical centers unable to meet demand for COVID-19 testing, due to slow rollout of testing kits to public-health agencies and stringent criteria meant to preserve available tests for the highest-risk patients. But in West Virginia—a state with among the worst health outcomes in the country, and where about a fifth of adults do not have a health care provider—the situation has been especially bleak.

State health officials said only 84 West Virginians had been tested as of March 17, and only 500 test kits were available for the state’s roughly 1.8 million residents.

Those 84 people had to meet a strict case definition to get tested. According to a statement issued March 16, the state is prioritizing testing for patients with respiratory symptoms or concurrent underlying conditions serious enough to require hospitalization and who have no other explanatory diagnosis, as well as people who are showing symptoms such as fever, cough and shortness of breath; have had close contact with a confirmed COVID-19 patient or traveled to a heavily affected area; and have no other explanatory diagnosis. Providers must consult public health authorities before completing testing.

There are signs that testing capacity is improving, both in West Virginia and nationwide. West Virginia State Health Officer Dr. Cathy Slemp told West Virginia’s Metro News that availability of tests should improve as private labs roll out their tests, supplementing public-health supplies. A spokesperson at WVU Medicine, the state’s largest health care provider, also said it is working to develop its own test.

While they’re a step in the right direction, those steps provide little solace to patients like Brannon.

Brannon’s journey to testing spanned three different states. After being turned down in West Virginia, she called a hospital in Virginia, which told her she couldn’t get tested without authorization from her doctor. With few options left and ever-worsening symptoms, she drove to a hospital in Frederick, Md., where she waited about four hours to get medical attention. Even then, protocol mandated that doctors first test her for the flu and other respiratory illnesses, to rule those out before moving on to COVID-19.

Late Tuesday evening, Brannon learned she had tested positive for respiratory syncytial virus (RSV), which typically causes cold-like symptoms but can be more serious for infants and older adults. She was told she likely did not have both RSV and COVID-19 and sent home.

Even still, “I don’t feel 100% confident that I don’t have it,” Brannon says, noting that she lives not far from where the first COVID-19 case in West Virginia was confirmed. She plans to self-quarantine for two weeks, just in case.

“I can’t believe what I’ve been through in the last few days. It’s incredible,” Brannon says. “Why did I have to drive 45 minutes from my home to get this test? I am worn out. I just want a bath and my bed and my dog.” 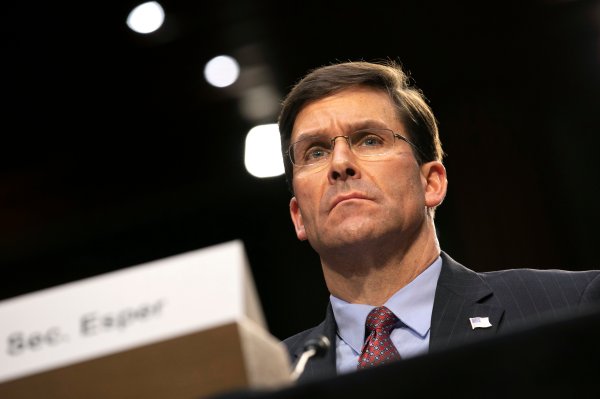 The U.S. Military Has Joined the War Against the Coronavirus. But Its Firepower is Limited
Next Up: Editor's Pick