Why Can’t I Get Tested for Coronavirus?

Medical personnel swab a driver’s nose at a drive-through testing site for coronavirus for employees at UW Medical Center - Northwest in Seattle on March 13, 2020.
Brian Snyder—Reuters
By Alice Park

As more cases of COVID-19 are reported around the world, medical advice about who should be tested for the coronavirus infection is constantly changing to reflect changing levels of risk for infection. And the Food and Drug Administration, which regulates and authorizes all medical tests, is warning the public about fraudulent tests and companies that are exploiting people’s concerns about the disease. In particular, the agency is alerting people to unauthorized tests for detecting the virus at home, without the need for any lab involvement.

The emergence of these unauthorized claims only highlights the demand for information and access to testing. Here’s how doctors are deciding who to test, and when.

I have a fever and a cough. Can I get tested for COVID-19?

Not necessarily. COVID-19 symptoms include fever, cough and difficulty breathing. But those are also symptoms of the seasonal flu, so doctors will first make sure you don’t have the flu or other common respiratory illnesses. Most hospitals and some urgent care centers can run a test for those and for some types of pneumonia. In most cases, results take a couple of hours. (Doctors’ offices can order these tests, in which case it may take a few days.) If those results are negative, then doctors might consider ordering a COVID-19 test. But before doing that, they will ask you more questions to determine how likely it is that you were exposed to the virus.

“All folks who come to the hospital with symptoms go through risk stratification per the Centers for Disease Control [guidance],” says Dr. Dan Varga, chief physician executive at Hackensack Meridian Health. This includes asking about whether you traveled in the past 14 days to places with high numbers of cases, or if you had close contact with someone who tested positive. At the University of California Los Angeles Medical Center, doctors are following California department of health guidelines that limit testing only to people with symptoms who need hospitalization and have traveled to affected countries or been in contact with people who tested positive. Columbia University Medical Center in New York is also only testing those who are sick enough to need hospitalization.

The U.S. Food and Drug Administration (FDA) and Centers for Disease Control and Prevention (CDC) have, however, loosened these criteria and currently allow doctors to use their own discretion about other circumstances that might warrant testing for people with symptoms. These might include being in a public location where infected people had been. Another example might be a health care worker who cared for a person diagnosed with COVID-19. According to Dr. David Buchholz, senior founding medical director of primary care at Columbia, it’s important to know if health care workers are infected, so they can be isolated and not spread the infection to others in the hospital.

I have symptoms and my doctor wants to order a test, but the state or local health department won’t test me.

This is a direct result of the limited number of testing kits that have been available to date. When state and local public health departments had the only test kits that were available, health officials there made the decision about who to test. “Essentially up to now the test was being rationed to people where it might make a difference,” says Buccholz.

But that is quickly changing, as commercial testing labs are rolling out thousands of tests a day. And any physician can order tests through these companies, although many are still following certain criteria in deciding which people need them. (See below)

I don’t have any symptoms but I use public transportation where people are coughing and sneezing. Can I get tested?

At the moment, probably not. “Certainly nobody who has no symptoms at all and has not had contact with anybody who is known to have COVID-19, should be running out and getting tested,” says Dr. Daniel Kuritzkes, chief of the division of infectious diseases at Brigham and Women’s Hospital.“

While doctors have discretion on ordering tests, most depend on some type of risk assessment, based on CDC guidance, to decide how likely it is that people asking for the test were exposed to the virus.

It’s worth noting that different doctors may assess risk in different ways, however, so some providers may be more willing to order tests than others. The number of tests available also factors into their decision. “We’re still not ready to test people just because they want to know because we don’t have even tests,” says Buchholz. Until recently, testing kits have been limited, so doctors have been reserving tests for those who were most likely exposed and would test positive. (That should change this week, as more commercial testing labs produce tests that doctors can order.)

Doctors are also keeping in mind that people who couldn’t be tested but have been asked to self-isolate just in case, will need to be tested in order to clear them to return to work. (The CDC says people should have two negative tests to confirm they aren’t contagious.)

Buccholz also notes that testing people who don’t have symptoms isn’t necessarily helpful, since it’s possible that if people who are infected get tested very soon after their infection, they might be negative.

Testing people without symptoms in the general population falls into the category of public health screening, and the goal there is to get a better handle for how widespread an infection is in the community. While this is important to know, it’s not as critical at this point in the pandemic as finding people who need treatment immediately.

I don’t have symptoms but I might have come into contact with someone who tested positive at work. Can I get tested?

As capacity for COVID-19 testing grows, this is likely the next group that would be eligible.

Right now, however, these people would most likely be turned away. For example, most of Massachusetts’ nearly 100 cases came from a company meeting held in Boston that was attended by several people who had recently traveled to Italy and became infected. At the time, meeting attendees who didn’t have symptoms but wanted to be tested at emergency rooms were turned away because they weren’t sick.

“Even in those cases, we would not recommend that people go to the emergency room for testing,” says Dr. Aimee Moulin, associate professor of emergency medicine at University of California Davis. “At the emergency room, we are trying to focus on patients who are symptomatic.” They simply don’t have a testing capacity for an entire community, she says.

If I have symptoms, where should I go to get tested?

Because COVID-19 seems to be highly contagious, doctors are urging people with fevers and cough to not walk into emergency rooms or make appointments at their doctor’s office. Call first, describe your symptoms and then follow your doctor’s advice about whether you need to be tested.

If you need testing, you may be directed to special COVID-19 testing facilities, including drive-through units or tents outside emergency rooms where you would minimize your contact with others.

These practices may change as the outbreak evolves, say experts, and it’s likely that in coming weeks as more tests are available, more groups of people would be eligible for testing, including those with respiratory symptoms that can’t be linked to flu. Broader testing of people without symptoms may also be possible, as public health officials try to learn important information about how deeply the virus has penetrated a community, and how many people can be infected with no symptoms or only mild ones. “But we’re still days or weeks away from having that kind of testing capacity,” says Kuritzkes. 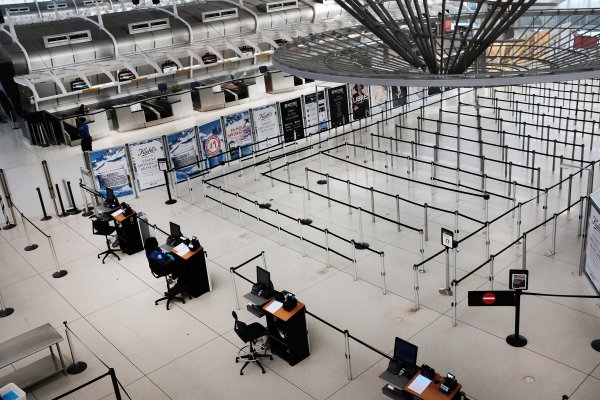 We Are in a Geopolitical Recession. That’s a Bad Time for the Global Coronavirus Crisis.
Next Up: Editor's Pick