While a bunch of marbles barreling down a sandy path may not be as riveting as an intense game, competitive marble racing is exciting the internet to no end in the wake of COVID-19 leading to the cancellation or postponement of almost all major sporting events.

With the World Health Organization declaring COVID-19 a pandemic on March 11, professional sports leagues including the NBA, MLB, NHL and MLS have all suspended their seasons, leaving a hole in the hearts of sports lovers everywhere.

Luckily, marble racing, a competition that requires no human interaction and therefore adheres to the rules of social distancing, has emerged as a perfect sport for the coronavirus era. The races feature colorful marbles with names like Comet and Pollo Loco speedily making their way through fantastically detailed courses until they’re either knocked out or reach the finish line.

Kevin Edwards, a Stanford University student who works with the NFL, tells TIME that he recently discovered the world of marble racing after seeing some fellow sports fans talking about it on Twitter.

“I work in sports and also am a big sports fan, so with the shutdowns of all the leagues, I had a gap in terms of entertainment. I just missed sports a lot,” he says. “I figured, I have the time, why not give [marble racing] a watch?”

For some, marble racing is nothing new. YouTubers Jelle and Dion Bakker, who started the popular YouTube channel Jelle’s Marble Runs, founded the Marble League in 2016 and have since created a number of other marble racing events, including Marbula One (Formula 1 for marbles) and Marble Rally (marble racing on sand tracks). The 2020 season of Marbula One is currently ongoing. The competitions have also surged in popularity on the live streaming platform Twitch.

Jelle, who specializes in building elaborate tracks for racing multiple marbles, told Vice in 2016 that he became interested in marble racing after getting a track as a gift from his parents. “I have a form of autism and I’m really interested in moving things, sounds, lights, et cetera,” he said.

The top three teams from the prior year’s Marble League automatically qualify as does that year’s chosen host team, leaving 12 open spots. In 2019, the top three teams were the Hazers, the Green Ducks and, in first, the Raspberry Racers.

Edwards says that he thinks the fun team and individual marble names are part of what makes watching the races so entertaining.

“You can pick a team based on nothing other than the name. A lot of sports are association-based, but with this one it’s like, do you like Green Ducks or Raspberry Racers? That can be your team,” he explains. “I’m a big Packers fan so I’m partial to the color green so I chose the Green Ducks.”

For Elijah Daniel, another recently converted marble racing fan, the biggest draw of the Jelle’s Marble Runs videos is commentator Greg Woods, who provides the English play-by-play for each race.

“It’s enthralling to watch,” Daniel tells TIME. “And I think it has to do a lot with the commentary because the guy is so on top of it. Like he refers to [the marbles] as players. It’s just funny.”

Edwards adds that Woods’ commentary is much like that which accompanies the live broadcasts of professional sports.

“The commentating really is good,” he says. “It does resemble real sports in a lot of ways and he approaches it with a professionalism that wouldn’t normally align with something as silly as marble racing, which adds to the entertainment value.”

As for why marble racing has struck such a chord with people in the midst of the coronavirus outbreak, Edwards says that he thinks it’s because it can be a fun diversion for those who are feeling anxious.

“I think the beauty of sports is that they’re an escape for a lot of people and that escape is missing at a time when people need it the most,” he explains. “So while [marble racing] certainly isn’t a sport in the traditional sense of the word, it’s maybe helping to provide that escape for people, myself included.”

For his part, Daniel is on board with anything that keeps people inside right now.

“There’s a lot of people staying inside and not doing anything, so keeping them inside is what’s important,” he says. “I watched it for hours yesterday without even realizing it.”

The Marble League 2020 season is set to start in June. But, in the meantime, numerous videos of past Jelle’s Marble Run events are available to watch on YouTube. 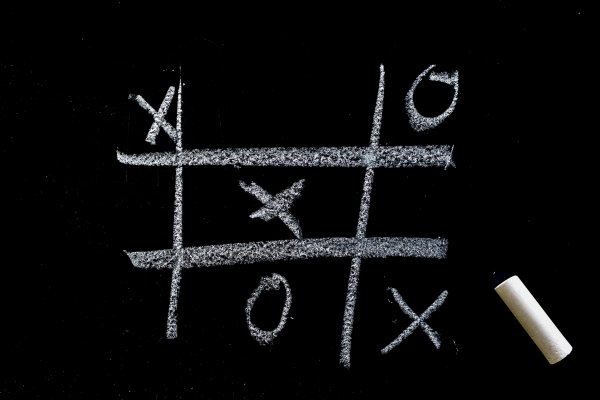 People Are Playing Very Hypnotizing Tic-Tac-Toe Games With Their Pets
Next Up: Editor's Pick