The Democrats Need to Sing a New Tune to Beat Trump

Democratic presidential candidates former Vice President Joe Biden and Sen. Bernie Sanders (I-VT) participate in the Democratic presidential primary debate in Manchester, N.H. on Feb. 7, 2020.
Joe Raedle—Getty Images
Ideas
By Harry Boyte and Trygve Throntveit
Harry Boyte, Senior Scholar in Public Work Philosophy at Augsburg University, was national coordinator of the Reinventing Citizenship project with the Clinton White House and co-chaired the civic engagement policy committee for the Obama campaign in 2008. Trygve Throntveit, Lecturer in Organizational Leadership, Policy, and Development at the University of Minnesota, is a prize-winning historian of American thought and politics and editor of The Good Society: A Journal of Civic Studies.

It may sound crazy, but the Democrats are singing Trump’s tune. We need a different song.

Sure, the two parties are miles apart on everything from healthcare to immigration. The consequences of a second Trump term should be clear to most voters by now. Yet Democrats’ chances of beating Trump are increasingly uncertain.

Why? Because, unconsciously, they mostly hawk the president’s product: a politics of grievance designed for disgruntled consumers and clients rather than self-governing citizens.

Trump promises a booming economy and attacks supposed enemies of his version of “the people.” “I’m the only thing standing between them and you,” he tweeted after his impeachment acquittal. Democrats target billionaires and corporate villains, while promising new benefits delivered by government, from free health care to free college.

In other words, the Democrats’ jingle has different lyrics but conveys the same message: “We know you feel powerless, threatened, and wronged by your government and your neighbor. Let us take care of it—and them.”

Bernie Sanders’s victory in the Nevada caucuses showed that this tune carries with a passionate and activated minority (4% of Nevadans participated). But in a time of low unemployment and (slightly) rising wages, a campaign joining grievance with indictment of a rigged economy and provision of new goodies strikes the wrong note for much of the American middle class—including the Democratic conservatives and moderate liberals who handed so many Trump districts to Pelosi’s party in the midterms.

As Joe Biden’s Super-Tuesday resurgence showed, many voters want a more inclusive message than Sanders is willing to send. Biden, however, has so far failed to explain how his version of inclusion will be any different from past versions that promised good things to all Americans but gave them little say in what those good things were, and almost no role in creating and sustaining them.

Democrats—and the American people—must learn again to sing of We the People.

This anthem has roused Americans of different backgrounds and persuasions since 1787. It celebrates the dynamic tension of individual and common interests and the role of the governed in the work of self-government. We the People is a public work-song; a song of Americans rolling up sleeves and sharing tools to address common problems and build common goods. As E. J. Dionne and Kayla Drogosz write in the introduction to United We Serve , the “essence of the democratic project entails not altruism, or not only altruism, but enlightened self-interest—a desire to build a society in which the serving citizen wants to live.”

To sing of We the People is to defy the people’s erasure from the covenant that binds them to their government and one another.

Plans advanced by Democratic candidates are certainly preferable to sealing borders, bullying partners, dismantling international organizations, and repealing environmental and health regulations. But the plans on offer are not enough to inspire an electorate or revitalize our democracy.

For decades, Americans have heard from both major parties that their grievances will evaporate if they vote for the candidate with the right plan. Most have been disappointed, and their sense of exclusion and powerlessness has grown. The exceptions to this pattern dramatize the thinness and danger of a customer-service model of politics that can easily morph into messianic authoritarianism.

When Franklin Roosevelt proposed the Civilian Conservation Corps to the 73rd Congress in 1933, his focus was on catalyzing their individual and social contributions to the democratic experiment. “More important than the material gains,” Roosevelt said of the CCC, was “the moral and spiritual value of such work.” As he had stated in his inaugural address, the “dark days” of the Depression “will be worth all they cost us if they teach us that our true destiny is not to be ministered unto but to minister to ourselves and to our fellow men.”

Bill Clinton and Barack Obama both revived a message reconnecting government “for” the people to the other elements of Lincoln’s trilogy: government “of” and “by” the people.

In 1992, Clinton joined “community, responsibility, and opportunity” by emphasizing citizenship. “America needs to restore the old spirit of partnership, of optimism, of renewed dedication to common effort,” he said during the campaign. The message took shape in a cross-partisan initiative from 1993 to 1995 called “Reinventing Citizenship,” a partnership between the White House Domestic Policy Council and a diverse group of civic leaders, universities, foundations, religious groups and others to address the gap between citizens and government.

The initiative also shaped President Clinton’s 1995 State of the Union, called “A New Covenant.” “As we enter a new era, we need a new set of understandings, not just with government, but even more important, with one another as Americans,” Clinton said. “…Opportunity and responsibility: They go hand in hand.”

The effort had accomplishments, like a National Commission on Civic Renewal, but it also came up against an entrenched political culture which imagined citizens as customers of government, not as civic partners.

It was highly significant that the public work-song reappeared in 2008. Barack Obama took the message of citizenship from the Clinton years and grassroots democracy which he had learned from community organizing to the nation in the 2008 campaign, amplifying its themes and engaging millions of people. “I’m asking you not only to believe in my ability to make change,” read the campaign website. “I’m asking you to believe in yours.” The message was expressed in such memorable campaign slogans as, “We are the ones we’ve been waiting for,” drawn from a song of the freedom movement of the 1960s. And it infused Obama’s field operation. As Rolling Stone reporter Tim Dickinson noted, the goal was “not to put supporters to work but to enable them to put themselves to work, without having to depend on the campaign for constant guidance.”

In his 2008 election night victory speech, President-Elect Barack Obama asked Americans “to join in the work of remaking this nation.”

After the election, faced with a global economic crisis and the entrenched powers of interest group liberalism, the Obama policies reflected few of the policy ideas of the campaign. But it is highly significant that, over the last thirty years winning presidential campaigns on the Democratic side included strong messages of citizenship.

“We the People” language is reappearing now, fittingly among everyday Americans working to repair the body politic and the machinery of government. These efforts reclaim the dignity and civic role of citizens from the bottom up.

Take the burgeoning Better Angels movement, challenging the “takeover” of politics by the impresarios of polarization. At their 2019 convention, the delegates—half self-identified “reds,” the other half “blues”—invoked “We the People” in resolving “to dedicate ourselves to the great task before us.” That task was not to throw the bums out, but “to renew our trust in one another and build our civic muscle,” striving “for the ‘beloved community’ of Dr. Martin Luther King … and the ‘more perfect Union’ of the Founders.”

Other cross-partisan citizen efforts to fix democracy are highlighted in a new documentary, “The Democracy Rebellion,” airing now on public television. It shows citizens repairing the machinery of elections, efforts to ban corporate campaign contributions, end gerrymandering, prevent voter-suppression, and secure public campaign financing. “I’ve long had the idea that I’m continuing the American Revolution,” says Linda Block, who collected 21,000 signatures in Washington State in 2016 to curtail corporate campaign contributions. “Every signature I get I see as a check for the power of ‘We the People.’”

Want to win the presidency and extend democracy’s longest-running show? Emphasize a citizenship message for government to be a partner, not a savior.

Then sing your heart out. 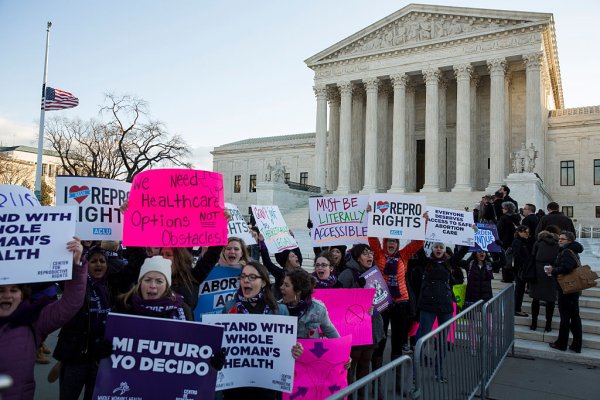 Supreme Court Should Uphold Abortion Rights
Next Up: Editor's Pick