I Found Refuge in Turkey After Suffering in Syria's War. Now I Feel Like I Have to Leave for Europe

Syrian rebel fighters take their positions on the frontline of the ongoing battle for the military airport in Taftanaz, Syria, on Jan. 6, 2013. Photo by the author.
Mustafa Karali—AP
By Mustafa Karali

Mustafa Karali is a freelance photojournalist and founder of Duzen, a humanitarian organization that runs art, culture, and filmmaking workshops for Syrian and Turkish youth in the border city of Gaziantep. A Syrian national, he worked with reporters James Foley and John Cantlie to cover the uprising against Syrian President Bashar al-Assad in 2011. The trio collaborated on multiple stories together until jihadists kidnapped Foley and Cantlie, and forced Karali, then their translator, to flee at gunpoint. After 21 months as an ISIS hostage, Foley was brutally murdered in 2014, in an execution filmed by his captors. The whereabouts of Cantlie remain unknown.

I first met James and John at a protest in my hometown of Binnish, in northwestern Syria. They were taking photos and I was working with local media. I wasn’t a professional photographer, just a guy with a camera. They came to my home and we ate barbecued chicken. I remember John looked through the images on my SD card and he said, “f*** you, you’re not a photographer.” I got so angry. But I said, “okay then, teach me something.” He agreed, but he said he would tell me the truth about my work, and if I got upset, he’d stop teaching me.

John taught me so much about composition and framing; how to shoot fighters on the front lines. James taught me how to work safely because I didn’t have any war reporting experience: how to take different routes to avoid snipers and what to do during shellfire. They were great teachers. John put me in contact with news agency the Associated Press and I started shooting for them.

The day James and John were kidnapped we were trying to get out of Syria. James had shrapnel in his leg and medics at the local field hospital couldn’t take it out. We decided to go to Turkey for treatment but we stopped at an Internet cafe on the way. A jihadi with a beard and a beret came in while we were uploading files. John called out to him, “Che Guevara!” The man looked at us, opened his laptop for one or two minutes, closed it, and left. I knew we were in trouble. James was angry at John for drawing attention to us.

We told a taxi to take us to the border but on the way, a van approached fast from our left. There were armed men inside wearing masks, four or five of them. They signaled for us to stop. I told the driver to keep going, so did John. James told him to stop because they might shoot at us. The driver was confused. He stopped.

One of the gunmen got out and fired bullets into the ground. I didn’t know what to do. They said, “why are you with these men?” I said, “I am their friend.” They asked me where I was from and I told them Binnish. They asked for my ID. Then they said, “go.” I said, “I won’t go without my friends.” The man pointed his gun at me and said, “if you don’t go now, I will kill you here.” John looked at me and said “not again. Help me.” He had been kidnapped before. I remember, he said it twice. “Not again.” I had tears in my eyes. “I will help you, bro,” I said. Then the taxi driver said, “Mustafa, let’s go.”

John Cantlie with a Free Syrian Army fighter in in Aleppo, Syria, on Nov. 06, 2012. The photo was taken by the author.

After the kidnapping, I was traumatized. I couldn’t work for six months. Eventually, my producer at AP called and said “what’s happening Mustafa? Why are you not sending photos?” She told me my work was important and encouraged me to continue. She gave me hope and I went back to work, photographing the revolution. In late 2014, I went to Turkey to attend workshops run by Human Rights Watch and Witness, a humanitarian organization that trained me to collect video evidence of war crimes committed by Assad’s forces and armed factions.

By the time I returned to Syria, conditions had worsened. If you wanted to take pictures in the northwest, you had to grow your beard and dress like a jihadi to be left alone. At checkpoints, militants would question me and take my camera and laptop. I was followed everywhere, even away from the front lines just taking photos of civilians at refugee camps.

The space for free movement was getting smaller and smaller and I was kidnapped twice more. The second time I think my captors were from Al Nusra, a jihadist group then aligned with Al Qaeda, but I can’t say for sure. They held me for two days and accused me of everything: being a thief, working for the U.S. government, working for ISIS. One of the guys dragged me outside. He made me get down on my knees. He loaded a Kalashnikov and put it against my head. My life flashed before my eyes the way it does in films. Then the gunman shot a single bullet into the ground in front of me, right next to my ear. I thought I had been executed, but I could still see and hear. I was touching my head to find the wound. The guy said we are not going to kill you this time. We are just scaring you.

It was my wife Hiba that pushed for us to leave. She said, let’s go to Turkey, let’s go anywhere else but here. She told me to think about my daughter and the danger I was putting her in. I knew she was right. We first tried to cross into Turkey with a smuggler but when they demanded I give my daughter sedatives I refused. Later, a producer colleague helped my family get permission to cross into Turkey legally.

Syrians fleeing from clashes between the Islamic State of Iraq and Syria (ISIS) militants wait at the Turkish-Syrian border to cross into Turkey on Sept. 18, 2014.
Halil Fidan—Anadolu Agency/Getty Images

When we arrived here, I didn’t have a plan. For a few weeks, we stayed with my wife’s brother in Turkey’s southernmost province Hatay, which borders Syria. Then we moved to Gaziantep, a big city in southern Turkey where there are lots of humanitarian organizations and media offices. At first, things were okay. My brother sent me a new camera from Dubai and I picked up assignments with Al Jazeera. I shot photos for them when they did interviews in border areas like Gaziantep, Hatay, and Kilis. Gradually, I saved enough to buy my own camera bag, tripod, and lighting equipment.

I also started to work with Gate of Sun, a cultural endeavor that aims to create bonds between Turks and Syrians through filmmaking workshops. This year, my Iraqi friend Bahaa and I set up our own program along similar lines. It’s called Duzen, which means balance in Arabic. We teach students how to use simple tools like mobile phones to document their experiences and train them in editing and post-production techniques. We currently have 30 Syrian and Turkish students in Gaziantep and receive funding from the U.N.’s International Organization for Migration.

Back in 2014, when I came to Turkey for training, things were different. Turkey had granted millions of refugees temporary protection status and nobody seemed to have a problem with us. But over the past few years, the situation has deteriorated. There’s a lot more tension.

Last year the Turkish government started to crack down on Syrians living here illegally, sending them back to Syria. That set off a wave of hate speech and gave nationalists and racists a platform to abuse refugees. There were anti-Syrian riots in Istanbul. Refugees were beaten in the streets. Syrian-owned stores were vandalized.

It’s bad in Gaziantep too. A couple of weeks ago I was playing with my daughter and we were speaking in Arabic. An old man stopped us in the street and asked whether we were Syrian. When I told him yes, he started shouting at us and he spat on me. We can’t retaliate out of fear that the government will kick us out.

My wife and I started thinking about leaving Turkey last year. We have two daughters now and the eldest is almost ready to start school. If I send them to school in Turkey, they won’t learn Arabic or English. When they grow up they will say, “Dad, what are we doing here?” Then there’s the difficulty of finding stable work. As a freelancer, I sometimes have to borrow from friends to pay the rent. This month we were five days late and even though we have been renting our house for more than two years the landlord said we have to leave by the end of the month.

I was planning to apply for legal immigration to the Netherlands. Friends have told me there is no racism there and my family can get their papers quickly. I’ve contacted people at the Dutch Embassy, and friends have been trying to help. But we can’t wait much longer. At the end of February, when Turkey said it would no longer block refugees from leaving, I thought: this is our chance.

The war has been going on for nine years and the idea of moving again is difficult. Syria will always be home. I miss it and sometimes I think about whether one day we’ll be able to go back. Now we are going further away but I feel like there’s no other choice.

Some of my friends in Gaziantep are planning to leave tomorrow. I’ve been following the news and have heard stories about violence at the border. They tell me, “Mustafa, you have a family, don’t put them in danger.” They say they will go first and tell me if it’s safe. If there’s a way to get into Greece, we will just leave. I will not wait one minute longer here.

As told to Joseph Hincks. This interview has been edited and condensed for clarity. 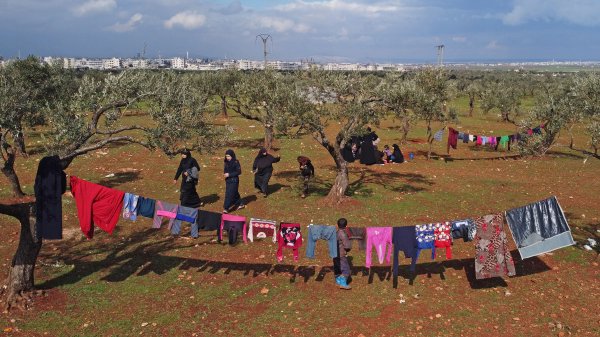 Syrian Refugees Have Nowhere Left to Hide
Next Up: Editor's Pick