Ideas
By Ayelet Gundar-Goshen
Gundar-Goshen is an author and a clinical psychologist, based in Tel Aviv. She is an award-winning screenwriter. Her latest novel is The Liar.

Hate won. Again. Benjamin Netanyahu, Israel’s longest-serving prime minister, who will face a trial for charges of bribery later this month, has managed to get a significant lead in his third electoral showdown. It’s not yet clear whether Netanyahu will be able to actually form a government. If he doesn’t, there’s a chance that the country will find itself facing a fourth round of elections. But even in this case, Netanyahu still won – with 36 or 35 seats, his Likud party is the biggest in the Israeli parliament. More Israelis voted for him this time compared to the previous two elections we had in 2019.

Even more troubling, Netanyahu’s victory over the judicial system is astounding. The majority of voters – according to current results – voted for a man set to go on trial in a few weeks. It’s as if voters didn’t care or do not trust the judiciary. Since Netanyahu is determined to evade justice, it seems like the country is facing a constitutional crisis of a new scale.

For more than a year, Israel has been in an intractable political deadlock. When the last election’s result were published in September, giving Netanyahu’s party only 32 seats, many of us were sure that this is the end of Bibi and his extreme-right government. Now, it is clear that the celebrations were too hasty. Like the coyote that always returns to chase the roadrunner, no matter how deep he fell just a moment ago, Netanyahu shows a remarkable ability to recover from any political and legal setbacks. Even in his own party, some said that one cannot be a prime-minister and sit on the accused bench at the same time. The third round of elections proved the opposite: Rumpelstiltskin turned hay into gold, and Netanyahu did even better, turning legal accusations into parliament seats.

What motivated so many Israelis to vote for a man accused of bribery? The answer is far deeper than Netanyahu himself. It has to do with the lack of trust among vast groups in Israeli society, who doubt the country’s justice system. If you ask someone in the streets of Jerusalem to picture a judge, you’re likely to get a description of a white, upper-class secular man – “a lefty”. Many voters of Netanyahu’s party share the opposite demographic profile. A map of voters who supported Netanyahu show most of them come from lower socioeconomic background, and keep Jewish traditions. They are not part of the hated “Ashkenazi elite.” They’ve experienced inequality. For them, the dice are indeed loaded. And so, when Netanyahu says that in his case the dice are loaded and claims the game was fixed–they believe him. Ironically, it was the decision to prosecute Netanyahu after so many years of investigation that convinced many people in the public that he was prosecuted due to his beliefs.

To understand Netanyahu’s remarkable achievement is to dive into the deep water of inequality, where hate between groups prevails all other arguments. I’m writing this from my table in a coffee house in Tel Aviv. Costumers walk inside sad faced, holding today’s papers, or surfing news-portals. Strangers tell each other “he did it again”. Tel Aviv is referred to sometime as “a state of its own”, and it’s easy to tell why. The numbers are clear: Tel Aviv and the surrounding suburbs voted central-left. Lower socio-economic cities such as Beer Sheba and Tiberius voted Bibi. Even more than they like Netanyahu, they hate the elite, those liberal left-wing attorneys and judges who went to top universities and grew up in rich families.

During his campaign, Netanyahu has called the prosecution against him “an attempted coup,” implying the justice legal system is infected with political interests. He calls it a witch hunt, but the real witch hunt is the one that the legal system is now undergoing, with Bibi’s followers sending death threats to state attorneys and other professionals who are part of the investigation. As the Prime Minister calls to “investigate the investigators,” the accusations against him are now viewed by some as an attack against the entire right wing political movement, while the left is allegedly using the justice system to try and win over the country. The accusations of bribery do not make those supporters doubt Netanyahu’s integrity. Instead, they doubt the integrity of the legal system. Nothing could be further from the truth – but the truth is no longer part of this election.

Right-wingers have already called for the Supreme Court to back off. They claim democracy means “majority rules,” and the majority wants to be ruled by Netanyahu. The legal system shouldn’t interfere with the people’s vote, they say. Many turn their back on the justice system “in the name of democracy”, and give Bibi an automatic “pardon” even before his trial began.

For those who still care about their candidate criminal record, Netanyahu’s campaigners created a perfect spin for the final election days, imported from the US: just shorty before the election, the media was washed with fake news flood about Gantz involvement in illegal business activities. All lies, but lies linger. If Gantz is just as corrupted at Bibi, some voters thought, we may as well stick to the devil we know.

After attacking the legal system, and spreading disinformation about his rival, Netanyahu launched in February a hate-campaign saying that Gantz “will sit with the Arab party.” The Arab minority is so delegitimized these days, that some actually found this to be a reason to shift their vote back to Bibi, even though Ganz was fast to promise that he won’t form a government without “a Jewish majority”. Netanyahu’s promise to annex Jewish settlements in Palestinian territories, with the alleged blessing of who he calls “my dear friend Trump” got him even more votes from the extreme right parties.

Perhaps the most memorable image of the March 2020 election will be that of voters with Coronavirus, who were directed to special polls, by people dressed like astronauts, to maintain complete isolation. History will tell us whether the infection we had to fear most was indeed the coronavirus, or another infection: Hate plague – to the justice system, to minorities, to democratic principles – that is spreading so fast and deep, and so dangerously. 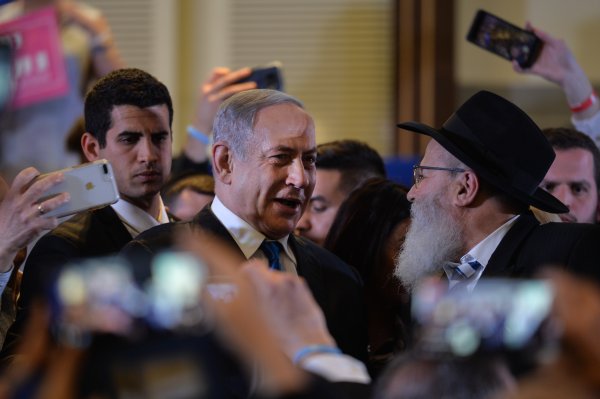 Can a Third Election Break Israel’s Political Deadlock?
Next Up: Editor's Pick