After performing in Detroit on Feb. 22, the renowned musician posted a photo of himself wearing a Barry Sanders jersey. Sanders is a retired Hall of Fame running back who played for the Detroit Lions.

Not all of his followers understood that the jersey was a reference to the football player and an homage to the city where Brooks performed. It appears that many thought it was an endorsement of Democratic presidential-hopeful Vermont Sen. Bernie Sanders. And many were not pleased.

“You just lost a fan. Can’t believe you’d ever support Sanders,” one commenter wrote. “So disappointing. Hey, Garth, why haven’t you shared your money with all of us?” reads another. Others in the comments were quick to point out that Brooks was referencing the football player, not the democratic socialist. The Instagram post has over 14,000 comments so far.

Brooks wore the jersey while playing at Ford Field, in front of a crowd of roughly 70,000 people. According to Michigan Live, during the concert he told the crowd that he wore the jersey not only because he was performing where the Lions play, but also because both he and Sanders went to Oklahoma State University.

“I was lucky enough to be an athlete and to wear the same uniform as this guy wore in college,” Brooks reportedly said during the concert. “I was lucky to go to school with him. You guys got the greatest player in NFL history in my opinion in this jersey. I love this man.”

Looks like news of the mix-up got back to Barry Sanders himself, who tweeted on Friday, “Hey @garthbrooks, want to be my VP? #Number20for2020″

Brooks responded, “Hey @BarrySanders I would run any race with you! #Number20for2020 HA!!! love you pal, g.” He hasn’t commented on the incident beyond the tweet.

However, the Detroit Lions decided to weigh in.

Brooks doesn’t usually make his personal politics public. In 2017, he said he would have performed at President Donald Trump’s inauguration had he not had a scheduling conflict.

“It’s always about serving. It’s what you do,” he said at the time. “Can’t thank the Obamas enough for serving this country, and may God hold Trump’s hand in the decisions that he makes in this country’s name as well,” he continued. 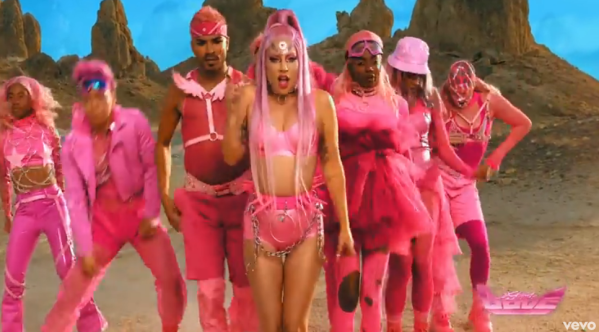 The 5 Biggest Music Videos of the Week, from Lady Gaga to BTS
Next Up: Editor's Pick