Monsta X Pushes Against Boundaries in ALL ABOUT LUV, K-Pop's First All-English Album in a Decade

The members of K-pop group Monsta X entered the interview room as though it were the set of a music video: fully hair-and-makeup-ready, some wearing clothes identical to the attire they wore in the video for one of their latest releases, “Middle of the Night.” Kihyun donned a checkered coat with bright yellow stripes and a green collar, Minhyuk a light brown coat with a dark tiger print. The group had just completed a Q&A on Facebook Live, after more than a week of non-stop interviews and meet-and-greets on both coasts of the U.S. The frenetic pace was par for the course for a K-pop act promoting a new album, though in this case, the group from South Korea had just released something a bit different: its first all-English album, ALL ABOUT LUV.

ALL ABOUT LUV is the first all-English album released by a K-pop group in more than a decade — the last one was from trio JYJ in 2010. The new album quickly accomplished an impressive feat, ranking fifth on the Billboard 200 albums chart, making Monsta X only the third K-pop group, after BTS and SuperM, to break the top 10. Members Shownu, Minhyuk, Kihyun, Hyungwon, Joohoney, I.M and Wonho — who left the group near the end of last year — participated in the recording of the album, whose 11 tracks are uncharacteristically sensual and seductive for a K-pop act. A few days after the release, five of the six members of Monsta X sat down with TIME to discuss, at times via a translator, ALL ABOUT LUV, and the experience of both singing in English and speaking more frankly about what happens in the bedroom. (Rapper Joohoney is on a break, taking time to focus on his mental health due to anxiety, but will return for the group’s North American tour beginning in June.)

In the nearly five years since the group was formed in the reality competition show No.Mercy in 2015, Monsta X has carved a space in K-pop with EDM- and hip hop-heavy tracks paired with aggressive choreography. In 2019, the act began to shift gears in its sound. While continuing to release Korean albums with the same explosive energy, Monsta X dropped a number of tracks recorded in English, with a sleeker, smoother vibe. The rollout of these English-language songs led up to the release of ALL ABOUT LUV, which dropped on Valentine’s Day to the warm embrace of “Monbebes” — the name for the group’s fans, derived from the French term for “my baby.”

A new language introduces a new mode of expression

The group began working on ALL ABOUT LUV back in 2018, when they recorded “Besides U” featuring Pitbull, though “Who Do U Love?,” a collaboration with French Montana, would be the album’s first single. “At that time it was really difficult to record,” Kihyun, the main vocalist whose honeyed falsetto is a standout in the new album, tells TIME of working in English. “But it’s really comfortable now, every song.” A combination of speaking more English during stateside events, covering American pop songs — such as Bruno Mars’ “Versace on the Floor,” performed on a Korean television show in 2018 — and receiving help from youngest member I.M, who has lived in Boston and is fluent, has gradually increased the artists’ comfort working in the language.

Releasing an English album doesn’t just mean the words sound different. Vocalist Minhyuk describes a more technical difference in singing the two languages, which can lead to increased expressiveness. “When you speak Korean, there are lots of words that if you pronounce that word, your mouth is closed and it’s not really that smooth — it can sound a bit intense,” he says. “But when you are speaking English words, it goes with the flow. Word and word connects.” Minhyuk says the more flexible pronunciation helps him “give more emotions” to the English words. This can be heard, for instance, as he tenderly delivers the line, “I only feel alive when I don’t feel safe” from the new track “Misbehave.”

A laid-back, gentler approach to choreography

The emotions expressed in the new album, and the dances that accompany the songs, also mark a change from those of Monsta X’s past tracks. The group’s Korean music is known for its intensity — the latest title tracks “Follow” and “Alligator” are EDM-infused anthems whose choreography features fast-paced stomps, kicks and punches. In contrast, the numbers on ALL ABOUT LUV, as the album’s name suggests, share a laid-back mood expressed by soft and fluid dance moves. The performance for the new song “Middle of the Night” is filled with hip swaying, finger snapping and caressing of the microphone stand.

“In ALL ABOUT LUV, the whole album vibe is very moody and chill,” says leader Shownu, who is also the main dancer and has participated heavily in the group’s choreography. “We just wanted to match the dance moves with the songs.” The members contributed to shaping the routines of the new tracks. Shownu points to “Middle of the Night”: at the line, “we’re kissing in the car underneath of the night,” the idols tilt their microphone stands sideways and lean down as if to kiss them.

‘Honest things happen on the bed’

But the sex appeal doesn’t only stem from the choreography. Throughout the album, lyrics making sexual references carry Monsta X into a beyond-PG-13, but not-quite-R-rated realm to which few K-pop acts have ventured.

In the track “Misbehave,” the chorus goes, “Love it when we mess this up, every time we argue, straight into the bedroom.” When asked about these lyrics, I.M says, “When you are loving somebody you need to be honest, and honest things happen on the bed.”

“What?!” Kihyun exclaims. “B-E-D? B-E-D?” Minhyuk asks, spelling out the word. “It’s about your imagination,” I.M responds, offering a laundry list of chaste activities. “We can just sleep, or just yawn…”

“Watch Netflix on bed,” vocalist Hyungwon, who has been mostly quiet up until now, chimes in. “Yeah, everyone has their own time on their bed,” I.M says. Kihyun fans himself. “Whew, I’m sweating!”

Minhyuk reflected on the lyrics of “Love U,” a cheery electro-pop track suggestive of something more physical. The members sing, “I really, really wanna love you / But I can’t say the word I want to / ‘Cause they won’t play it on the radio / But I know you know / What I mean, what I mean.” It’s not hard to guess the word the lyrics suggest.

“When we were recording ‘Love U,’ I thought it was just a song about love,” Minhyuk explains. “But it went in a different direction.”

To be clear, the lyrics in All ABOUT LUV never explicitly mention sex. But compared to previous tracks in Monsta X’s discography — and, on a broader scale, most love songs across K-pop — the words are significantly more sexual. “It’s fine, we’re all adults.” Kihyun says, “and this is an American album.” If it were a Korean album, there would “maybe” be fewer of these references, he says. “The Korean society is more strict to lyrics.”

While the majority of K-pop tracks have a balanced distribution between singing and rapping — as most idol groups are formed with a mix of singers and rappers — ALL ABOUT LUV has significantly fewer rap verses. I.M and the group’s main rapper Joohoney, who boast some of the most dynamic rap delivery in the industry, tabled that specialty to record vocal-heavy sections. “I think I forgot how to rap by now,” I.M jokes.

“It was so funny,” Kihyun shares about Joohoney’s time in the studio. “Joohoney yelled at me, ‘Hyung, help me! I can’t do this,’” Kihyun says, referencing the Korean term for “older brother.” “The notes were so high to Joohoney, but he did it.” Indeed, Joohoney and I.M displayed their versatility across the album’s melodies, from the ad-libs in “Who Do U Love?” to the sultry introduction in “Middle of the Night.” In blurring the rap-vocal divide, the group is pioneering a new sound for Korean groups releasing music in the U.S.

“The Korean fans liked it because they saw a feeling they had never seen,” Hyungwon says. “The American fans liked it because it was fully in English.” Music from the album is already making its way into spaces where K-pop is rarely heard. On a recent episode of Riverdale, “Who Do U Love?” plays in the background. Elsewhere, fans have recorded hearing ALL ABOUT LUV tracks in stores from an H&M in Turkey to a Hollister in the U.K. When the group announced its North American tour taking place this summer, it became clear that Monsta X is returning to cities in venues much larger than the ones they performed in just a year ago, a testament to their rapid growth.

A few days before the Billboard 200 list was announced, TIME asked Monsta X how they will measure the success of ALL ABOUT LUV. Leader Shownu says he does not want to “get stuck inside of ‘success,’” and his teammate Kihyun offers a simple but emphatic response: “If we and our fans are satisfied with this album, that is good.” 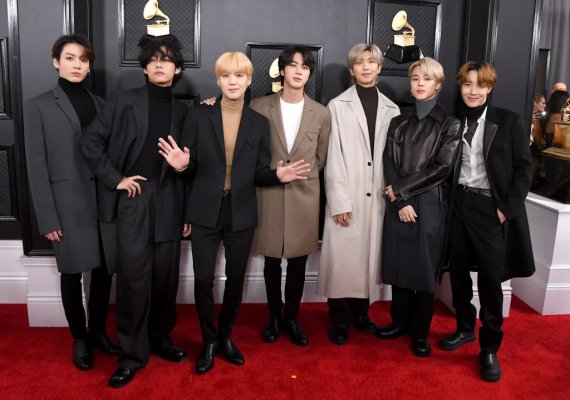 Breaking Down the Influences on BTS's 'Map of the Soul: 7'
Next Up: Editor's Pick