Meet SuperM, the K-Pop Supergroup That Skyrocketed to the Top of the Billboard Charts

A palette of hair colors — aquamarine, silver, shades of gold — popped against monochrome clothing as the seven members of SuperM filed into a backstage room at Madison Square Garden. In a matter of minutes, the group from South Korea would take the stage for the first time at one of the biggest venues in the biggest city in the U.S. Outside on this Tuesday evening in November, enthusiasm buzzed for the newly formed K-pop supergroup, comprised of artists considered to be some of the best performers in the industry. Within two months of their debut, they had already hit No. 1 on the Billboard 200 albums chart — the only K-pop act other than BTS to have topped the list — and attracted thousands at their shows from Forth Worth to Chicago.

The group’s ongoing North American tour, “We Are the Future,” began in November and continues through February, hitting 10 cities. In the moments before the group’s concert at the Garden, SuperM sat down with TIME to discuss, via a translator, their experience since the group’s launch in October.

“I feel like how we’re assembled itself is a very futuristic step that K-pop hasn’t ever seen before,” says Mark, the rapper from Canada and youngest member of SuperM. “Who knows what kind of road this may pave, but we just wanted to show how we can bring different elements together in one — and have that be expressed onstage in a powerful way.”

Assembling the “Avengers of K-pop”

Last summer, SM Entertainment, one of South Korea’s largest entertainment companies, and Capitol Records joined forces to announce the formation of what they referred to as “the Avengers of K-pop,” a group named SuperM. The act would feature members from SM’s boy groups SHINee, EXO, NCT 127 and WayV — each of which boasts a legion of fans that have powered them to the top of Asia’s music scene. “We keep describing them as ‘Avengers’ because I think that’s the best conceptual analogy that will immediately be understood by others,” SM’s A&R executive Chris Lee told Billboard at the time of the group’s launch. “Each Avenger has their own group and Iron Man has his own movie and Thor has his own but together they have an even greater synergy.”

The founder of SM, Lee Soo-man, selected the seven members himself. Taemin is a seasoned artist who debuted in his original group, SHINee, 11 years ago at the age of 14. Baekhyun and Kai hail from EXO — the first, a vocalist with an extensive range and a warm falsetto, and the second, an idol with tantalizing dance moves and even more tantalizing facial expressions. NCT 127’s leader Taeyong is joined by groupmate Mark, both of whom are powerhouse rappers with a knack for performing complex choreography. The lineup also includes two members from Chinese group WayV: Ten, the quadrilingual Thai artist with a honeyed tone, and Lucas, the deep-voiced rapper born in Hong Kong.

The seven artists hold one or more of the positions of “main dancer,” “main vocalist” or “main rapper” — terms used in K-pop to signal members with a central role in their respective specialties. As one team, they bring not only a vast armory of technical skills but distinctly charismatic personas honed through years of performing onstage — a major advantage for a “rookie” group.

Landing a No. 1 Album

The merging of fanbases played a substantial role in driving SuperM: The 1st Mini Album to the top of the Billboard 200. “All of us come from different teams that are already established and we already have our own careers, but us coming together on this album created this new synergy that was that much more attractive to not only our fans but also fans outside of our regular fanbases,” group leader Baekhyun explains. “They all came together in support of this album.”

The initial announcement of SuperM’s formation drew mixed reactions — some fans of individual acts expressed concern that this new project would lead to fewer resources dedicated to the existing groups. But those concerns were soon dwarfed by the significant wave of K-pop listeners across the fandoms of SHINee, EXO, NCT 127 and WayV whose enthusiasm was on display as they attended the tour and purchased the album in droves.

SM and Capitol released eight versions of the EP — one with each artist on the cover, plus one with the group — a packaging strategy often used in K-pop to incentivize album collection in the era of streaming. Besides the EP, a collection of merchandise was designed, each item with seven individualized versions. Each of the products was bundled with a digital album which fans could redeem, a move that would contribute to album sales counted toward Billboard charts. In total, more than 60 SuperM merchandise and album bundles were available. Bundling is nothing new in the American music scene — artists from Taylor Swift to Kanye West have taken the approach in past releases. But the high number of SuperM products that were offered was unusual, reflecting the marketing savvy of labels intent on getting their artists to the top.

Growing as Artists Through ‘We Are the Future’ Tour

The “We Are the Future” concert is a testament to SuperM’s ability to deliver cohesive performances as a new team, while holding their own as individual players. “In addition to our group stages as SuperM, we also showcase our solo stages,” says Baekhyun. “That’s when each member’s distinct music styles and performance aspects shine.” Later in the evening, for the group leader’s individual stage, he sang the groovy tracks “UN Village” and “Betcha” from his solo album. A smooth flick of the jacket and snapping of the fingers every few measures accentuated the vocalist’s relaxed gait, as Baekhyun found the groove in the rhythms of the R&B melodies.

“When I watch him sing and how he vocalizes, his breathing patterns — I feel like I’m taking a vocal lesson,” says Taemin of his bandmate. Mark nods enthusiastically. “Vocal instructor,” he chimes in, gesturing toward Baekhyun with his arm as the singer timidly mouths “thank you.” But it’s not just the SuperM leader’s individual performance that offers instructional value. As the seven artists prepared for the “We Are the Future” concert, a teacher-student relationship was layered onto their brotherhood.

“Me, Taemin hyung and everyone here have different styles of dancing and how we represent ourselves on stage, so when I look at them on stage, I get the tips and tricks,” Ten says, referring to Taemin with the term for “older brother” in Korean. SuperM includes some of the dancers widely acknowledged to be the best in K-pop, but each has a distinct way of executing choreography and freestyling, as displayed through their individual performances. Ten, in a mostly white ensemble, elegantly spun and glided onto the floor while dancing to his songs “Dream in a Dream” and “New Heroes.” Meanwhile, Taemin, dressed in all black with a mesh button-down shirt , sharply hit and twisted his body to the electronic beats of “Danger” and “Goodbye.” Kai, another highly skilled dancer, delivered a combination of soft body rolls and hard pops as animated flames lit up in the backdrop during the rapper-vocalist’s hip-hop solo “Confession.”

“I’ve learned a variety of traits from them and I combine them to create new techniques,” Lucas says, in Chinese, of the group’s senior members. For his solo performance, the Hong-Kong born artist confidently swayed to the drumbeats of the whimsical track “Bass Go Boom.” Although his speciality is rap, Lucas is simultaneously sharpening his vocal skills. “Baekhyun hyung sometimes teaches me to sing,” he says. Mark, grinning from ear to ear as he watched Lucas communicate in Chinese, jumps in and repeats “chang ge!” the Chinese word for “sing.”

On stage, Mark shed his youthful energy in favor of a more mature persona as he performed his solo rap “Talk About.” With whoops and claps, the rapper engaged the crowd and displayed the poise of someone who, at just 20 years old, has spent years making the stage his home. The other main rapper, Taeyong, exhibited his captivating stage presence in the track “GTA.” Wearing a glittery mask for the first segment, Taeyong showcased his ability to pack drama in his rap with vocal intonations and body movements alone.

Their Future as a Supergroup

In the months between the two legs of the tour, the seven members traveled globally for activities outside of SuperM. Baekhyun and Kai returned to Seoul for the release of their group EXO’s new album. Taeyong and Mark left New York after the November concert, only to fly back the next week to perform in Macy’s Thanksgiving Day Parade as NCT 127. Ten and Lucas visited cities from Bangkok, Thailand to Shenzhen, China for WayV’s “fan meetings.” Taemin, whose SHINee bandmates are in the military, is working on a solo album scheduled to drop in March.

On Jan. 30, the artists will come together once again as SuperM and tour cities from San Diego to Vancouver. All eyes, no doubt, will remain on the act as it strives to become a major player in the music scene beyond South Korea. 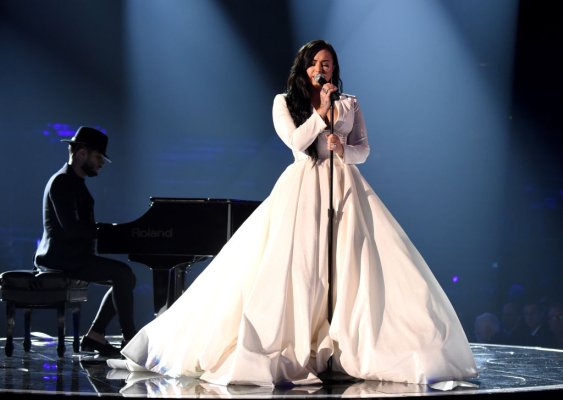 Demi Lovato Debuted a Raw New Song In Her Grammys Return
Next Up: Editor's Pick