President Donald Trump knows that presidents are ruthlessly judged for fumbling a crisis. President George W. Bush was widely ridiculed for saying “Brownie, you’re doing a heck of a job,” to Michael Brown who headed the bungled response to Hurricane Katrina. Trump himself called the botched 2013 rollout of the enrollment website for President Obama’s Affordable Care Act a “total disaster.” In 2014, he said President Obama should be “ashamed” for not blocking flights from Africa during an Ebola outbreak.

As Trump left India to return to Washington earlier this week, the President was furious at seeing the markets tank in response to the spread of the coronavirus — and the warning by his own Centers for Disease Control that Americans should brace themselves.

So on Wednesday, Trump decided to get ahead of the story, calling a rare primetime press conference in the White House Briefing Room. His staff scrambled to put it together. “He was pissed over in India” and felt like his administration was “getting killed” in the press and by the markets about its handling of the coronavirus, says a White House official.

In the hour before Trump walked out to meet the press, he told public health staff he would announce that he was putting Vice President Mike Pence in charge of the coronavirus response, calling on Pence’s experience as the governor of Indiana handling the response to health crises in that state. “It was a game time decision,” the official said.

And during the 57-minute press conference, the President downplayed the risk the virus poses, contradicting his own public health officials. “The risk to the American people remains very low,” Trump said. “We have the greatest experts, really in the world, right here. We’re ready to adapt and we’re ready to do whatever we have to as the disease spreads — if it spreads.”

The decision to appoint Pence and the impromptu briefing seemed to be an acknowledgement by Trump that the threat of the coronavirus poses a critical challenge to his presidency. It comes as he is seeking re-election and has been flexing his power, emboldened at having survived impeachment and the Special Counsel Robert Mueller investigation. His approval ratings — while still averaging below 50% — have ticked up slightly. He’s launched a purge of career officials he believes are disloyal to him. He’s called for two Supreme Court justices to recuse themselves from cases involving him, and publicly pressured the Justice Department to ease up on prosecuting his friend Roger Stone and slammed the federal judge handling the case.

A serious outbreak of coronavirus in the United States would not only derail that momentum, it would put him under unprecedented scrutiny. The series of erratic moves he has made not only challenge long-standing democratic norms, they could be dangerous at a time when the public, facing an emerging public health crisis, is looking for a steady hand in the White House, says Julian Zelizer, a historian at Princeton University. “This is one of those moments where the chaos from the administration and the disinformation has real consequences,” Zelizer said. “It matters that the public trusts what the president says.”

Trump knows the stakes are high, which is why he was walking a narrow line during the Wednesday briefing between offering the concrete action of appointing Pence and trying to tamp down the alarm he felt the CDC had unnecessarily whipped up by urging schools, hospitals and state and local officials to prepare for the coronavirus. He continued to express optimism that the virus could be contained and won’t infect many more people inside the U.S.

That is not a view shared by Dr. Anne Schuchat, the principal deputy director of the Centers for Disease Control (CDC), who joined him in the briefing room. When Trump restricted travel to the U.S. by non-citizens who had recently visited China, limited flights and called for quarantining Americans who had recently traveled Wuhan Province, the epicenter of the virus, the administration managed to delay, but not stop, the spread of coronavirus inside the U.S., Schuchat said.

“Our aggressive containment strategy here in the United States has been working and is responsible for the low levels of cases that we have so far. However, we do expect more cases,” Schuchat told reporters during the briefing.

Within an hour of President Trump ending the press conference, the Centers for Disease Control announced that a new case of coronavirus had been confirmed in northern California, bringing the total number of known cases in the U.S. to 60. Officials don’t know how the person in California contracted the virus. “At this time, the patient’s exposure is unknown,” the CDC wrote in a statement. “It’s possible this could be an instance of community spread of COVID-19, which would be the first time this has happened in the United States. Community spread means spread of an illness for which the source of infection is unknown.”

That leaves Trump in an uncomfortable spot. Pence will lead his first coronavirus task force meeting at Health and Human Services headquarters on Thursday, says a senior administration official. White House officials are considering bringing Dr. Deborah L. Birx, who has been the U.S. global AIDS coordinator and U.S. special representative for global health diplomacy at the State Department since 2014, into the National Security Council to help coordinate the response. But as more cases mount, Trump will have to come to terms with the fact that it’s his crisis now, and he’ll own the outcome. 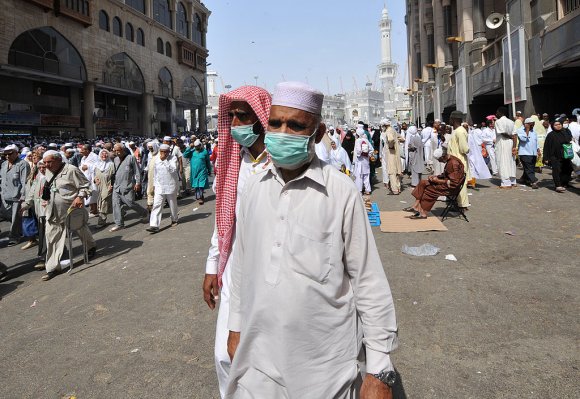