When Indian Prime Minister Narendra Modi visited the U.S. last year, he was greeted by a massive crowd at a Texas rally, billed as one of the biggest-ever receptions for a foreign leader. India is now preparing to return the favor ahead of President Donald Trump’s first official visit to the country on Feb. 24 and 25.

About 100,000 people are expected to attend the “Namaste Trump” event planned in the Indian city of Ahmedabad in Modi’s home state of Gujarat. Modi and Trump will also lead a parade through the city on Trump’s two-day trip, which is expected to focus on trade relations between the two countries and their shared concern about China’s growing influence in the region.

This won’t be the first time massive crowds have turned out in India to receive a visiting U.S. leader. President Bill Clinton also received a large, cheering reception during his trip to India in 2000. But not every U.S. president has been received so warmly, and the history of official visits tracks the ups and downs in the relationship between the world’s two largest democracies over the last 70 years.

Trump’s state visit also comes at a difficult time for Modi. Anti-government protests against a controversial citizenship law have engulfed the country since December. India’s move to revoke Kashmir’s autonomy in August also drew sharp criticism from many in the international community, including members of the U.S. Congress. But experts believe Trump is not likely to raise these issues during his trip, much to the Indian government’s relief.

“There is a lot of pressure on India over its socially divisive policy moves,” Richard M. Rossow, senior adviser at the Center for Strategic and International Studies in Washington, tells TIME. “A presidential visit is a sign that the U.S. will continue developing the relationship despite these issues.”

Ahead of Trump’s trip to the South Asian nation, here is a look at previous U.S. presidential visits to India.

The first state visit by a U.S. president to independent India came in the throes of the Cold War, in which India decided to remain neutral. India’s presence at the head of the Non-Aligned Movement, which committed the country not to take sides between the U.S. and the Soviet Union, had kept the two countries estranged until then.

During his trip, Eisenhower addressed both houses of the Indian Parliament and visited the Taj Mahal with Prime Minister Jawaharlal Nehru. The trip marked a significant shift in the perspective of many in Washington, who had thought of India as being close to the communist Soviet Union.

U.S. President Richard Nixon waves to crowds as he rides in open car with the acting president of India, Mohammad Hidyatullah, in motorcade from airport on July 31, 1969.
Bettmann Archive/Getty Images

Nixon’s one-day trip to India was primarily aimed at de-escalating tensions with Prime Minister Indira Gandhi. The two leaders had a frosty relationship because of India’s decision not to take sides in the Cold War and and the U.S. decision in the early 1960s to deepen its partnership with India’s archrival, Pakistan.

Two years later, the relationship soured further when Nixon supported Pakistan in the India-Pakistan War of 1971, which led to the creation of Bangladesh. In the run-up to the war, India had signed a treaty with the Soviet Union shifting from its original position of Cold War neutrality.

When Carter visited India, the intention was to thaw tensions that remained after the 1971 war and India’s first nuclear test in 1974. He addressed the Indian Parliament and left a lasting impact on a small town near New Delhi, which was later renamed Carterpuri after him.

However the trip couldn’t convince Prime Minister Morarji Desai to give up India’s nuclear ambitions, a move that irritated the Americans.

Clinton’s India trip, the first by a U.S. President for more than 20 years, was a landmark one that came after a prolonged lull in the relations between the two countries. Following the disintegration of the Soviet Union in 1991, alliances had shifted. During the 1999 war between Pakistan and India, the U.S. under Clinton sided with India, the first time the country had supported India against Pakistan. In 1991, India initiated a policy of economic liberalization that opened doors to foreign investment. This was also a major boost to trade relations between the U.S. and India.

Clinton visited with his daughter, Chelsea Clinton. His speech in the Indian Parliament received rapturous applause and he toured several Indian cities, leaving many in the country star-struck. “President Clinton was wildly popular in India,” said Bruce Riedel, a senior adviser at Brookings Institute who helped organize Clinton’s trip to India. “It was like traveling with the Beatles or the Rolling Stones in the 1960s.”

The highlight of George W. Bush’s trip was the finalization of a landmark nuclear deal, which was agreed upon in 2005. Under the agreement, India separated its civil and military nuclear programs and opened its civilian facilities including nuclear power plants for international inspection. In return, the U.S. ended a ban on nuclear trade with India. The significant move was also accompanied by other measures that boosted economic and security ties.

In an administration defined by the post-9/11 war on terrorism and the invasion of Iraq, experts think developing relations with India was one of Bush’s significant foreign affairs achievements. Ahead of his trip to India, TIME had described his relationship with the country as “something of a bright spot.”

“He definitely deserves credit for recognizing India as a security partner,” Riedel says. “He walked a fine line that allowed for the development of stronger relations with India as well as with Pakistan.”

Obama visited India twice. During his first trip in 2010 during the administration of Prime Minister Manmohan Singh, he backed India’s bid for a permanent seat in the United Nations Security Council. In addition to $10 billion in trade deals, the two leaders also agreed to boost defense and national security ties, which led to the easing of export regulations on high-technology goods to India.

The second time around, Obama came to India on Prime Minister Narendra Modi’s invitation to be the chief guest at the country’s Republic Day celebration, which marks India’s constitution going into effect. The trip went smoothly until Obama made comments on religious freedom in the country, saying “India will succeed so long as it is not splintered along the lines of religious faith.” On his return to Washington, he cited concern about “acts of intolerance” on religious lines in India. His comments didn’t go down so well with some members of Modi’s Hindu nationalist government and triggered backlash in the national media. 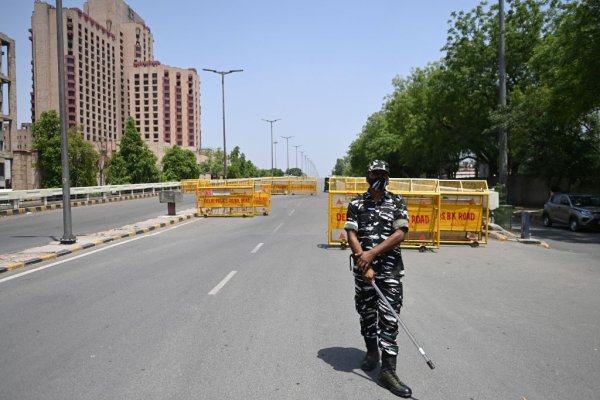 Indian Government Faces Calls for a National Lockdown
Next Up: Editor's Pick