The Graphics Interchange Format, or GIF, was first developed by computer scientist working at CompuServe back in 1987.

And while it has swelled or dipped, the debate over how to pronounce the acronym for those minute looping animations became a thing once the GIF really took off. Is it a hard g like in graphics? Or a soft g like giant? Answering that question depends who you ask and whose authority on the matter you believe in.

Here is a timeline of how to pronounce GIF, one of the great debates of the internet age.

Steve Wilhite releases the Graphics Interchange Format, or GIF, while working for Compuserve. He called it a GIF with a soft g. “Choosy developers,“ he reportedly said, “choose JIF.” This was of course a play on the peanut butter brand Jif’s line “choosy mothers choose Jif.”

The pronunciation debate was apparently already in progress. Australia’s ABC reports that “[i]n 1994, the author of an encyclopedia of image formats said ‘most people’ seem to prefer saying a different way than the GIF godfather instructed: GIF.

GIF is selected as the Oxford Dictionaries USA Word of the Year 2012. The dictionary wrote that “GIF may be pronounced with either a soft g (as in giant) or a hard g (as in graphic).

The White House announces its new Tumblr page where, according to New York magazine, it threw down the pronunciation gauntlet with an illustration that told visitors to the page that they can expect “ANIMATED GIFs (‘HARD G’).” This was the same year that we got GIPHY, a GIF database people could search for the GIFs they wanted.

Wilhite receives a Lifetime Achievement Award at the Webby Awards and used his platform to make his declaration. “It’s pronounced JIF, not GIF.” Just like the peanut butter. “The Oxford English Dictionary accepts both pronunciations,” Wilhite told The New York Times. “They are wrong. It is a soft ‘G,’ pronounced ‘jif.’ End of story.” But it’s not so simple.

Many people on the internet disagree with Wilhite. Gizmodo declared him “wrong” and Twitter filled with people expressing their disagreement. “Pffffffffffffff,” posted one; “Graphics Interchange Format. Graphics. Not Jraphics. #GIF #hardg,” tweeted another.

President Barack Obama chooses a side, announcing his “official position” is that it is pronounced GIF with a hard g like grape.

A survey of more than 1,000 Americans were asked whether they “pronounce GIF as ‘jiff’ or ’gift‘” and “‘gift’ handily beat ‘jiff,‘ nearly 54% to 41%.” It was conduced by eBay Deals and a digital marketing agency.

Designer Aaron Bazinet launches website, howtoreallypronouncegif.com, arguing for the hard g pronunciation. “It’s the most natural, logical way to pronounce it. That’s why when everyone comes across the word for the first time, they use a hard G.”

Mental Floss wades into the debate with the help of a linguistics professor for a comprehensive analysis, ultimately deciding that both sides are correct and that the g in GIF “really can go either way.”

Newsweek declares it GIF with a hard G and has a linguistics professor to back them up.

Online GIF site GIPHY teamed up with Jif peanut butter to have some fun with the debate. The two companies unveiled a limited-edition jar of peanut butter in Jif’s trademark packaging, but labeled “Gif”. While some may think the packaging implies that GIF and Jif rhyme, according to the two companies—and a series of accompanying GIFs on GIPHY—the opposite is true.

“At Giphy, we know there’s only one ‘Jif’ and it’s peanut butter,” Alex Chung, founder and CEO of Giphy said in a press release about the campaign. “If you’re a soft G, please visit Jif.com. If you’re a hard G, thank you, we know you’re right.” That’s right: according to Giphy, GIF is pronounced with a hard G, unlike Jif the peanut butter.

Is that the end of it? Probably not. 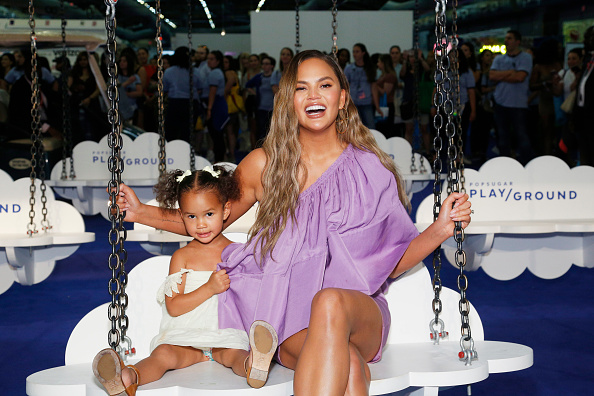 Chrissy Teigen Has a Relatable Method to Getting Her Daughter Luna to Pose for Photos
Next Up: Editor's Pick