Jif peanut butter has waded into one of the most fervent debates of our modern time: the right way to pronounce GIF. The battle has raged for some time now between those with strong feelings as to the hard — or soft — pronunciation of that big “G,” but nothing settles folks down like a classic snack food, right?

For what it’s worth, which is everything at this point, Steve Wilhite, who invented the GIF file back in 1987, told the New York Times that it’s definitely pronounced softly, as in “jif.” What’s more, he even based the name of the file on this very company’s staple of American cuisine. That’s right. It’s technically “Jif,” just like the peanut butter. Not everyone agrees with the godfather.

Of course, GIFs, an acronym for graphics (hard G) interchange format, are those fun animated images that are now inseparable from internet life. Spreadable like peanut butter, the expressive shorthand is one of the most joyful aspects of internet culture. So how exactly to pronounce GIF has been up for a rather silly debate that goes way back for internet obsessives. As far as debates go, this is an old, well, debatable one.

READ MORE: Here’s a Timeline of the Debate About How to Pronounce GIF

Even the White House was not above saying its piece on Tumblr when the debacle reached its fever pitch in the spring of 2013. (The administration was firmly in the “hard G” camp.)

And as to be expected, Jif was there with a marketing stunt back then.

And because anything goes when it comes to the Internet, it should come as no surprise that Jif’s parent company J.M. Smucker Company has teamed up with the GIF destination Giphy.com to label some extra special (and extra confusing) limited jars of Jif peanut butter with a “Gif” label.

“We’re teaming up with Giphy to put a lid on this decade-long debate and provide there is only one Jif,” the company’s vice president of marketing, Rebecca Scheidler, wrote in a press release. “Jif is peanut butter, GIFs are animations!”

We report, you decide. 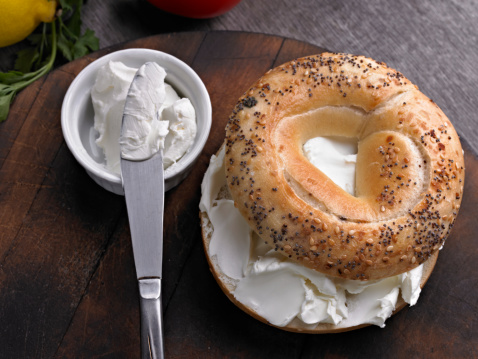 The Inside Scoop Behind This Viral 'McMonstrosity' Bagel Overflowing With 'Extra Cream Cheese'
Next Up: Editor's Pick