'We Are Kinder Than Them.' Trump and Modi Don't Reflect the Spirit of Gujarat

President Donald Trump is due to make the first ever visit by an American head of state to Ahmedabad, the biggest city in the western state of Gujarat. It is the state that Narendra Modi, now Prime Minister, ruled for 12 years. It’s also where where generations of my family have lived. A big reason that Trump chose Ahmedabad is that the largest number of Indians in the U.S. – and the most fervent supporters of Modi – are Gujaratis. Trump is hoping that, by showing up in Ahmedabad to declare his everlasting love for Modi, American Gujaratis like me will be persuaded to vote for him and donate to his campaign.

The leaders of the country of my birth, and the country of my citizenship (the U.S.), do seem to have this in common: they have both said and done hateful things towards Muslims. I first became aware of this when in 2015 Trump tweeted lies about Muslims cheering the fall of the Twin Towers. I was certain of it when, as President, I saw his retweets of a British far right hate group, itself retweeting three inflammatory (and untrue) videos titled “Islamist mob pushes teenage boy off roof and beats him to death”; “Muslim migrant beats up Dutch boy on crutches”; and “Muslim destroys a statue of Virgin Mary.”

In 2002, Ahmedabad was the site of anti-Muslim pogroms in which some two thousand people were murdered. Children saw their fathers set on fire and their mothers raped. Modi, who was chief minister of the state at the time, held back security forces who could have stopped the rioting, and members of his government actively participated in the killings. It made me ashamed to be Gujarati.

As soon as he assumed office, Trump banned citizens of several Muslim countries from entering the U.S. Modi’s government recently passed a law granting expedited citizenship to refugees from neighboring countries who belong to any major religion — except Islam. This was the first time in independent India’s history that a religion has been specifically targeted in an act of Parliament. And it is to be followed by a registry with the likely eventual goal of a nationwide system of gulags for people who can’t prove their citizenship, also aimed at Muslims. These initiatives have been overseen by another Gujarati named Amit Shah, Modi’s home minister, who has referred to Bangladeshi migrants as “termites.”

I want to tell the world: please don’t judge all fifty million Gujaratis by their actions. These people do not represent me, or millions of other Gujaratis. We are kinder than them, we are more open to the rest of the world than them. Gujaratis are global citizens par excellence. One out of every three overseas Indians is Gujarati; we can be found in 129 of the 190 nations of the earth.

But it’s true that the home of my grandparents has had, in recent times, a bloody history. My grandfather’s house in Ahmedabad was right next to a Muslim neighborhood. In peaceful times the Muslims shopped in the Hindu-owned markets; the Hindus went to Muslim tailors. During riots, which happened every few years or so, the border suddenly became visible, tangible. You were not to step across this line; there were always the boys standing guard, armed with hockey sticks, knives, kerosene.

It is a family fight, among Gujaratis. Most of my relatives adore Modi, and think he has restored Hindu and Gujarati pride after centuries of Muslim rule. But many children of Gujarati immigrants in the U.S. and the U.K. want nothing to do with this politics of hate. They identify as South Asian, or desi, rather than Indian. They don’t understand how their parents could oppose Donald Trump – 87% of Indian-Americans voted Democratic in the 2016 election – and also support Modi. They don’t understand how we can demand tolerance for Indian immigrants abroad while being intolerant to Bangladeshi immigrants at home. India has done what Trump dreams about: it has built a 2,000 mile-long wall on the border with Bangladesh, to keep out immigrants.

In honor of the American president’s visit, the Gujarat government hastily constructed a brand-new wall along the route of Trump’s motorcade, to shield his sensitive eyes from the slum on the other side. He’s going directly from the airport to a rally in the world’s largest cricket stadium, then a quick visit to Mahatma Gandhi’s ashram by this least Gandhian of Presidents, and then a dash back to the airport. The government is spending a reported $12 million for the three hours that Trump is to visit the city.

May I propose an alternative itinerary for the visit? Trump could take a look at some of the most exquisite medieval Islamic architecture in the world, such as the intricate carvings of Sidi Sayed’s mosque, or the ‘shaking minarets’ of Sidi Bashir. In 2017, Ahmedabad became India’s first city to acquire World Heritage status, for the 15th century Walled City built by Sultan Ahmad Shah. “The presence of institutions belonging to many religions (Hinduism, Islam, Buddhism, Jainism, Christianity, Zoroastrianism, Judaism) makes the historic urban structure of Ahmadabad an exceptional and unique example of multicultural coexistence,” reads the UNESCO citation.

Until recently, this coexistence was a feature of much of Gujarat’s history, which had to rely on an openness to other cultures, religions, if nothing else than for purely mercantile reasons. In order to be a good businessman, in order to have the widest possible market, you have to trade with many people who may be very different from you. You have to put aside your hatreds, and you have to be pragmatic.

Trump is also going to India to haggle with the government over trade; he has imposed punitive tariffs on Indian goods. Gujaratis are supposed to be famous for their business acumen, but Modi has failed in the first duty of a Gujarati businessman: to make a profit. India now has the slowest growth of all the emerging economies, at 4.8% and falling, and the unemployment rate is the highest in 45 years. Modi promised to build millions of toilets, but it’s the economy that he’s dragging into the toilet.

To divert attention from its failures, the government is encouraging its citizens to focus on Pakistan, hating Muslims, keeping an imaginary Bangladeshi horde out. It’s the politics of mass diversion. Trump does it with Mexicans; the Brexiteers do it with Eastern Europeans; Modi and Shah do it with Bangladeshis.

Any real Gujarati would be concerned about the incalculable harm these nativist, Islamophobic policies are having on the country’s international image, and its business prospects. Indian-born Satya Nadella, Microsoft’s CEO, recently took on on the citizenship act directly: “I think what is happening is sad… It’s just bad. I would love to see a Bangladeshi immigrant who comes to India and creates the next unicorn in India or becomes the next CEO of Infosys.”

Many countries and companies like to trade with India because it has a better reputation than, say, China. It is an open society; it does not have a state religion and the army stays largely out of politics. But if that image changes – if you suspend autonomy for a state like Kashmir and flood it with Hindus; if you yank someone’s overseas citizenship because of what he writes, like my friend Aatish Taseer; if you use the tax authorities to browbeat media houses into submission; if you use the machinery of the state to beat up students protesting anti-Muslim measures in their dorms – than it becomes just another dismal autocracy. Then Indian companies will be the targets of boycotts in the West, and foreign investment, already low, will continue to avoid India.

Whether Indians like it or not, much of the world now thinks of India in the same league as other corrupt and repressive regimes such as Brazil – whose President, Jair Bolsonaro, was the chief guest at the India’s Republic Day parade – and Turkey. India has lost its good name as a liberal democracy. This is going to cost the country money.

Gujaratis are, above all, a pragmatic people. It is pragmatic to make accommodation with everyone, even those who you perceive as your enemies. Today, India is the world’s second largest Muslim country; by 2060 it will be the biggest. The Muslim population will go from 15% to 20% of the country, and nothing short of an outright genocide is going to change that. On the whole, Indian Muslims have not been radicalized, and the Muslim women of Shaheen Bagh in Delhi wave the tricolor even as they protest government policy. Muslims voted with their feet to stay in the country after Partition. But if Indian Muslims are constantly otherized, if they are told over and over again: you don’t belong here, you are not truly Indian, then some segment of them is sure to become radicalized. And that could lead to the mother of all civil wars, something that will make Partition look like a schoolyard brawl.

Indians can’t afford not to work together, or be diverted by fighting each other. Because the next few decades are going to be challenging, even apocalyptic. Take just one issue: water. By 2030, it is estimated 40% of Indians will have no drinking water, and demand for water will be twice the available supply. I saw this every time I went back to Gujarat as a child. My grand-aunt could recite the names of the five rivers that flowed through her part of Gujarat. All of them are dry now, or mere trickles in the monsoon. Dhoodiyu desh, they call it, “the dust country.” We have to fight all these problems together, Hindu, Muslim, and all the other religions. United, we survive; divided, we die of thirst.

The first thing you are offered when you enter a Gujarati home is a glass of water. Every Gujarati home I have gone to has been welcoming. A visitor will be given water, shade, rest, and an invitation: come eat with us. When you part from a Gujarati, he will not say, “Goodbye.” He will say, “Aavjo”: “Come again.” That is the true spirit of Gujarat. We do not erect doors, fences, walls, detention camps. We wander the earth, and welcome the wanderer. 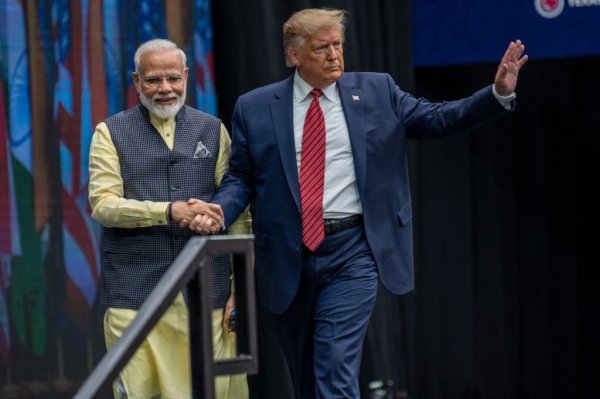 Here's the History of U.S. Presidential Visits to India
Next Up: Editor's Pick