(Bloomberg) — As President Donald Trump’s motorcade makes its way from the airport in the Indian city of Ahmedabad next week anticipating millions of cheering Indians waiting to greet him at a sprawling cricket stadium, there’ll be a few thousand locals hidden from view.

The city’s municipal corporation has built a four-foot-high wall to hide a stretch of slums on the American leader’s route. Trump and India’s Prime Minister Narendra Modi are expected to inaugurate and share the stage at Ahmedabad’s Motera cricket stadium at a public reception being touted as “Namaste Trump” on Feb. 24.

Trump told reporters on Tuesday he expects some seven million people at the stadium and lining the streets to greet him at the start of his two-day trip. According to census data, which is nearly a decade old, the city’s population was 5.5 million though more recent estimates put it at over seven million.

The event follows Modi’s trip to the U.S. in September during which he walked hand-in-hand with the U.S. president at a rock-concert like affair at a Houston football stadium. The “Howdy Modi” extravaganza was seen as an endorsement of Trump in front of more than 50,000 Indian Americans — an influential voter base.

The wall in Ahmedabad, the largest city in Modi’s home state of Gujarat, has been the subject of some ridicule in the Indian press and on social media. The municipal corporation, however, said on Wednesday the decision to build the wall was taken well ahead of Trump’s visit. “The decision to build a four-feet wall was taken two months ago to prevent encroachments on footpath & road,” Municipal Commissioner Vijay Nehra said on Twitter. On Sunday, Nehra tweeted that more than 100,000 people had already registered for the 22 kilometer (13.6 mile) roadshow by the two leaders that’s being called the “#theBiggestRoadShowEver.”

The Motera stadium can seat some 100,000 and is said to be the world’s largest cricket stadium.

The extravaganza comes during an election year for Trump and as Modi grapples with a sputtering economy and growing social unrest against his government’s aggressive push of new policies seen by many as discriminating against Muslims. 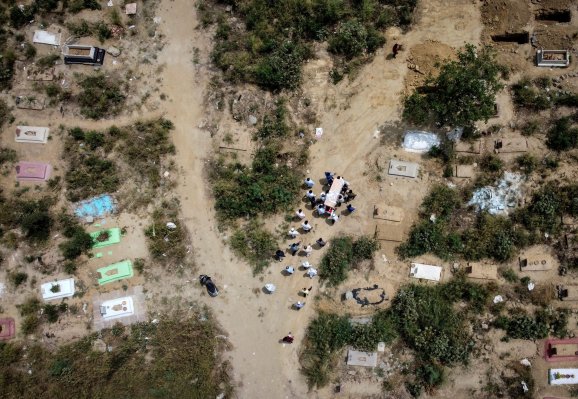