Xenophobia 'Is A Pre-Existing Condition.' How Harmful Stereotypes and Racism are Spreading Around the Coronavirus

A Chinese woman wears a mask as she stands near the light of a police vehicle on regular duty at Beijing Railway station before the annual Spring Festival on January 21, 2020 in Beijing, China.
Kevin Frayer—Getty Images
By Jasmine Aguilera

As 10-year-old Connor and a friend played one recent day at recess in Georgetown, Ontario, they were approached by a group of boys wanting to play a game — testing the boys for coronavirus.

Connor, who is half-Chinese, and his friend, also Chinese, played along at first, but Connor’s mother Nadia Alam tells TIME that they quickly became uncomfortable and that the other boys wouldn’t stop, she says.

“In this instance, I honestly don’t think the kids who targeted my son acted out of malice,” Alam said in an emailed statement to TIME. “They were acting out the fear and ignorance around them. My son was upset and angry, but he is okay. He is resilient and the kids are remorseful.”

However, it is just a small example of the stereotyping of people of Asian descent that has grown as news spreads of the rising numbers of cases of the coronavirus, which originated in the central Chinese city of Wuhan.

Some people on social media have detailed examples of people avoiding them in public spaces, or even confronting them in public about coronavirus. “People with a different national, ethnic or religious background have historically been accused of spreading germs regardless of what the science may say,” says Monica Schoch-Spana, a medical anthropologist and a senior scholar at the Johns Hopkins Center for Health Security.

The 2019 Novel Coronavirus has infected 17,489 and killed 362 people as of Monday morning. More than 180 cases have been diagnosed in countries around the world, including 11 in the U.S. There has been increasing concern about racist vitriol and incidents.

Already, movements on social media have sprung up to counter racist stereotyping. For example, in France the hashtag #JeNeSuisPasUnVirus, meaning “I am not a virus” is widely being used. Meanwhile, the University of California, Berkeley has faced backlash over a now deleted Instagram post listing xenophobia along with other possible reactions to the virus spread. “Please recognize that experiencing any of these can be normal reactions and that over the next few days or weeks you may experience periods of… Xenophobia: fears about interacting with those who might be from Asia and guilt about these feelings,” the post by the University Health Services’ Tang Center says.

UC Berkeley did not immediately respond to TIME’s request for comment, but the center apologized in a Thursday tweet.

With the advent of social media, the spread of misinformation, racial stereotyping and fear mongering can be exacerbated during times of public emergency. Social media has also resulted in “echo chambers” of people sharing inaccurate and racist information with people who may already have existing prejudice towards various groups.

This is not the first time social media in particular has contributed to the spread of xenophobia around such outbreaks.

“We saw this with the SARS and Ebola outbreaks,” says Alam, who is also a doctor in Georgetown, Ontario. “I did however think we had learned from the past. It’s 2020.”

“Unfortunately, social stigma, blame and discrimination are recurrent phenomenas during outbreaks over history,” Schoch-Spana says. “It’s really tied up in the fact that people often need to fix blame during an outbreak of a contagious disease.”

During an outbreak of H1N1 swine flu in 2009, Mexicans and many Latinos were scapegoated, and during the 2014 Ebola outbreak, so were people of African decent. “You can even go as far back as the early 80s when Haitians were blamed for HIV/Aids,” Schoch-Spana says.

The consequences of this racism, Schoch-Spana adds, are both moral and medical. “Preventing social stigma in the context of an outbreak of infectious disease is not simply altruistic,” she says. “Historically, people in scapegoated groups can be more reluctant to seek out medical care when they’re symptomatic.”

The World Health Organization (WHO), the U.S. Centers for Disease Control and Prevention (CDC) and other official agencies have repeatedly urged against racism, stereotyping and making assumptions during the outbreak of Novel Coronavirus. “We should not let by fear or panic guide our actions,” said Nancy Messonnier, director of the National Center for Immunization and Respiratory Diseases at the CDC, during a Friday press call. “We should not assume because someone is of Asian descent that they have the new coronavirus.”

On Friday, the United States declared a state of emergency and announced it would temporarily deny entry to foreign nationals who “pose a risk” of transmitting the virus. The move contrasts what the WHO advised on Thursday, insisting “there is no reason for measures that unnecessarily interfere with international travel and trade.” The WHO has traditionally advised against restrictions of travel for fear it can stigmatize those who are sick.

But, Schoch-Spana says, there is another, more positive pattern of human behavior she has noticed recently that falls in line with previous outbreaks: defenders, and people actively working against racism. Social media has also helped people to share their experiences and raise awareness of what is happening, an important component in combating racism and xenophobia.

“If you look across outbreaks over history, you have people really rising to the occasion,” she says. During past outbreaks, for example the influenza pandemic of 1918, people stepped up to volunteer to transport the ill to local hospitals or deliver food to sick families. “There’s also, actually, a more frequent impulse to stand together in a community to deal with a potential infectious disease.”

Alam decided to share her son’s experience on Twitter shortly after the incident occurred on Wednesday. It has received 31.3 thousand likes and 6.3 thousand retweets at the time of publication. People commented sharing their support, and shared similar experiences. “I know social media can be a double edged sword,” Alam says. “But the reaction to my tweets has been overwhelming. I’m amazed by the conversation it’s generated around the world…I’m so touched and inspired. It’s beautiful, the humanity.”

Schoch-Spana advises that everyone, individuals, political leaders, businesses or others, self-assess whether their actions in response to the coronavirus outbreak come from a place of prejudice.

“Even before disease shows up on the scene, xenophobia exists,” she says. “It’s a pre-existing condition…but people need to understand that in pandemics, we are all vulnerable and we need each other.” 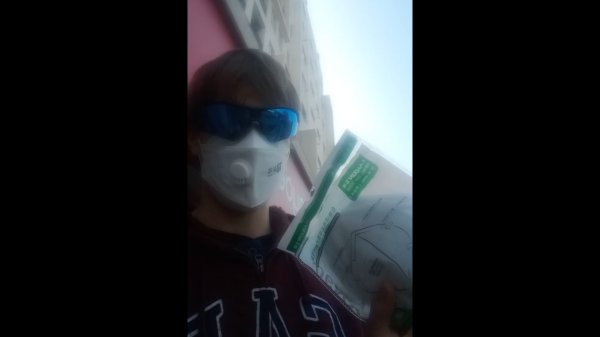 U.S. Citizens Film What It's Like in Wuhan During the Coronavirus Lockdown
Next Up: Editor's Pick