Thai Opposition Future Forward Party Avoids Being Disbanded, But Its Troubles Are Far From Over

Thanathorn Juangroongruangkit (C), leader of the Future Forward party, with party officials and supporters at their headquarters to watch a broadcast of a ruling by Thailand's Constitutional Court in Bangkok on Jan. 21, 2020.
Romeo Gacad—AFP/Getty Images
By Amy Gunia

Thailand’s upstart new opposition party avoided being disbanded on Tuesday when the country’s constitutional court found it and its leaders not guilty of attempting to overthrow the monarchy.

The case also accused the party of links to the Illuminati, a secret society that conspiracy theorists say seeks world domination.

But, the Future Forward Party and its founder Thanathorn Juangroongruangkit still face a raft of legal challenges from the military-led Thai government. The Future Forward Party swept to power in 2019 elections, buoyed by young voters supportive of its calls for democratic reform and curtailment of military power.

Human rights observers applauded the decision, and called for the government to drop the remaining charges against the party.

“While we welcome today’s decision, [the FFF] remains at risk of dissolution and is still facing a myriad of other politically motivated charges,” Charles Santiago, a Malaysian lawmaker and the chair of the regional human rights group ASEAN Parliamentarians for Human Rights, said in a statement after the ruling.

“If Thailand’s government wants to restore faith into its so-called ‘return to democracy’ it should immediately drop all politically motivated charges against the [FFP] and democracy activists.”

More than 25 legal cases have been brought against the Future Forward Party [FFP], which is Thailand’s third-biggest political party, and its members. The party’s charismatic, billionaire leader, Thanathorn, was disqualified from parliament over allegations that he breached media shareholding rules intended to create a level playing field among political candidates.

Although Thailand maintains a democratic facade, the former general who seized control of the government in a 2014 military coup was installed as prime minister in 2019 elections that critics say were stacked in the military’s favor and fraught with accusations of voting irregularities.

Experts say that the military-led government, which is backed by the country’s monarchy, is targeting the FFP with politically-motivated charges because it sees the party as a threat to its grip on power.

“The government and the military, which are obviously closely intertwined, view Future Forward as a party with the potential to challenge for power,” Joshua Kurlantzick, a senior fellow for Southeast Asia at the New York-based Council on Foreign Relations, told TIME before the ruling. “And the past two decades…have shown that the military, its allies, and its favored political parties will brook no real challenge to their party.” 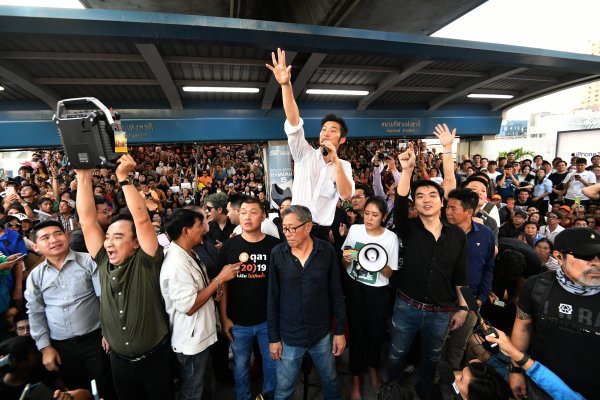 Thailand’s Future Forward Party Has the Support of Young Thais. A Court Could Disband It Entirely
Next Up: Editor's Pick