Violence in Syria Stokes Fears of a Coming ‘Bloodbath.’ Will Trump Act?

A man rides in a truck as civilians flee a Syrian military offensive in Idlib province on the main road near Hazano, Syria, Tuesday, Dec. 24, 2019.
Ghaith al-Sayed––AP
By W.J. Hennigan

Nearly a decade into a conflict defined by mass carnage and war crimes, Syria is suffering through what may be the worst humanitarian crisis in its blood-soaked civil war. For months, the Syrian military, backed by Russian air strikes, has been trying to wrest control of the northern territory of Idlib, the last province held by opposition forces. The Syrian Observatory for Human Rights has documented the death of 1,964 civilians there over the last year, as daily bombing runs have blown apart hospitals, schools, and markets. A UN spokesman told reporters Friday the “relentless violence” could “end in a bloodbath.”

To avoid getting caught in the crossfire, nearly 900,000 people have left their homes since December, most of them heading north toward the Turkish border through the snow in sub-zero temperatures. The vast majority of the displaced residents are women and children, who, if they’re fortunate, find space in makeshift displacement camps with tents that are stretched beyond capacity without basic services. But Turkey has closed off its 550-mile border, leaving thousands to live in the open among the icy hillsides or unfinished buildings, the UN says. Mothers are burning garbage to keep children warm. Babies and small children are freezing to death.

Despite the unrelenting violence, which can be viewed daily through images posted to social media, the Trump Administration has done little to stanch the bloodshed. President Donald Trump ordered U.S. forces to hastily withdraw from the war-torn country in October and has scarcely acknowledged the climbing death toll. The silence reflects his rejection of the rules-based international order developed after World War II in favor of a transactional “American First” approach to foreign policy. Rather than harnessing the United States’ influence as the world’s only superpower to impose stability in Idlib, the Administration has made the cold calculation that it is a problem for other nations to puzzle out.

“The idea that America must do something, I just find that to be — I don’t even see that as being a real argument,” Robert O’Brien, Trump’s National Security Adviser, said February 11 at an event in Washington. “What are we supposed to do to stop that? We’re supposed to parachute in as a global policeman and hold up a stop sign and say, ‘stop this, Turkey, stop this, Russia, stop this, Iran, stop this, Syria?’”

Critics say that apathy has emboldened the Russia-backed government offensive and helped dilute the international community’s humanitarian response to the crisis. “The Trump Administration has publicly assured the Russians and the Assad regime that they will not have to deal with U.S. military strikes aimed at protecting civilians from mass homicide and state terror,” says Frederic Hof, who advised President Barack Obama on Syria and worked on Middle East issues under the Reagan and George H.W. Bush Administrations. “For people like Vladimir Putin and Bashar al-Assad this is a bright green light to do as they wish.”

The winter hellscape that has emerged in Syria in recent weeks has been years in the making. Various rebel groups, once defeated on the battlefield, have fled to Idlib in recent years, which was established as a “de-escalation zone” guaranteed by Turkey, Russia and Iran. As President Bashar al-Assad’s forces retook areas like Aleppo and eastern Ghouta, surrendering fighters and their families were sent there under a deal negotiated by the regime’s ally Russia. Now it has become the last major obstacle to Assad declaring victory in the nine-year-long war.

But even though the humanitarian community could see this catastrophe coming, the situation on the ground has exceeded everyone’s worst-case planning scenarios. The population of Idlib, estimated at 3 million people, is converging into a strip of land along the Turkey-Syria border with no place to go, the UN says. As the government continues to take control of rebel-held communities, the frontlines are creeping closer to densely populated areas. Ten hospitals and 19 schools were either directly hit or affected by airstrikes close since the beginning of the year, according to the UN.

Zaher Sahloul, a physician and executive director of nonprofit MedGlobal, visited Idlib in January, his fourteenth medical mission to Syria. He described a dire, apocalyptic scene unfolding in Idlib City with increasingly desperate people seeking refuge wherever they can find it. Old buildings have become overcrowded shelters, creating privacy and protection concerns for women and girls that has reportedly led to a number of rape incidents, the U.N. says.

“You have classrooms with two or three families, 20 people in one room,” Sahloul says, describing one derelict school he visited. “It’s freezing cold inside. So they are putting in the stoves plastic bags, old rubber shoes…because diesel fuel is not available, wood is not available, so they are using plastic, and these are carcinogens.” The poisonous air, he says, is causing everyone to suffer coughing fits.

Sahloul took pictures on his trip of Idlib City’s national stadium, packed with aid tents that were stamped with international logos, clearly housing civilians. The same spot was bombed the day after Sahloul left. The doctor says more than a dozen people were reported killed, including children.

As the fighting surges, so does people’s need for care. But humanitarian workers are displaced themselves, leaving behind equipment, warehouses and offices. Delivery of humanitarian assistance inside Idlib, some of which the U.S. government helps provide, often gets interrupted. Aid shipments over the Bab al-Hawa Border Crossing between Syria and Turkey provides a lifeline to Idlib but are temporarily suspended when violence intensifies. “It’s difficult to paint a scenario more tragic than what’s happening in Idlib right now,” says Sara Kayyali, a Human Rights Watch researcher on Syria. “This catastrophe has been so well documented, yet there’s been no meaningful response from the global community.”

The lack of a robust, coordinated international intervention serves as a grim example of what’s bound to occur without American leadership, says Eric Edelman, former ambassador to Turkey under President George W. Bush. “If the U.S. isn’t playing the role of the main keeper of the international system and using its convening power to stop bloodshed like this, more of it is going to happen,” he says.

The Obama Administration was also criticized for its lack of coherent policy and inaction in Syria after war broke out between Assad and opposition fighters in 2011. But while former President Obama avoided heavy military intervention, opting instead to deploy around 2,000 troops to help prosecute the war against ISIS, Washington was working diplomatically toward establishing a ceasefire and to protect refugees of the wider Syrian civil war.

Trump has, at times, taken a more muscular approach in the country’s civil war, twice authorizing retaliatory airstrikes against Syrian forces for using chemical weapons against civilians. And when Assad’s forces were first planning an offensive in Idlib in 2018, Trump publicly warned Assad’s allies not to “recklessly attack” Idlib. “The Russians and Iranians would be making a grave humanitarian mistake to take part in this potential human tragedy. Hundreds of thousands of people could be killed. Don’t let that happen!” Trump tweeted.

Ultimately, that Idlib offensive was stood down, and Turkey and Russia signed an agreement to create a demilitarized zone in the province and stop Assad troops from attacks there. The border was closed to keep refugees — and terrorists— from flooding north into Turkey and stop the violence from spilling over. (Idlib is dominated by Hayat Tahrir al-Sham, a group associated with al-Qaeda.) Turkey built 12 military observation posts around the province to stave off the fighting. This time around, there are scant signs that the White House is mobilizing diplomats to nudge foreign powers toward a solution.

Trump hasn’t been shy in vocalizing his aversion to overseas entanglements, but Middle East experts and human rights officials stress that there’s a middle road between refusing to act and engaging in open-ended U.S. military and diplomatic interventions of the kind seen in Iraq and Afghanistan.

“At the very least, the Administration has to come out and say it’s unacceptable to have one million people being uprooted because of a military offensive in which war crimes are routinely being carried out,” says Philippe Nassif, Amnesty International USA’s advocacy director for the Middle East and North Africa. “It’s shameful. Every diplomatic tool should be used to talk to the Russians, Syrians and Turks to deescalate and protect these people fleeing from violence. None of that is happening.”

Instead, the Administration largely left it to Turkey, a NATO ally, to deal with the fallout, Turkey has long fashioned itself the protector of the region, as evidenced in the early agreement with Russia; when Trump pulled troops from northern Syria in October, it was at Turkey’s request. Ankara has moved troops, tanks and artillery to defend its border. But as the conflict deepened and dozens of Turkish forces have been killed, Ankara has buckled under the pressure. Turkey has already taken in 3.6 million displaced Syrians since the start of the war. The last thing Turkish President Tayyip Erdogan wants is a military confrontation that’s sending another wave of refugees his way.

Robert Ford, the U.S. ambassador to Syria from 2010 to 2014, says Turkey needs help from the U.S. military. “I’m not asking for American forces to deploy into Syria, but instead be ready to help Turkish forces inside Turkey, which are… trying to deter the advance of these Syrian regime forces,” he told reporters during an event Thursday on Capitol Hill that aimed to raise awareness of U.S. lawmakers.

Ford, now a senior fellow with the Middle East Institute in Washington, later told TIME it was the “worst case scenario” the government feared during his time in the Obama Administration: Assad is finishing off the last remnants of resistance, and also challenging the security of Turkey. “We’ve never seen such bitter fighting so close to a NATO state,” he says.

Last year, Congress passed a bill that included legislation known as the “Caesar Syrian Civilian Protection Act of 2019,” which authorized financial sanctions on Syrian officials who carried out war crimes against the Syrian population. It was a far-reaching and important bipartisan move to show that the U.S. government does, in fact, care about what’s occurring in Syria, according Mouaz Moustafa, the executive director of the non-governmental group, The Syrian Emergency Task Force.

Moustafa, who appeared at the Capitol Hill event with Ford, says the Syrian people deserve more sympathy. He described meeting child refugees along the border who were burned, blinded and maimed by Russian and Syrian airstrikes. “We’re all just appalled by what’s happening in Idlib. But what’s more outrageous is the lack of outrage that we’re seeing in the United States and, quite frankly, the Western world,” he says. “No one is talking about what’s unfolding there, no one is speaking out for children, some of whom have been burned to a cinder.”

Yet over nine years of continuous war in Syria, the world has largely become calloused to violence there – no matter how grisly. Before the event broke up, Moustafa and other organizers pleaded with the young Congressional staffers who were milling in the back of the conference room to tell their bosses about what they heard that afternoon.

—With reporting by Kimberly Dozier/Washington 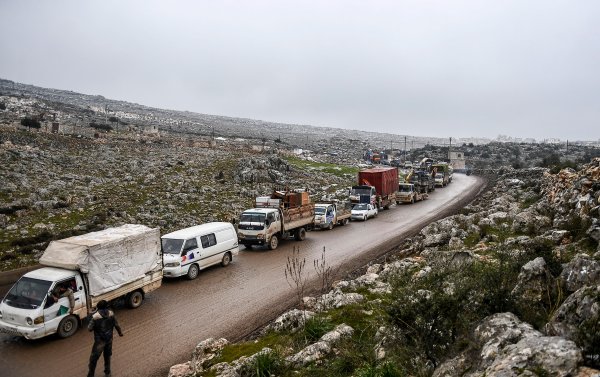 Angelina Jolie: The Cost of Inaction in Syria is Too High
Next Up: Editor's Pick