President Donald Trump announced Monday his intention to level economic sanctions, hike tariffs and halt trade negotiations with Turkey as a result of its military incursion against U.S.-aligned Kurdish forces in northern Syria.

“I will soon be issuing an Executive Order authorizing the imposition of sanctions against current and former officials of the Government of Turkey and any persons contributing to Turkey’s destabilizing actions in northeast Syria. Likewise, the steel tariffs will be increased back up to 50 percent, the level prior to reduction in May,” Trump said in a statement. “The United States will also immediately stop negotiations, being led by the Department of Commerce, with respect to a $100 billion trade deal with Turkey.”

The announcement follows a high-level White House national security meeting to develop a strategy to contain the chaos unleashed by Trump’s impromptu decision last week to withdraw American troops from northern Syria ahead of Turkey’s military offensive. The resulting violence has set off a cascade of developments on the ground in Syria that risks upending five years of progress in the war against ISIS, and now pits the U.S. against a fellow NATO alliance member.

A man walks on a street in the Turkish city of Ceylanpınar while smoke rises from the Syrian town of Ras al-Ayn, during bombardment by Turkish forces, on Oct. 10, 2019.
Emanuele Satolli

In recent days, the Turks fired artillery shells that landed within several hundred yards within U.S. forces still in the war-torn country; hundreds of ISIS family members and sympathizers escaped a camp guarded by Kurdish forces; and the Kurds switched military allegiances out of necessity, opting to work with Syria’s President Bashar Assad and Russia instead of the United States. The U.S. military has already begun withdrawing nearly all of its 1,000 troops from Syria, which means it will be unable to transfer the highest value ISIS prisoners out of Syria.

Beyond the battlefield, the fallout is likely to have long-term implications for U.S. foreign policy alliances and credibility on the world stage, seven Administration officials tell TIME. Each of the officials who spoke to TIME on the devolving situation in Syria did so on the condition of anonymity because they were not authorized to speak publicly on the matter. “This will almost certainly go down as one of the biggest foreign and security policy decisions made in our lifetime,” an Administration official says. “We are about to undo five years worth of progress, made an unstable region even worse, betrayed our partners, and shaken the faith of our allies. I am unaware of anyone in government service that was consulted before this decision, and unaware of anyone in that same group that thinks this is a good idea.”

Ryan Crocker, who served as U.S. ambassador to Afghanistan, Iraq, Pakistan, Syria, Kuwait and Lebanon over his four decade-long career with the State Department, says Trump handled the situation with Turkey in the worst way possible. With little warning, he removed U.S. troops from northern Syria, effectively green-lighting a Turkish invasion. “We could have avoided this with a quiet, consistent policy based on the above, which might also have given us a channel to Damascus,” he says. “They and their allies are winning; we need channels to them. Another avoidable disaster.”

Turkish-backed Syrian rebels shout on the back of a pickup truck on a street in the Turkish border town of Akçakale on Oct. 14, 2019.
Emanuele Satolli

The President’s decision to remove U.S. troops from northern Syria in a Oct. 6 phone call with Erodogan came despite months of aides’ repeated warnings about the dangers of abandoning America’s Kurdish allies. A day later, as Turkish offensive began, Trump took to Twitter by threatening to “obliterate” and “destroy” Turkey’s economy if Erdogan took any steps Trump considered to be “off limits.”

His decision to use sanctions is a tactic that Trump’s employed before. But until now, the Trump Administration has mainly leveled them against foreign adversaries, such as North Korea and Iran, to bleed their economies dry and force them to the negotiating table. In this case, the Treasury Department will be sending a clear message to a foreign ally.

“The United States will aggressively use economic sanctions to target those who enable, facilitate, and finance these heinous acts in Syria,” Trump said Monday in announcing the measures. “I am fully prepared to swiftly destroy Turkey’s economy if Turkish leaders continue down this dangerous and destructive path.”

Over the weekend, Trump ordered the complete withdrawal of about 1,000 troops from Syria to take place within weeks, as the Turkish against the Kurds fighters cut U.S. supply lines and jeopardized U.S. forces. The only exception is a remote base in eastern Syria located at Al Tanf, where the borders of Jordan, Syria and Iraq meet. “This orderly and deliberate withdrawal includes all personnel and military equipment,” one official says. “These forces will be re-located to other areas in the region.“

A wounded Turkish-backed Syrian fighter who was evacuated from the Syrian town of Tel Abyad is transported in a pickup truck toward the hospital in Akçakale, Turkey, on Oct. 12, 2019.
Emanuele Satolli

U.S. Special Operations advisers steadily began to build up the Syrian Democratic Forces (SDF) — of which the Kurds are an integral part — by training and arming them. Kurdish leadership knew the relationship was one of convenience, but hoped it wouldn’t end abruptly. Although ISIS is no longer in control of any major city in Iraq or Syria, the fighting is not over completely.

Barbara Leaf, a former ambassador to the United Arab Emirates and now with the Washington Institute for Near East Policy, says Trump’s decision in Syria has diminished U.S. credibility abroad. “With one heedless blow, he devastated a security partner that had fought ISIS courageously and at great cost with and on behalf of U.S. forces; paved the way for assaults by Turkish forces and militias on helpless civilians; and destroyed U.S. leverage and credibility,” she says. “Who benefited? Iran, Russia, Turkey and ISIS. We will not recover from this debacle any time soon.”

The U.S. still relies on the SDF to destroy remaining ISIS cells in Syria and to guard more than 30 detention facilities that hold about 11,000 ISIS detainees across northern Syria. Since the Turkish invasion, the SDF has posted videos to social media channels showing the detainees fleeing the prisons. Defense Secretary Mark Esper admitted in a statement Monday that Turkey’s incursion “resulted in the release of many dangerous ISIS detainees.”

A man places a Turkish flag in the courtyard of a mosque before the funeral of a nine-month-old Syrian baby, who was killed during rocket and mortar attacks in Akçakale, Turkey, on Oct. 11, 2019.
Emanuele Satolli

A U.S. counterterrorism official said that the U.S. never had a complete accounting of suspected ISIS members and recruits held in the camps in northern Syria, and no idea how many have escaped, much less how many of those identified as “high value” are now on the loose.

“It’s not like we had a complete roster, or even firm ideas of who is behind which nom de guerre,” said the official, who spoke on the condition of anonymity to avoid any potential retribution for criticizing the Administration. The official said U.S. forces scrambled to secure as many as possible of those identified as hardcore terrorists, including some responsible for the murders of foreign and Syrian or Iraqi prisoners.

The effort was “largely unsuccessful,” the official said, describing it as too little, too late. “The failure will be obvious in the worst possible way, and no one knows when or where. Europe? Iraq? Lebanon? Here in the U.S. or in some other allied country like Saudi Arabia or the UAE? Some embassy or other post somewhere?” 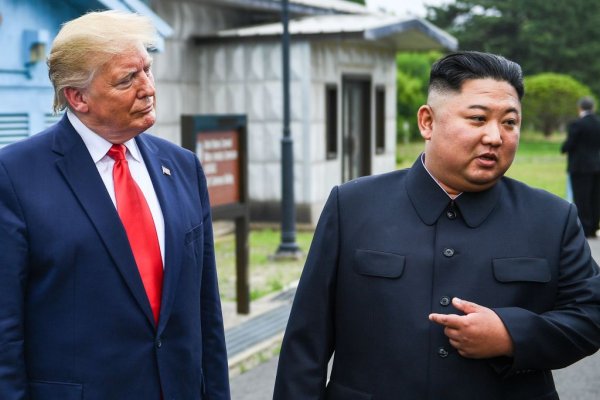 Trump 'No Interest' in NK Threat
Next Up: Editor's Pick