As Passengers Leave Coronavirus-Stricken Cruise Ship, Crew Members Are Moving Into Their Cabins for a Second Quarantine

As passengers started leaving the Diamond Princess Wednesday following a quarantine that saw them largely confined to their rooms for two weeks, another quarantine is about to begin.

The 1,000-some crew members still left on the coronavirus-stricken ship will soon be moving from their decks below the waterline—where they share rooms, toilets and dining areas—into the very passenger cabins that they stayed on board to serve during the first quarantine, several crew members and a passenger tell TIME.

Crew members said the empty passenger rooms will be sanitized and fumigated, and that they would be transferred to complete a second 14-day quarantine there. Crew members will be assigned to individual rooms, but will likely only begin their quarantine on Friday, after majority of the passengers have left.

The number of coronavirus cases on the Diamond Princess, docked in Yokohama, Japan, has increased rapidly since the first patients were confirmed two weeks ago. On Wednesday, as hundreds of passengers packed their bags and readied to leave, Japanese health authorities announced that 79 more people had tested positive for the coronavirus. The new additions bring the total number of infections on the cruise to 621 among the 3,645 passengers and crew on board, making for an infection rate of around 17%.

The cruise is the largest cluster of novel coronavirus cases outside of mainland China, where over 74,000 have been diagnosed and more than 2,000 have died.

A health worker is seen on the Diamond Princess docked at Daikoku Wharf in Yokohama, Japan, on Feb. 19, 2020.
The Yomiuri Shimbun/AP Images

One crew member said Princess Cruises, the company that operates Diamond Princess, has informed them that they will be moving into rooms with balconies, a welcome change from their below-deck, windowless cabins that they share with up to two others.

“Some of our colleagues are preparing their stuff because they’re going to transfer to passengers cabins,” said Obet, a crew member who asked to go by a pseudonym due to a company media policy. Obet, who is from the Philippines, is in a hospital on shore after testing positive for the virus, along with his cabin-mate.

As the number of coronavirus cases on the cruise continues to rise, many have voiced concern that the quarantine conditions on the ship have failed to contain the outbreak—especially among crew members.

“The crew needed to move around. They faced enhanced risk relative to passengers who stayed in their rooms,” says Charles Chiu, a professor of laboratory medicine at the University of California, San Francisco.

Since the quarantine began on Feb. 5, crew members have mostly continued their duties, preparing meals, doing sanitation work and delivering food to passengers.

A lack of private cabins for crew members also meant that those who reported symptoms were only told to isolate themselves in their rooms, at the risk of passing the virus to their roommates. “Crew members can easily get infected in that situation,” Chiu adds.

Japanese health authorities said Tuesday that all passengers on board have had their samples taken, and will only be allowed to disembark if they test negative. But not all crew members have been tested yet, some told TIME.

Princess Cruises did not respond to questions about living conditions and quarantine for the crew.

On Wednesday, Philippines Foreign Affairs Secretary Teddy Boy Locsin ordered the country’s embassy in Tokyo to immediately bring home the around 500 Filipinos aboard the cruise ship. At least 41 Filipino crew members have tested positive for the virus.

Sarah Arana, a 52-year-old American passenger who has since been brought back to the U.S. on a charter flight, told TIME that the president of Princess Cruises announced in a video downloaded to their cabin TVs that crew would be moved into passenger rooms after they disembark.

The video “also said that crew would be paid in full during the quarantine for that 14 days,” Arana added.

Princess Cruises said in a statement Tuesday that the ship has begun working with celebrity chef José Andrés’s non-profit organization, World Central Kitchen, to provide food for passengers and crew.

One crew member who also asked to go by an alias, Paul, due to company media policy, said that all facilities including the kitchen on the ship would soon start shutting down.

He said that trucks belonging to World Central Kitchen had been parked outside the ship since Tuesday morning. “These trucks will be [ones] to provide [food for us]” he added. “The company partnered with a shoreside organization to help prepare the food for those who remain onboard.”

Paul told TIME that most of the crew members who are infected with the virus have been delivering food to passengers three times a day.

As crew members wait to be tested, and some expect to receive their test results by Feb. 21, experts say there is concern that the number of confirmed cases among crew could rise further.

“I have a feeling that we might see additional crew becoming infected,” Chiu says. “But with the original passengers gone, and if crew are isolated in separate rooms, there’s a greater chance that we’ll see the infections die down over the next couple of days.” 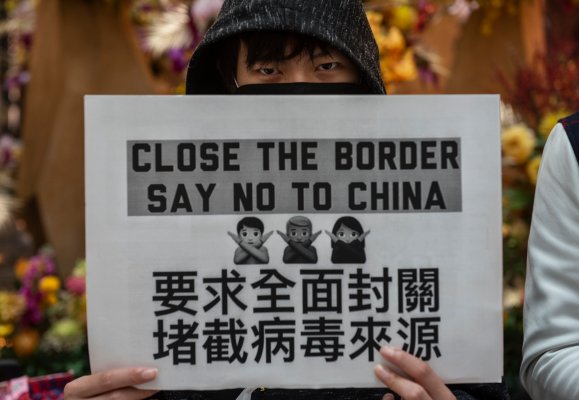 Virus Brings Out Ugly Side of Hong Kong's Protest Movement
Next Up: Editor's Pick