Larry Ellison attends the Rebels With A Cause Gala 2019 at Lawrence J Ellison Institute for Transformative Medicine of USC on Oct. 24, 2019 in Los Angeles.
Phillip Faraone—Getty Images
By Madeleine Carlisle

Oracle founder and CTO Larry Ellison‘s decision to throw a fundraiser for President Donald Trump has apparently angered some of his employees. So much so that they have allegedly set up a Change.org petition demanding he cancel the Feb. 19 event and have asked other Oracle employees to sign.

The petition, first reported by Vox, launched on Friday and so far has over 1,000 signatures from alleged employees. (The computer technology company employs around 136,000 people worldwide).

It asks company leadership to “[stand] up against Ellison’s damaging association with the Trump campaign” and says his support of Trump “does not affirm Oracle’s core values of diversity, inclusiveness and ethical business conduct.”

“As Oracle employees, we must hold our leaders accountable for upholding their ethical responsibilities,” the petition, which anyone can sign, continues. “Ellison’s financial support of Donald Trump endangers the well-being of women, immigrants, communities of color, the environment, LGBTQ and trans communities, disabled people and workers everywhere.”

Oracle did not immediately respond to TIME’s request for comment.

Ellison is worth over $69 billion and is the fifth richest person in the U.S. according to Forbes. The Desert Sun reports that at Ellison’s upcoming fundraiser, for $100,000, guests can join a golf outing and take a photograph with the President. For $250,000, guests can also reportedly join a round table discussion.

“It signals what I and many others have always feared,” an Oracle employee reportedly told Vox. “Culturally, Oracle is the type of place where you’ll work with many lovely people who you share common ideals with, but those ideals have to be left at the door in service of the company.” Vox reports that five current and one former employee described “bubbling frustration at Oracle on Thursday.” Some employees started a Slack channel and added the link to the petition to their email signature, according to Vox.

The petition exhibits how the President has remained deeply unpopular in Silicon Valley, although he has continued to quietly fundraise from a select group of wealthy donors. The Wall Street Journal reports that Trump held a fundraiser in Palo Alto back in September; tickets reportedly cost up to $100,000 per couple and was held at a hidden location. Oracle CEO Safra Catz also served on Trump’s transition team, a decision that led Oracle senior executive George Polisner to resign in 2016. 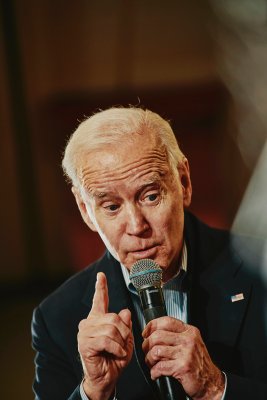 Why Joe Biden's Campaign Is In Trouble
Next Up: Editor's Pick