While Kravitz and Bonet are playing vastly different roles, there’s no denying how much Kravitz looks like her mother did in the film. In fact, the uncanny resemblance that the two share is something frequently referenced on Kravitz’s Instagram with throwback photos of her and her mother during younger days. Their status as look-alikes was riffed on in a widely-shared and very memorable advertising campaign for Calvin Klein in 2016, but might be best expressed in the photos of them together in current day.

With that in mind, here’s a look back at the 10 times that Lisa Bonet and Zoe Kravitz were basically twins.

While attending the Vanity Fair Oscars after-party in 2015

The mother and daughter posed together ahead of the Vanity Fair Oscar party.

In this throwback picture of Bonet, Lenny Kravitz, Zoe, and L.L. Cool J

Kravitz has sported a similar cropped blonde hairdo to her mother’s in this picture.

With Kravitz’s tribute to the Rolling Stone cover that Bonet shot while pregnant with her.

Bonet shot the original cover (also dubbed “The Hot Issue”) while she was 2 months pregnant with Kravitz.

Kravitz and Bonet turned heads walking the red carpet at the InStyle party in 2015.

In this photo of baby photo of Kravitz

Bonet and Kravitz posed in flower crowns for this sweet snapshot.

In a throwback photo of Bonet and Lenny Kravitz from younger days.

From her braids to her nose ring, Bonet and Kravitz share a striking resemblance.

In this heartwarming photo of them from many years ago.

Mood, if there ever was one.

In this adorable family portrait that was so cool that even Beyoncé paid homage to it.

A compliment of the highest order.

At the 2018 Vanity Fair Oscars party 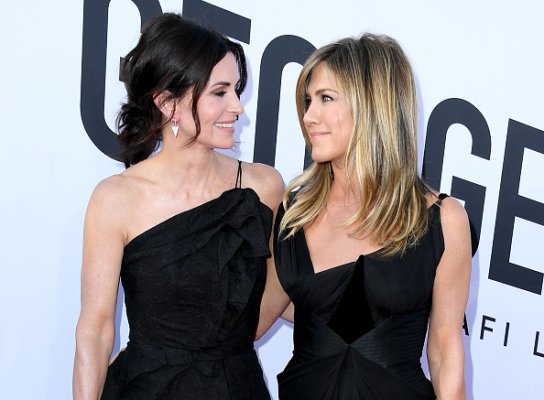 Courteney Cox Dresses Like Jennifer Aniston for Her Birthday and Nails It
Next Up: Editor's Pick