Joe Biden Says It's Not Time to Panic. But His Campaign Is In Trouble

Former Vice President Joe Biden speaking at his GOTV Event at Ashworth by the Sea in Hampton, N.H. on Feb. 9, 2020.
Tony Luong for TIME
By Philip Elliott/Manchester, N.H.

After back-to-back dismal finishes, former Vice President Joe Biden’s campaign is scrambling to sharpen its strategy as it heads into a do-or-die stretch.

Biden advisers spent much of Wednesday on the phone with donors and supporters, seeking to reassure loyalists that it’s not time to panic. They told allies to look for more of Biden on television, both in interviews and paid ads, beginning with a trip to The View on Thursday. After months of focusing their fire on President Trump, they plan to throw more barbs at Sen. Bernie Sanders of Vermont and former South Bend, Ind., Mayor Pete Buttigieg, the leading duo coming out of the first two states. And they started laying the groundwork to challenge former New York Mayor Michael Bloomberg on questions about his wealth and his record on race.

The all-is-well mantra doesn’t mask the fact that this is not the campaign Biden set out to run. Biden has campaigned on his electability, but he finished fourth in Iowa and fifth in New Hampshire. Biden’s allies sought to calm fears by noting that Bill Clinton was one-for-11 in the early contests when he ran in 1992. What’s also true? During his three abbreviated runs for the Democratic presidential nomination, Biden has yet to finish higher than fourth in a single primary or caucus.

Biden allies say the plan has always been to grind out wins over a long primary contest, beginning in South Carolina, where two-thirds of the Democratic electorate is expected to be African American. But there are signs that Biden’s firewall in South Carolina is not impenetrable. One black legislator endorsed Buttigieg’s campaign on Wednesday. Billionaire Tom Steyer hired another to advise his campaign. There hasn’t been a good public poll of South Carolinians since Biden’s stumbles, so there’s no sure way of knowing if that bloc will stay with Biden now that he’s faltered. Heading into Iowa, 30% of black voters in South Carolina backed Biden, according to a Charleston, S.C., Post and Courier-Change Research poll. That was down from the 45% support he received among black voters according to an August installment of the same poll.

Advisers acknowledge that they have limited time to turn things around. Biden left New Hampshire on primary day to jet to South Carolina, but his public schedule does not have him returning to the state until Feb. 24, five days before the primary. Unlike his rivals, Biden isn’t spending much time in the Super Tuesday states that vote on March 3, either. Even if he performs well in South Carolina as expected, there isn’t much time for momentum to take hold before Super Tuesday. In some of those states, early balloting has already begun.

There are also questions about a possible cash crunch. Biden hasn’t reported his January fundraising tally yet, but Sen. Chris Coons of Delaware says it was the best month the campaign has seen yet. Still, these campaigns are expensive affairs, and Biden—whose fundraising has lagged that of Sanders and Buttigieg—has been ferrying between states on private jets. A plane he has used before flew from Manchester, N.H., and Wilmington, Del., last week as the Biden team huddled for a shake-up of top leadership. The same plane on Tuesday went from New Hampshire to South Carolina, coinciding with Biden’s schedule. And after Biden gave remarks about the New Hampshire outcome while in Columbia, S.C., that plane again returned to Delaware. Biden was set to collect checks in New York at two fundraisers this week, and his finance team said no one pulled out of either sold-out event. In fact, they assert the results out of New Hampshire actually attracted new donors on Wednesday, as Wall Street Democrats sought to stop the momentum of Sanders, a self-described democratic socialist.

The thinking among Biden’s inner circle is that rivals are just beginning to introduce themselves outside of Iowa and New Hampshire, while the former Vice President enjoys near-universal name ID among Democrats and deep wells of goodwill among African American voters who remember that the nation’s first black President tapped Biden as his understudy. The Biden campaign has been busy calling attention to Bloomberg’s previous support for stop-and-frisk policies he inherited and his late apology for continuing them. That may blunt Bloomberg’s inroads with black voters in the South. At the same time, the Biden team is finally opening the binders of research on Buttigieg’s record on race in South Bend.

In the meantime, Biden is planning daily events daily in Nevada beginning Friday. The state holds caucuses on Feb. 22, and its powerful culinary union remains on the sidelines. Biden’s team believes that the Medicare for All proposals put forth by Sanders and Massachusetts Sen. Elizabeth Warren will at least keep the union on the sidelines. An endorsement is ideal. Neutrality is acceptable. In the meantime, Biden is coasting with the endorsements from unions of electrical workers and firefighters.

If Biden can turn things around in Nevada and South Carolina, the campaign is telling donors, he can still emerge as a consensus candidate capable of stopping the Sanders threat. There’s only one problem: electability is the sermon he’s been preaching in subtle language since the start. If his survival in the race depends on South Carolina’s pulpits, he may need to find some more fiery Scripture. 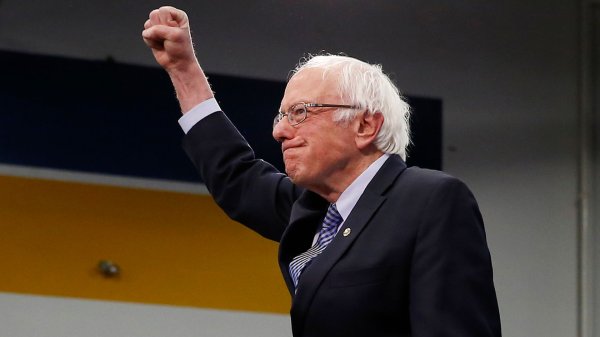 A History of Socialism in the United States
Next Up: Editor's Pick