After a Rocky Start in Iowa, Joe Biden Shakes Up His Campaign

After a bruising performance in Iowa, Joe Biden’s presidential campaign is shaking up its leadership and telling staff to “take a deep breath (or two or three) because this roller coaster of a campaign season has plenty of thrills yet to come,” according to an email sent to aides on Friday.

The team said is it giving more control over budgets and strategy to seasoned Biden adviser Anita Dunn, and has reached out successfully to Jennifer O’Malley Dillon, who ran Beto O’Rourke’s short-lived campaign and was crucial to Barack Obama’s get-out-the-vote operations, to take over his Nevada operation. O’Malley Dillon agreed to take on the task on a volunteer basis.

The moves sent shivers and cheers through a campaign that started as the one to beat but posted a distant fourth place in this week’s Iowa caucuses and is now lumbering into the final weekend of campaigning before New Hampshire votes on Feb. 11. Top Biden aides insisted it was not a demotion of campaign manager Greg Schultz, a familiar Biden hand who joined a raft of longtime counselors and friends who seemed unable to steady an unpredictable candidate.

Instead, these aides argued, it was a move to put one person in charge of strategic decisions and help reduce the internal debates that have been hobbling the organization. Indecision has plagued Biden’s campaign since its start in April; even its launching theme and date were fluid for months. Now, supporters of the move argue, there is one person — Dunn — in control who will take plans to Biden, rather than what has long been a committee of equals around Biden’s kitchen table.

Ownership of the Biden campaign has always been a collective task. Over the years, Biden has amassed a menagerie of trusted counselors. “No one ever checks out of Hotel Biden” is something of a joke in his orbit. In Biden’s telling, his children and grandchildren, his wife and siblings were instrumental in convincing him to run for the White House for a third time. Although she has no formal role in the campaign, Joe Biden’s sister Valerie was on the road with him in Iowa and regularly weighs in on decisions. Many alumni of his Senate and Vice Presidential offices were also offering their input. And longtime pals like Mike Donilon and Ted Kaufmann often find Biden asking for gut checks.

That conflicted advice amounted to chaos coming at the candidate, and, some have posited, contributed to a campaign whose biggest pitch to voters is that Biden can win by winning.

Schultz, who handled a political portfolio for Biden in the White House and after, announced the expanded role for Dunn in an email co-signed with Biden’s White House chief of staff Steve Ricchetti, a longtime Biden adviser and former lobbyist.

“We wanted to let you know that the Vice President has asked Anita Dunn to play an expanded role in the headquarters as we move forward to New Hampshire and beyond,” Schultz and Ricchetti wrote. “Most of you already know Anita or may have seen her hanging around communications — she will be working closely with us on campaign strategy and overall coordination on budget and personnel as we build a bigger campaign for the next phase.”

One Biden adviser stopped short of saying Dunn is now running the campaign, however, speaking on the condition of anonymity on a call with reporters. “The person in charge of the campaign is Joe Biden,” the adviser said. Later, other two top Biden hands separately but in almost unified messaging pointed out to TIME that Dunn had been involved with the Biden campaign since before its April launch and has worked with the Vice President since he joined the Obama campaign in 2008.

But if a new regime is put in place, it will be Dunn charting the plan. Dunn, a messaging and media maven who worked as a senior adviser and communications director in the Obama-era White House, has been splitting her time among the campaign bus, her home near Washington, D.C., and campaign headquarters, where her brief was largely communications and media strategy.

A shift at the top of a frontrunner’s campaign once voting is underway is unusual. Hillary Clinton fired her campaign manager after coming in third in Iowa during the 2008 caucuses. Biden aides insist Schultz is not facing that same fate, but is merely having some of his responsibilities taken out of his portfolio.

It’s unlikely the move will have any appreciable effect in the campaign’s approach to New Hampshire. Biden’s schedule was largely set weeks ago, although he did add two events this weekend for Joe Biden and four for wife Jill Biden.

Still, in a sign that the Biden campaign was static, the campaign also scheduled a Sunday evening fundraiser with Jill Biden; campaigns on the hunt typically are asking for votes, not dollars, before they leave the state. Asked about campaign fundraising, Sen. Chris Coons, a top Biden adviser, said the campaign was fine. “We had the best month ever last month,” he said ahead of Friday night’s debate near Manchester.

But Coons did acknowledge a shifting tone was coming, especially as former New York City Mayor Michael Bloomberg took Biden’s stumble as a cue to start ramping up his presidential bid as an alternative to Biden’s nomination. “Michael Bloomberg is literally spending hundreds of millions of dollars introducing himself to the American heartland. He’s well-known in New York. He’s well-known in the Mid-Atlantic,” Coons said. “But I think there are literally millions of people who have never heard of him in the major markets that will make up Super Tuesday.”

Coons signaled that the campaign also saw former South Bend, Ind., Mayor Pete Buttigieg as a threat. “The same challenge faces Mayor Pete. Pete Buttigieg, who has done well in this campaign, is still largely unknown and his record is somewhat limited,” Coons said. “As we get to Nevada and South Carolina, he faces a steep challenge in terms of introducing himself to an electorate that doesn’t really know him. Every one of these states, folks know Joe Biden.”

Those states may seem a long way off, however, to a campaign and candidate trying to smooth out a rocky organization coming out of Iowa and into New Hampshire, where polls suggest they could have another bad night. Biden hands insist he has faced tougher days than a campaign reorganization. 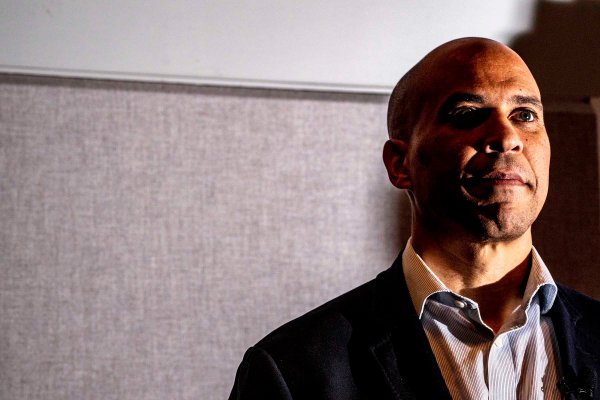 Cory Booker Ends His Presidential Bid
Next Up: Editor's Pick