The interior of "Wuhan Livingroom", which is converted into a hospital to receive patients infected with the novel coronavirus, in Wuhan, central China's Hubei Province, on Feb. 4, 2020.
Cai Yang—Xinhua/Polaris
Ideas
By Mark Honigsbaum
Honigsbaum is a medical historian and the author of The Pandemic Century: One Hundred Years of Panic, Hysteria, and Hubris.

“Everyone knows that pestilences have a way of recurring in the world,” observes Albert Camus in his novel The Plague. “Yet somehow we find it hard to believe in ones that crash down on our heads from a blue sky. There have been as many plagues as wars in history; yet plagues and wars always take people by surprise.”

Camus was imagining a fictional outbreak of plague in 1948 in Oran, a port city in northwest Algeria. But at a time when the world is reeling from a very real microbial emergency sparked by the emergence of a novel coronavirus in Wuhan, central China, his observations are as pertinent as ever.

Like the global emergency over Zika in 2015, or the emergency over the devastating West African Ebola outbreak the year before – or the global panic sparked by SARS (another coronavirus) in 2002-2003, the Wuhan coronavirus epidemic has once again wrong-footed medical experts and taken the world by surprise.

Whether the Wuhan outbreak turns out to be a mild pandemic like the 2009 swine flu, or a more severe one like the 1918 Spanish flu, which killed 50 million people worldwide, at present no one can say.

But if a century of pandemic responses has taught us anything, it is that while we may have gotten better at monitoring pandemic threats in what used to be called the “blank spaces” on the map, we also have a tendency to forget the lessons of medical history.

The first of these is that epidemics of emerging infectious diseases appear to be accelerating. In the 19th century it took several years for cholera and plague to spread from their endemic centers in India and China to Europe and North America following the trade routes plied by caravans, horses and sail ships.

That all changed with the advent of steam travel and the expansion of the European railway network. For instance, it was a steam ship, sailing from Japan via Honolulu, that most likely brought rats infected with plague to San Francisco in 1900. And ten years earlier, it was steam trains that spread the so-called “Russian” influenza throughout Europe. The result was that within four months of the first report of an outbreak in St Petersburg in December 1889, the Russian flu had been introduced to Berlin and Hamburg, from where it was carried by ocean-going liners to Liverpool, Boston and Buenos Aires.

The Russian flu sparked two further global waves of illness in 1892 and 1893, resulting in an estimated one million deaths, though the true casualties from the pandemic were probably higher. By contrast the three-waves of Spanish flu occurred during a brief 11-month period between the summer of 1918 and the spring of 1919. The pandemic, which coincided with the First World War, was almost certainly fueled by the rapid passage of American soldiers to the front lines in northern Europe via Atlantic troop carriers.

But the big game-changer has been international jet travel and the greater global connectivity that has come with it. Located at the centre of China’s airline network, Wuhan is both a domestic and international hub, with more than 100 non-stop flights to 22 countries worldwide. The result is that whereas during the 2002 SARS outbreak it took five months for the coronavirus to spread worldwide, this time it has taken just four weeks for the world to catch China’s cold.

Another important lesson from the recent run of epidemics is that by focusing too narrowly on microbial causation, we risk missing the wider ecological and environmental picture.

Seventy percent of emerging infectious diseases originate in the animal kingdom. Beginning with the AIDs pandemic of the 1980s, and continuing through SARS, and the recent Ebola and bird flu scares in the early 2000s, most outbreaks can be traced to so-called spillover events from animals to humans. Some of these can be prevented by better hygiene and regular inspections of wild animal markets. But others can be traced to the disturbance of ecological equilibriums or alterations to the environments in which pathogens habitually reside. This is especially true of viruses such as HIV and Ebola that are believed to circulate in discreet animal reservoirs.

For instance, the West African Ebola epidemic very likely began when children in Guinea dined on a local species of bat, known as lolibelo, that had taken up a roost in a rotten tree stump in the middle of their village. The bats usually reside in dry savannah on the edge of woodlands but appear to have been driven from their normal habitat by climate change and deforestation due to the activities of logging companies.

Bats are also thought to be the ultimate reservoir of coronaviruses, but the virus has also been isolated from snakes and palm civets, a game animal resembling a cat prized by the Chinese for its heat-giving energy. The SARS epidemic was almost certainly sparked by civets traded at a wild animal market in Shenzhen in southeast China. Likewise, the Wuhan outbreak appears to have begun at a wholesale seafood market which, despite its name, also sold wild animals, including wolf cubs, crocodiles, snakes and bats.

A third lesson is that China’s mega-cities – like vast urban conurbations in Asia, Africa, and South America – provide the ideal breeding grounds for the amplification and spread of novel pathogens by concentrating large numbers of people in cramped and often unsanitary spaces. Sometimes technology and alterations to our built environment can mitigate the risks that such overcrowding presents for the transfer of pathogens to people. Thus the plague abatement measures that followed the outbreaks of plague in San Francisco in 1901 and in Los Angeles in 1924, were effective at removing the rats and squirrels that harbored plague fleas from domestic homes and businesses.

Likewise, tower blocks and air conditioning systems are very effective ways of insulating people from the mosquitoes that transmit Zika and other diseases. But as became clear during the SARS outbreak when Hong Kong saw scores of infections at the Amoy Gardens apartment complex in Kowloon, our built environment can also present new disease risks.

Indeed, time and again, we assist microbes to occupy new ecological niches and spread to new places in ways that usually only become apparent after the event. In such circumstances, it is worth keeping in mind the view expressed by George Bernard Shaw in The Doctor’s Dilemma, namely that “The characteristic microbe of a disease might be a symptom instead of a cause.”

But perhaps the biggest lesson from the recent run of epidemics is that while scientific knowledge is always advancing, it can also be a trap, blinding us to the epidemic just around the corner ­­– the so-called Disease X’s.

Thus, in the case of SARS, our delay in realizing we were dealing with a dangerous new respiratory pathogen, was due in no small part to the WHO’s conviction that the world was on the brink of a pandemic of H5N1 avian influenza—a view that seemed to be confirmed when ducks, geese, and swans suddenly began dying in two Hong Kong parks.

Similarly, the 2014 Ebola outbreak was initially missed by the WHO, not least because few experts suspected that the virus, which had previously been associated with outbreaks in remote forested regions of central Africa, might pose a threat to West Africa, much less to cities such as Monrovia, Freetown, New York and Dallas.

In each case, what was “known” before the event that Ebola can’t reach a major urban area, much less a city in North America; that coronaviruses do not cause atypical pneumonias – was shown to be wrong and the experts were left looking foolish.

The good news this time round is that the new coronavirus was quickly identified by Chinese scientists, and despite the Chinese government’s initial suppression of warnings posted on social media by medics at the frontline of the outbreak, they rapidly shared the genetic sequence. This gives us hope we will be able to develop a vaccine, something that didn’t happen during SARS.

However, those efforts will certainly not be aided by misinformation about the efficacy, for instance, of face masks over sensible measures such as frequent hand-washing. Nor is it helpful to refer to the “exotic” Chinese taste for wild animals or, as one French newspaper did last week, post scare headlines about a “yellow alert.”

A final lesson of medical history is that during epidemics we need to choose our words carefully, lest language becomes a motor for xenophobia, stigma and prejudice, as occurred in the early 1980s when AIDs was wrongly labeled “the gay plague.” This is especially the case in our era of instantaneous digital communications, where misinformation and fake news travels faster and more widely than any virus. 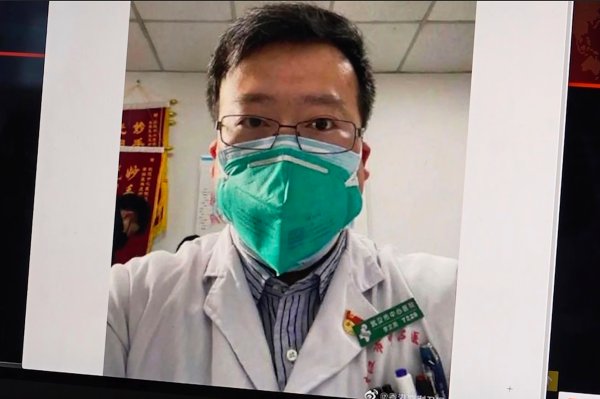 Doctor Who Sounded Early Alarm on Coronavirus Dies at 34
Next Up: Editor's Pick