How the Iowa Democratic Party Botched the Iowa Caucuses

No opportunity to practice using the technology in advance. Login issues. Difficulties reporting information. Long wait times on the phone.

These were some of the sporadic but widespread problems reported throughout the state of Iowa that led to a chaotic caucus night on Monday that did not immediately yield a clear winner from the 2020 Democratic presidential primary.

Now, a day later, as final results are still being tabulated, Iowa is facing questions of trust and increased scrutiny over whether it should maintain its first-in-the-nation status. On Tuesday afternoon, Iowa Democratic Party Chair Troy Price apologized for the delay, calling the situation “unacceptable,” and promised a review to reveal what, exactly, had happened.

Reporters’ first question to Price was, “How can anyone trust you now?” Price simply responded that they had been working nonstop to make sure the results are accurate. He said the issue came down to a “coding error” in the new app being used to tally votes, but claimed that the raw data was secure.

Iowans, many of whom spent countless hours preparing for the caucuses, spent the day in anguish. “I’m embarrassed,” said one county Democratic chair last night in a tweet that has since been deleted. Raygun, a locally famous printing and clothing company, put out a shirt that stated “This Shirt Was Designed and Printed Faster Than the Caucus Results Were Released.” The beloved local political reporter David Yepsen griped to Politico that “this cooks Iowa’s goose.”

Meanwhile, former presidential candidate Julián Castro, who had called for Iowa to no longer be first on the primary calendar because it lacks diversity, took a victory lap. And Nevada, the next state to hold a caucus rather than a primary, sought to create distance from the process by “confidently” stating that what happened in Iowa would not happen there because they will not be using the same app or vendor.

“I don’t think you can test a system too much in a situation like this, with the whole world watching. And I wish that somehow, some way it could have been caught,” said Jerry Crawford, a Des Moines attorney who has chaired several presidential campaigns in Iowa. “The delay was embarrassing, but the key is to get the accurate votes, and the system did that.”

Perhaps the most frustrating aspect for many in Iowa is that the caucuses themselves had gone well. They were largely peaceful, and ran smoothly. Fred Trujillo, who caucused at the Weeks Middle School cafeteria caucus precinct location in the southside of Des Moines, said there that he felt it had been much more civil than in 2016.

The problems did not arise until it came time to report results from the precincts, something that the Iowa Democratic Party insists it will still be able to do because of a solid paper trail.

When Deepak Jonnalagedda, who ran a caucus site at Weeks Middle School, went to report the results, the app simply never worked for him. He said he had received training on running the precinct, but when it came down to using the app, he just couldn’t log in. “I was never able to play around with it. We were promised that we would be able to play around with it before we would be able to use it on the night of.”

“There’s a lot that goes into it, but yeah, I am worried that Iowa’s not going to get to go first (again), and I’m also worried that the caucus is not going to happen again,” Jonnalagedda said. “I’m not sure whether it should or not,” he added.

In Wapello County, the county Democratic chairman Zach Simonson found himself spending hours on the phone on Monday trying to call in results from the precincts in his county. “Where the issues became apparent were when I was trying to report results,” Simonson told TIME. He said it was clear that there were wires being crossed over at the Iowa Democratic Party (IDP) headquarters, and wrote an op-ed documenting his experience.

“I don’t know what the issue is with this app and who developed it and what their responsibility is, but it clearly it didn’t work very well, and it wasn’t launched very well,” he said.

The app was reportedly built by Shadow, a tech company backed by Acronym, Huffington Post reported. The outlet described Acronym as a “Democratic digital nonprofit group.”

“We sincerely regret the delay in the reporting of the results of last night’s Iowa caucuses and the uncertainty it has caused to the candidates, their campaigns, and Democratic caucus-goers,” Shadow said in a statement. The statement went on to say that the issue was with reporting results. Acronym also reportedly put out its own statement saying that they too are “eagerly awaiting” more information from IDP about what had happened, but distanced themselves from the debacle.

“It was difficult for me, and so as a 24-year-old millennial who has, like, TikTok and knows how to like — I’m not, like, technologically inept,” said Cody Hankerson, who was a caucus district chair in Sioux City and works as an organizer for the Democratic candidate in Iowa’s fourth congressional district.

In that particular caucus location, Sen. Bernie Sanders did not reach viability, and none of the people who had supported him chose to realign. Hankerson struggled with documenting that. “I was like, ‘Man, I wonder how other people are handling this on their smart phones.’ Because it was not easy to use.”

On Tuesday, the Democratic party released 62 percent of its data in the afternoon, giving a picture of what the final results could look like. With 38 percent of the data still to be reported, anything could still happen, and it’s unclear when the country will be able to move on.

Even the Democratic National Committee came down hard on the state party. “What happened last night should never happen again,” said DNC Chair Tom Perez in a statement. “We have staff working around the clock to assist the Iowa Democratic Party to ensure that all votes are counted. It is clear that the app in question did not function adequately. It will not be used in Nevada or anywhere else during the primary election process. The technology vendor must provide absolute transparent accounting of what went wrong.”

Meanwhile, several of the Democratic frontrunners have already sent out fundraising emails over the chaos. Before even the incomplete results were announced, four of the frontrunners had declared some sort of victory from the night, some more blatantly than others. Nearly all if not all of them have already moved on to New Hampshire. And Iowans will remain sorting through this mess. 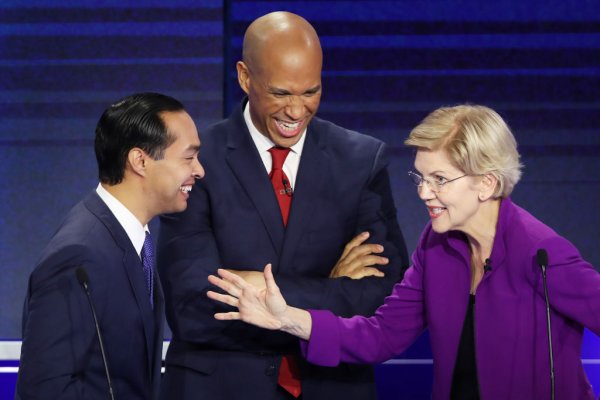