The Democratic women of Congress arrived wearing white yet again as a way to show their unity and a commitment to defending the rights of women and disenfranchised groups at the 2020 State of the Union address.

One hundred years after the ratification of the 19th amendment, which gave some women the right to vote, this year, the Democratic Women’s Caucus organized the style statement. They announced their decision to wear white as a show of solidarity in a press conference on Tuesday afternoon ahead of the State of the Union address.

The decision to wear white is an homage to the white outfits often worn by suffragists during their fight to get women’s votes recognized.

“The DWC is leading Democratic members in wearing suffragist white to send a strong, unified message of persistence in fighting for the people,” the DWC said in a statement shared with TIME.

“Proud to join my fellow @HouseDemWomen today as we #WearWhite to show support for the ongoing fight to achieve equality for women across the country.” Speaker of the House Nancy Pelosi tweeted with a group photo before the address.

Representative from Michigan Rashida Tlaib is seen before the start of the State Of The Union address by US President Donald Trump at the US Capitol in Washington, DC, on February 4, 2020.
Photo by MANDEL NGAN/AFP via Getty Images

The DWC, which is made up of the 90 Democratic women of the House, emphasized that their show of unity signified their commitment to fighting for for economic opportunity, access to health care and reproductive freedom, as well as policy change and equality for all.

The fashion statement was used to splashy effect last year during the 2019 State of the Union address, as well as in 2017 during a presidential address to Congress; both were organized by the House Democratic Women’s Working Group in service of supporting women’s issues.

Democratic members of the House of Representatives at the 2019 State of the Union address in the chamber of the U.S. House of Representatives on Feb 5, 2019 in Washington, DC.
Zach Gibson—Getty Images:
Female lawmakers dressed in suffragette white at the 2019 State of the Union Address.
Aaron P. Bernstein—Bloomberg/Getty Images:
Reps. Jan Schakowsky, D-Ill., Sylvia Garcia, D-Texas, Speaker Nancy Pelosi, D-Calif., and Alma Adams, D-N.C., wore "suffragette white" to the State of the Union address to show solidarity for women's agendas on Tuesday, Feb 5, 2019 in Washington, D.C.
Tom Williams—CQ Roll Call/Getty Images:

Notably, Hillary Clinton wore a white pantsuit to the 2016 Democratic national convention, where she became the first major party female nominee for president. 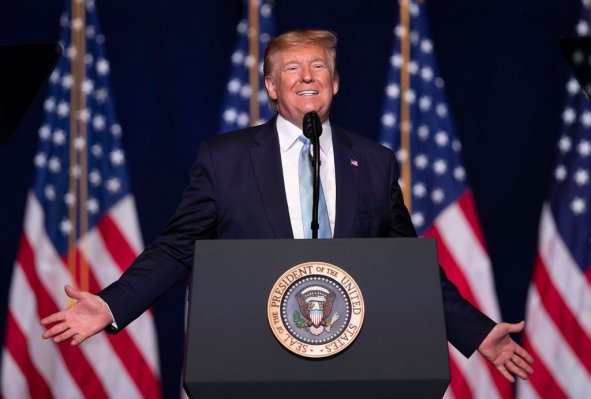 I'm a Pastor Who Ran for Congress as a Republican. Here's Why I'm Encouraging My Fellow Evangelicals Not to Vote for Donald Trump
Next Up: Editor's Pick