Alexandria Ocasio-Cortez: A 'Dangerous' Mistake for Democrats Not to Embrace the Eventual Nominee

Rep. Alexandria Ocasio-Cortez, the progressive rockstar who is currently Sen. Bernie Sanders’ most powerful surrogate, warns that Democrats will be making a “dangerous” mistake—and hurt their odds of beating Donald Trump in a general election—if they do not rally around the eventual Democratic nominee.

Her comments, made in a phone interview with TIME, come on the eve of the first-in-the-nation caucuses in Iowa, amidst reports of Democratic efforts to block Sanders. A variety of polls indicate the Vermont senator is likely to do well on Monday.

While Ocasio-Cortez said she thinks Democrats’ attempts to stop Sanders are “overblown,” she suggested she could foresee a situation in which elements within the party could try to block him. “Bernie has said this, I absolutely believe this: whoever gets the nomination, we have to rally behind them, no matter who it is,” she said. “And I would hope that everybody would do so if Bernie is the nominee as well.”

Ocasio-Cortez also discouraged Democrats from using party rules or other mechanisms to block Sanders if he advances. “I don’t think it’s a good idea for people to try to use superdelegate or other kind of subversive policies to deny anybody the nomination because it’s incredibly divisive to do so, and very demoralizing, which is a direct threat in November,” she said, adding, “The moment you start playing games trying to deny whoever is the nominee, we really start to get into dangerous territory in terms of defeating Trump.”

Sanders, who was in Iowa over the weekend, is heading back to Washington to attend the Senate impeachment trial on Monday. He plans to return Monday evening for the caucuses.

In his absence, his campaign has maintained a sweeping ground presence. In a speech Saturday night, Sanders said that his canvassers had knocked more than 500,000 doors in Iowa this year.

Sanders’ strong showing in the state triggered red flags within the Democratic party in the last few weeks. On Sunday, former Secretary of State John Kerry and a powerful surrogate for former Vice President Joe Biden was reportedly overheard complaining that Sanders is “taking down” the party. (It was also reported that Kerry was considering running for President in an attempt to stop Sanders; Kerry denies this.)

Ocasio-Cortez said that she thinks it’s important for Sanders to have a “good finish” in Iowa to maintain momentum heading toward the rest of the early states. For Sanders, one big question is whether he’ll be able to expand his base, which is deeply committed to Sanders, and turn out new voters.

After Monday night’s caucus, Ocasio-Cortez said she’ll look at figures on voter and electorate expansion, which she thinks will be bellwethers for how Democrats will do in November against Trump.

Asked how Sanders will appeal to voters who think he’s too far left, Ocasio-Cortez said that Sanders’ authenticity is how he’ll pull in voters who are more ideologically conservative.

“The way that a lot of people feel is, I may not agree with all of the Senator’s policies, but I know that he’s not bs-ing me,” she said. “And that quality is very unique in American politics, where you will have a lot of candidates who are shifting all the time what their stances are based on what they think is popular. And Bernie does not do that.”

Asked if she thought Sanders can be stopped at this point, Ocasio-Cortez harkened back to her own primary, saying that even after she’d secured the nomination against former New York Rep. Joe Crowley she still ran “as though I was five points behind.”

“No win is ever predetermined, and no win is ever a sure thing, ever,” she said. “And especially in the primaries, nothing is ever predictable. Politics is not predictable. And that’s why it’s so important that we just keep our noses down and keep organizing and keep phone banking and knocking on doors and doing what we can because this thing is not over until the nomination is secured.” 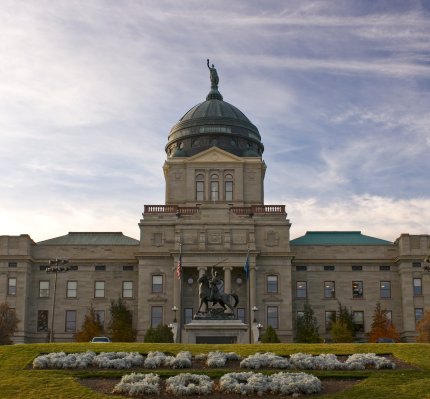 Montana Rep: Socialists Can Be Shot or Jailed
Next Up: Editor's Pick