In a 51-49 vote, Senate Republicans on Friday evening succeeded in blocking new witnesses and documents from being considered in President Donald Trump’s impeachment trial, paving the way for a likely speedy acquittal.

Throughout the Senate trial, Democrats have forcefully pushed to hear from additional witnesses and to include new internal documents and communications that they say provide more evidence of how Trump used the power of the presidency in order to secure a personal political favor from Ukraine.

Much of it — like Rudy Giuliani associate Lev Parnas’ recordings showing discussions with Trump about the Ukraine ambassador, internal emails obtained through public records requests, and John Bolton’s accounts of his conversations with the President that appear in a draft of his upcoming book — only came to light after the conclusion of the House impeachment investigation.

Now that new evidence in the trial has been blocked by the Republican majority, the president seems set for a quick acquittal.

While it seems inevitable that many witness accounts and documents will be revealed in the coming months and years, long after the conclusion of the trial, some of it may never come to light. Here are some key pieces of evidence that will not be considered as Senators decide whether the President should be removed from office.

What did Trump tell John Bolton about his Ukraine efforts? What did he witness at the White House?

Trump’s former National Security Advisor shook up the impeachment trial this week after a series of revelations from his upcoming book, The Room Where It Happened,” provided precisely the kind of firsthand account that Republicans say has been missing from Democrats’ case.

Bolton could have testified about a conversation he had with the President in which Trump openly said that he was holding up almost $400 million in military aid desperately sought by Ukraine in its war with Russia — and which had already been approved by Congress — until that country’s officials agreed to cooperate with efforts to investigate his political rivals.

He could also have recounted a meeting in May in which Trump directed him to tell the Ukrainian president to meet with Giuliani, his personal attorney, who was working on the pressure campaign for the President. Bolton could also have testified to the role played by acting White House chief of staff Mick Mulvaney and White House counsel Pat Cipollone, both of whom he alleges were present in that meeting.

While his upcoming book reportedly will contain some of these accounts, it’s unlikely to yield as much information as if he was questioned in the Senate chamber as a witness.

The three main witnesses that Senate Minority Leader Chuck Schumer advocated for heading into the trial besides Bolton were Mulvaney, Robert Blair, who serves as Mulvaney’s senior adviser as well as an assistant to Trump, and Michael Duffey, a politically appointed official at the Office of Management and Budget (OMB).

Mulvaney, who is technically still OMB’s director, ordered the hold on the military aid to Ukraine, allegedly at Trump’s direction. He did not help matters when, in a combative press conference in October, he seemed to admit, and then walk back, claims that Trump had leveraged the aid as a quid pro quo to extract investigations from Ukraine.

Testimony from former National Security Council official Fiona Hill in November drew Mulvaney closer to the center of the scandal. She told lawmakers that Gordon Sondland, the Ambassador to the European Union, “blurted out” that Mulvaney had approved a White House meeting between Zelensky and Trump if the Ukrainians announced an investigation of Burisma, a gas company that formerly employed Hunter Biden. She and other officials testified that Sondland frequently said he met with Mulvaney during the time he was handling the Ukraine negotiations.

What did Trump officials tell OMB about the holdup of the aid?

Democrats also had Duffey, the politically appointed OMB official, on their witness wish list. In July, Duffey took over control of the Ukraine aid from the career official assigned to handle it — something that TIME reported in December no one in the division remembered happening before.

Of particular interest are some 40 pages of emails between Blair and Duffey. OMB has refused to turn them over, even with redactions. “All 20 emails are being withheld,” the agency’s Freedom of Information Act officer said in a terse letter in response to a lawsuit filed by the New York Times.

What do internal communications between the White House and other agencies show?

Over the course of the impeachment inquiry process, House committees made 71 requests and issued five subpoenas for documents and communications that could show how Trump and those around him handled the Ukraine matter, from diplomacy to the military aid. They requested specific categories of documents and communications from the White House, the Office of the Vice President, OMB, the State Department, the Defense Department and the Energy Department. All of them were blocked by the White House.

How did Trump and White House officials justify the aid freeze when national security officials raised concerns about it?

In December, the Center for Public Integrity obtained heavily redacted versions of some documents related to the Ukraine military aid that they obtained via public records requests.

A few weeks later, one of the unredacted emails was published by Just Security, showing that beginning in July Pentagon officials raised concerns about the legality of the hold. Democrats have pressed to see the unredacted documents to get a full picture of how the decision was made to hold up the security assistance, ite legality, and how Trump used it to allegedly pressure Ukraine. 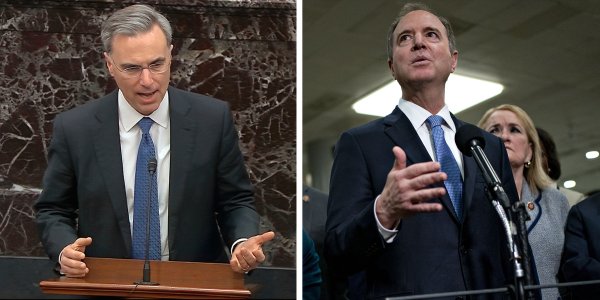 Why the Impeachment Fight Is About More Than Trump
Next Up: Editor's Pick