When the clock struck 11 p.m. local time on Jan. 31, Britain officially left the European Union, after three and a half years largely marked by arguments, negotiations and divisions.

The moment heralded the start of a new, uncertain phase in the U.K.’s national life. Britain’s lawmakers gave up their seats in the European Parliament, its trade officials became free to start negotiating with other countries, and pockets across the nation began to jangle with three million commemorative coins, minted to mark the occasion.

But as the sun rose on Feb. 1, Brits would be forgiven for not noticing much of a change. That’s because, thanks to the divorce deal agreed by Prime Minister Boris Johnson and E.U. leaders, the U.K. has now entered a “transition period” until the end of December 2020. That means most E.U. laws will continue to apply in Britain, including the rights of E.U. citizens to live and work in the country. Although new immigration rules were announced Feb. 19, they will not come into force until 2021.

So Britain will immediately recoup neither the sovereignty nor the control of its borders that voters were promised by the “Leave” side during the 2016 referendum. Officially, however, it will be one step closer to doing so. Here’s what to know about the months to come.

What will happen to travel after Jan. 31?

During the transition period, travel between the U.K. and the E.U. will continue as normal. That means travelers who are U.K. or E.U. citizens will not need visas. It also means U.K. citizens can continue to work in E.U. countries — though they have long been advised to apply for residency to make sure they can continue to do so after the transition period ends. (The same applies for E.U. citizens living in the U.K.)

The EHIC health insurance card, which ensures holders’ access to foreign medical services during time abroad, will continue to work as normal until December.

Cellphone roaming fees — nonexistent for E.U. citizens in other member states under an agreement that came into force in 2017 — will also continue to be free for Brits in the E.U. and vice versa, until December. After the transition period ends they could increase, depending on the deal the U.K. reaches with the bloc.

After the transition period ends, tourists from the U.K. will not need visas for trips of less than 90 days to the E.U., Iceland, Liechtenstein, Norway or Switzerland. But people wanting to work, study, or travel for business may need more documentation.

What will happen to immigration rules?

Ending Britain’s obligation to allow any E.U. citizen to travel, settle and work in the country was one of the driving factors behind the 2016 Brexit vote. Accordingly, setting out new, harsher immigration rules has been a priority for Johnson’s government.

On Feb. 19, the government announced a new “points-based” immigration system, which will come into force after the transition period ends.

Under the new system, foreign workers must pass an English test and hold a job offer at an “appropriate skill level” from an “approved sponsor.”

Those mandatory conditions would together award 50 “points” in the new system. To be eligible for entry to the U.K., a foreign worker must hold 70 points. More points are awarded, in bands, for higher salaries, higher educational qualifications, or if an applicant is seeking a “shortage” job, like nursing, where workers are in demand.

The Confederation of British Industry, a business lobby group, said the salary thresholds could hurt sectors of the British economy (like agriculture) that depend heavily on low-cost migrant labour.

It is unclear whether the E.U. will apply similar rules to the 1.2 million British migrants currently living and working in member states.

What will happen to the economy?

The stock markets will likely treat Feb. 1 like a normal day, given Brexit has been all but inevitable since Johnson’s victory in Britain’s Dec. 2019 general election.

But there’s still significant uncertainty on the horizon. Britain will begin trade talks with the E.U. in March, a high priority for Johnson who is keen to retain as many privileges of Britain’s membership of the E.U. as possible. But Johnson would also like to jettison some of the E.U. regulations currently complied with by the U.K. “The E.U. is making it very clear that there will inevitably be a trade off between the U.K.’s desire to deregulate and its demand for access to the E.U. market,” says Tim Bale, the deputy director of U.K. in a Changing Europe, a non-partisan academic research institute. “The U.K., as always, wants to have its cake and eat it.”

Britain will also be free to begin trade talks with the U.S., a country with which the E.U. does not have an existing free trade agreement. Trump has talked up the possibility of a “tremendous” deal with the U.K. that has the potential to be “far bigger and more lucrative” than any agreement with the E.U.

But such a deal, if agreed, will come at a price. Kim Darroch, the U.K.’s former Ambassador to the U.S., stole headlines on Friday when he said, in an interview with the Guardian, that President Trump would pressure the U.K. to accept higher prices for American pharmaceutical drugs and lower standards for agricultural goods in any trade deal. “Do they want us to pay more for their pharmaceuticals? Do the pharmaceutical companies want to use this leverage? Of course they do,” Darroch said.

Any deals agreed would not come into force until after the transition period ends in December.

Could there be another Brexit delay?

Johnson has repeatedly promised that there will be no further delay to Brexit, and that the transition period will therefore end on Dec. 31, 2020.

That leaves just 10 months for the E.U. and U.K. to strike an agreement on their future relationship, since talks are set to start on Mar. 3.

If they fail to reach an agreement, then it could put a “no deal” Brexit back on the horizon. In other words, Britain could end up abruptly leaving the E.U.’s single market and customs union with no deals to smooth its passage. That could mean lines at ports thanks to new customs checks, a sharp drop in cross-border trade as tariffs come into force, and new restrictions on U.K. businesses operating in the E.U.

With such a large majority in Parliament, Johnson could perhaps afford to renege on his pledge not to extend the transition period, especially if a deal were in sight.

“He will almost certainly have to extend. No-one in modern times, after all, has managed to do a comprehensive trade deal in only a matter of months,” Bale says. “He just won’t call it an extension. Instead, it’ll be labeled ‘Phase One’ or somesuch. And he’ll probably get away with it too.” 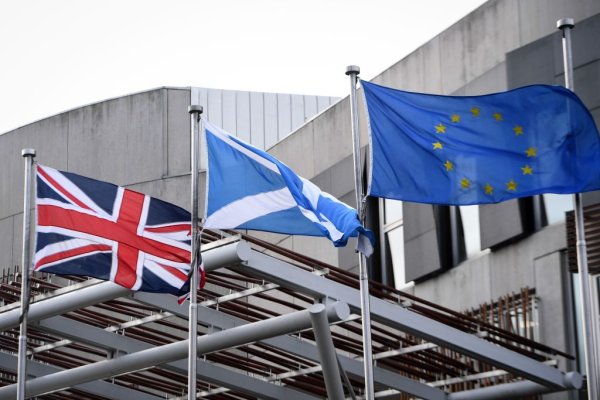