This review contains spoilers for the series finale of The Good Place.

The Good Place rebooted itself so many times over the course of four seasons that we should’ve known it was never going to settle for just one ending. Finality started setting in at least two episodes before Thursday’s extra-long finale, when the four deeply flawed human souls we’d followed for, well, more Jeremy Bearemies than I can wrap my tiny mortal brain around boarded a balloon bound for the real Good Place, with their supernatural accomplices Janet and Michael in tow.

Last week, they got their first taste of heaven—a place where even the brilliant Hypatia of Alexandria (Lisa Kudrow, in a truly divine guest appearance) was reduced to pounding endless stardust milkshakes and staring off into space, in a state of eternal ennui. Of course, Eleanor, Michael and the gang soon figured out how to build a better Good Place: just let people leave when they’ve exhausted their enthusiasm for the universe. (Kind of like, you know, when the folks who make TV shows have the good sense to cancel them once the fresh storylines run out, and before they congeal into repetitive, plotless sludge doomed to eternal life in syndication.) It would have been resolution enough to leave Chidi and Eleanor snuggling up together in the home Michael created for them, with Chidi realizing that the Good Place is “just having enough time with the people you love.”

But when the end finally came, it was more emotional than theoretical. We got to say—by which I mean, sob—good-bye to each of the characters in turn: Jason was the first to approach the door to the great unknown, but then he wandered the forest for another eon or so, waiting to give Janet back the necklace he made for her and accidentally becoming the silent monk he used to impersonate. Tahani learned a long list of life skills and waited around to spend time with her new and improved family; once a kind of useless braggart, she eventually put her afterlife to good use as the first-ever human Good Place architect.

It was tough to watch Chidi evolve past his relationship with Eleanor, but also fitting. It gave her the chance to prove she’d truly set aside the selfishness that defined her in life, and to save one last soul: Mindy St. Claire of the Medium Place, whom Eleanor realizes is “a version of me if I’d never met my friends.” On a cosmic level, the show turned toward Buddhist metaphysics once its characters’ moral journeys wrapped up—and those guys are big on the imperative to detach from one’s desires. I’m certain I had heard some version of Chidi’s analogy about the individual human soul as a wave being absorbed back into the ocean that is the universe, one that resonates more as an image to meditate on than as a theory to test out. But then, the magic of The Good Place is in its unique ability to make you feel the weight of abstract ideas in your bones.

In the end—the real end—there was only Michael, who began the series by opening one door as a fire squid in silver fox’s clothing and ended it by closing another door as a real human boy. (I can’t help but wonder who will be sitting in an office just past the Pearly Gates once he earns his way back to heaven, waiting to assure him that “everything is fine.”) It was neither an overly predictable conclusion nor a shocking one; after dreaming up so many brainteasers and thought experiments, creator Mike Schur left his characters and audience alike spiritually exhausted but at peace. Though I worried, last week, that heaven was going to be one big anticlimax—and I still have to feel a bit disappointed with the extent to which The Good Place glossed over the intersections between moral philosophy and class, race and gender throughout its run—this coda left me satisfied.

Frankly, I expected to have a lot more to say about the final episode of a show that never stopped giving its viewers new ideas to parse. As it turns out, however, further interpretation just doesn’t seem necessary. So I’ll end by paraphrasing the great 21st-century philosopher Eleanor of the Cheesecake Factory Bar, as quoted by the most advanced life form in the universe: I hated to see The Good Place walk through the final door at the edge of existence, but I loved to watch it leave. 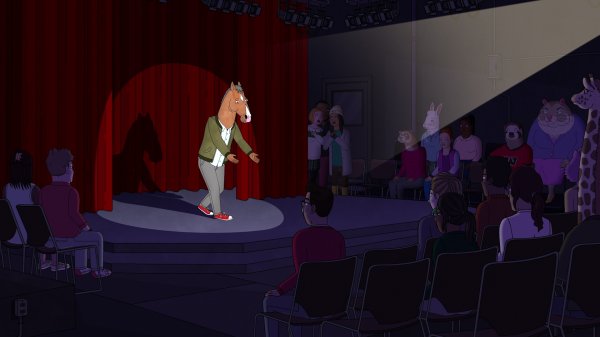