President Donald Trump could be headed for a speedy acquittal in his Senate impeachment trial after Republicans secured assurances from two key lawmakers that they would not break with the party to request additional evidence and testimony.

“There is no need for more evidence to prove something that has already been proven and that does not meet the U.S. constitution’s high bar for an impeachable offense,” Alexander said in a statement. “The constitution,” he continued, “does not give the power to remove the president from office and ban him from this year’s ballot simply for actions that are inappropriate.”

Murkowski, who said Thursday evening that she was still deliberating, said she ultimately concluded there would never be a fair trial in the Senate. “I don’t believe the continuation of this process will change anything,” she said in a statement Friday. “It is sad for me to admit that, as an institution, the Congress has failed.”

The two decisions render it all but certain that Republicans will procure the votes needed to block additional witnesses at the trial later on Friday, capping off a week of speculation on Capitol Hill. The debate over whether the Senate should hear from additional witnesses was paramount after the New York Times reported Trump’s former National Security Advisor John Bolton recounts a conversation in his upcoming book in which the President admitted to the core of the charges against him: that he had leveraged military aid to Ukraine to get the country’s government to open probes into Democratic rivals.

While McConnell has likely fended off enough defections to prevent Bolton from testifying, he was unable to keep his entire conference together. Earlier on Thursday evening, Maine Sen. Susan Collins announced that she would vote to hear from witnesses from both sides. “I believe hearing from certain witnesses would give each side the opportunity to more fully and fairly make their case, resolve any ambiguities, and provide additional clarity,” she said in a statement. A spokeswoman for Utah Sen. Mitt Romney confirmed Friday morning that he, too, would break with his party.

But while the Senate seems headed for a 51-49 vote on additional witnesses, there are still procedural uncertainties over how things will unfold on Friday.

There will be four hours of debate on the issue of witnesses—two for each side–when the trial resumes Friday afternoon as a prelude to the vote. But it is unclear what happens afterwards. Senate Minority Leader Chuck Schumer could force several procedural votes, as he did at the start of the trial. He has kept his plans close to the vest though, only telling reporters on Thursday that “the minority has rights, and we will exercise those rights.”

On Thursday night, Senators seemed in near universal agreement that the following day could stretch into the early hours of the morning. “You’re better off thinking of it as a vote-a-rama, meaning that it could go until 2, 3, 4 in the morning, as opposed to thinking of it as simply two hours on either side,” said South Carolina Sen. Tim Scott.

Overall, Republicans just seemed satisfied that the trial seemed headed for a swift ending after days of uncertainty over confernece unity. “We have a high level of interest in just getting this done,” said Senate Majority Whip John Thune.

While Murkowski joined with Collins and Romney to submit the first written question on Wednesday, Alexander provided few clues which way he was leaning until Thursday evening. At that point, he submitted his first question with his Republican colleagues, Sens. Steve Daines and Ted Cruz, asking the House managers how the partisanship in this presidential impeachment compares with that of Bill Clinton and Richard Nixon.

It was the first suggestion that Alexander, who has a history of working across the aisle, would stay firmly in his party’s line. Later that evening, he joined with one of Trump’s top allies, Sen. Lindsey Graham, along with Murkowski, Cruz, and Sens. Dan Sullivan, Rob Portman and Pat Toomey, to ask the White House team why bringing in Bolton would make a difference if they were still arguing the allegations against Trump do not warrant an impeachable offense.

As the White House answered the question, Murkowski scribbled in her notebook, while Alexander looked calmly ahead, listening intently. By the time the House managers were rebutting the response, he had moved to the back of the chamber.

Calls from House managers and Senate Democrats for Bolton’s testimony, already strong, intensified on Thursday, with the lawmakers insisting that a trial without witnesses wasn’t really a trial at all. As House managers responded to written questions from Senators, they repeatedly returned to the narrative of the urgent need to call Bolton.

“No trial, no vindication. No vindication for the President, or anyone else,” Schiff said Thursday afternoon before the start of the trial. “The Constitution requires a fair trial.”

Polls indicated the public was in their corner: a Quinnipiac poll released Jan. 28 showed that 75 percent of voters wanted to hear from witnesses in a trial. But their immediate success always hinged on persuading a small cadre of centrist lawmakers who could cross party lines. And ultimately, they weren’t able to coerce enough. 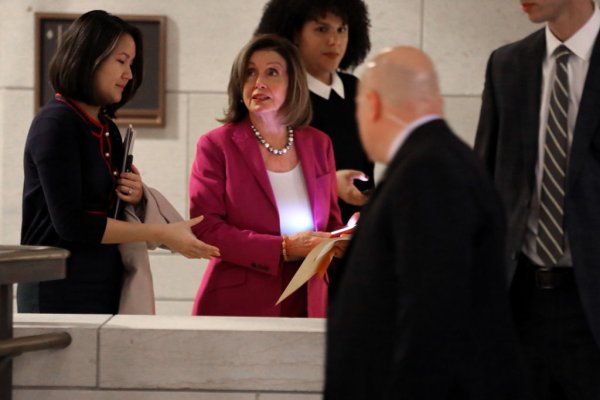 Impeachment Standoff Could Be Coming to a Close
Next Up: Editor's Pick