Senator Mitt Romney speaks to the media as he arrives during the impeachment trial of President Donald Trump on Jan. 29, 2020, in Washington, DC.
Mandel NGAN/AFP—Getty Images
By Madeleine Carlisle

The Senate impeachment trial of President Donald Trump is expected on Friday to vote on the pivotal question of whether to allow additional witnesses and documents as evidence. And with Senate Majority Leader Mitch McConnell’s recent comments to his Republican conference that he doesn’t yet have the votes to block the move and that his party members should unify in opposition to it, the decision could hang on the votes of a handful of Republican senators.

At the beginning of the trial, the Senate decided it would vote on additional evidence after lawmakers completed their 16 hours of written questions for both President Trump’s attorneys and the House managers prosecuting the case. The Democratic Caucus, assuming it remains united, needs to convince at least four Republicans to break with their party.

Their chance of success seemed to increase last Sunday, after the New York Times reported that former National Security Adviser John Bolton says in a draft of a forthcoming book that Trump told him that he wanted to withhold foreign aid to Ukraine until the country agreed to investigate his political rivals. Democrats promptly intensified their calls for Bolton to testify, which he has said he will do if subpoenaed by the Senate.

It remains an open question how senators will vote. Although McConnell has acknowledged he does not yet have the votes to block new evidence, Democrats are not sure they have the votes to allow it. “I’m by no means confident,” Connecticut Sen. Richard Blumenthal said on Wednesday when asked about the prospect of procuring four Republicans to support more evidence.

The final decision on witnesses may hinge on a few undecided Republican senators. Here’s who Washington is watching.

One of the few openly pro-choice Republicans in the Senate, Collins has a reputation for not being afraid to break with her party. She famously voted against the Republican Senate’s attempt to repeal the Affordable Care Act in 2017. However, she also cast the deciding vote in favor of Justice Brett Kavanaugh’s confirmation to the Supreme Court in 2018, after much speculation as to whether she’d step out of the party line.

Collins has said that she wants to adhere to the precedent set by the Senate impeachment trial of former President Bill Clinton as much as possible, and that trial included depositions from witnesses. (After McConnell introduced a resolution with procedures deviating from that standard she successfully pushed back, and he ultimately acceded to her.) And when the news of Bolton’s allegations in his upcoming book surfaced, Collins appeared to double down.

“I’ve said from the beginning that I felt that it was likely that we would need to call a couple of witnesses… in order to clarify some ambiguities, answer some questions. And that remains my position,” Collins said in a statement on Wednesday. “That’s the approach I took in 1999, and it’s the approach I’m taking now.”

“The reports about John Bolton’s book strengthen the case for witnesses and have prompted a number of conversations among my colleagues,” her statement concluded.

On Wednesday, Collins asked the first query in the question and answer portion of the trial, which she notably asked on behalf of herself and Sen. Mitt Romney and Sen. Lisa Murkowski, two Republicans who could also vote in favor of calling witnesses. The question read: “If President Trump had more than one motive for his alleged conduct, such as the pursuit of personal political advantage, rooting out corruption and the promotion of national interests, how should the Senate consider more than one motive in its assessment of Article One?”

The 2012 Republican presidential candidate spoke out against Trump before he entered the Senate and has periodically criticized him while in office. On Oct. 4, Romney tweeted, “By all appearances, the President’s brazen and unprecedented appeal to China and to Ukraine to investigate Joe Biden is wrong and appalling.”

Even before The Times reported Bolton’s allegations, Romney had signaled that he was open to hearing from witnesses like John Bolton. After the news broke, Romney told reporters on Monday morning that chances for a Bolton appearance increased.

The Alaskan Republican has long been seen as a key swing vote in the Senate. Like Collins, Murkowski famously voted against Republican efforts to repeal Obamacare in 2017. Unlike Collins, she did not support Justice Kavanaugh’s confirmation in 2018, making her one of the only Republicans to break from her party on the issue.

Murkowski has appeared open to the idea of witnesses. In a statement on Monday, Murkowski said: “I stated before that I was curious as to what John Bolton might have to say. From the outset, I’ve worked to ensure this trial would be fair and that members would have the opportunity to weigh in after its initial phase to determine if we need more information.”

“I’ve also said there is an appropriate time for us to evaluate whether we need additional information —that time is almost here. I look forward to the White House wrapping up presentation of its case,” she continued.

Murkowski told reporters that she met with McConnell on Wednesday morning.

The longtime Senator from Tennessee is retiring this year with a bipartisan track record. Alexander has repeatedly said that he wants to hear from both sides before he decides whether or not more evidence is needed.

He has emphasized that he has not reached a decision this week, and told reporters Monday that he plans to “make sure we have a chance after we’ve heard the arguments, as we’ve asked our questions, to decide if we need additional evidence and I’ll decide at that time.”

Alexander was one of a handful of Senators who did not ask questions on Wednesday – and the only one among the Republicans considered wildcards on witness votes.

The Ohio Senator has a lower profile than Alexander, but he is one of the few Republican lawmakers who spoke out against Trump’s July call with Ukrainian President Volodymyr Zelensky, which is at the center of the impeachment proceedings.

“The president should not have raised the Biden issue on that call, period. It’s not appropriate for a president to engage a foreign government in an investigation of a political opponent,” The Columbus Dispatch reported Portman said in October. However, the paper said Portman did not think it was an impeachable offense.

The Columbus Dispatch also reported on Jan. 7 that Portman said he was open to calling witnesses in the trial, but wanted to wait to decide until opening statements were finished.

During questions in the trial on Wednesday, Portman submitted the following: “Given that impeachment proceedings are privileged in the Senate and largely prevent other work from taking place while they are ongoing, please address the implications of allowing the House to present an incomplete case to the Senate and request the Senate to seek testimony from additional witnesses.”

– With reporting by Alana Abramson/Washington 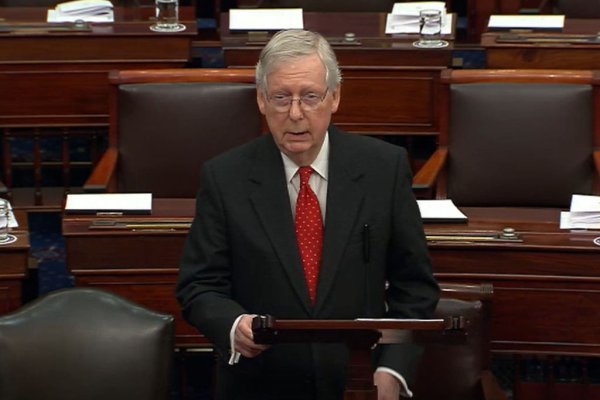 GOP Divisions Up Stakes for Dems
Next Up: Editor's Pick