Why Coronavirus Seems to Be Striking More Adults Than Kids

More than 8,000 people worldwide have been infected, and 171 have been killed, by a novel coronavirus that originated in Wuhan, China last month. But early research out of Wuhan suggests one group has been largely spared by the contagious disease: young children.

A paper published in the New England Journal of Medicine on Thursday analyzed characteristics of 425 of the first people in Wuhan infected by the virus known as 2019-nCoV and found that none were younger than 15. The median age of patients was 59, and, at least as of mid-January, the youngest person to die from the disease was 36.

Though there are not good data to show how many children have been infected as the virus spread beyond those first 425 patients, it’s certain that that number is no longer zero: a nine-month-old baby in Beijing is the youngest known patient, according to city health authorities. Even still, the early patient characteristics reported in NEJM provides clues about who the virus is, or is not, infecting.

It also provides another point of comparison to fellow coronavirus severe acute respiratory syndrome, or SARS, says Dr. Mark Denison, a pediatric infectious disease specialist at Vanderbilt University School of Medicine. SARS was “dramatically less common” among children than adults during the outbreak that began in China around 2003, and Denison says kids younger than 13 reported much less severe symptoms than older patients.

It’s possible that, due to some quirk of biology, children are simply less susceptible than adults to 2019-nCoV infection; their cells may be less hospitable to the virus, making it more difficult for 2019-nCoV to replicate and jump to other people, Denison says. The NEJM authors write that kids may be getting the virus but showing milder symptoms than adults, making them less likely to seek medical care and thus excluding them from research and case counts.

Denison says that tracks with the behavior of many other viral illnesses. “Evolutionarily, we’re designed to be exposed to these things as kids, and then we have broad-based immunity,” he says. “Get it now while you’re more likely to survive, and then you won’t get it later.”

Dr. Sharon Nachman, a pediatric infectious disease specialist at Stony Brook Children’s Hospital, in Stony Brook, N.Y., adds that children’s environments may help them. Kids may see more common coronaviruses—a class of viruses that includes some that can cause the common cold—than adults do, potentially giving them a certain amount of umbrella immunity. “They’re in school and daycare; they’re in a milieu of infectious diseases,” Nachman says. “Maybe there’s some immunity from coronaviruses that [they develop, but] doesn’t last lifelong.”

Kids are also often plain healthier than adults, Nachman says. “If you’re well and you get an illness, you often do better than if you have” other underlying conditions, she says. Children may also be more up-to-date on their vaccinations, sparing them secondary infections that can often come along with an illness and bring about complications.

Still, Denison cautions that these are just theories at this point, and “do not mean that children can’t get infected and they can’t transmit infection.”

Nachman adds that routine behaviors can help keep populations healthy, regardless of the disease in question. “Good hand-washing helps. Staying healthy and eating healthy will also help,” she says. “The things we take for granted actually do work. It doesn’t matter what the virus is. The routine things work.” 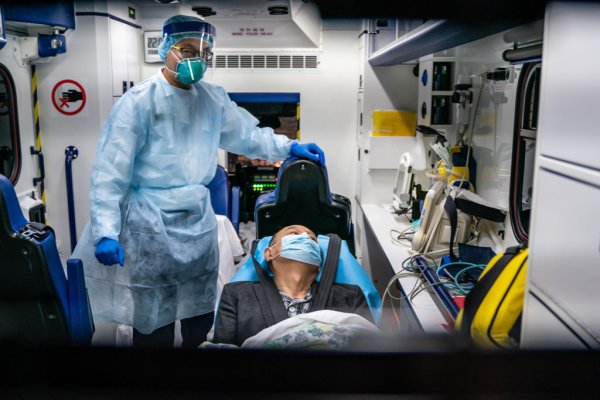 Hong Kong's Medical Workers Under Pressure From Coronavirus
Next Up: Editor's Pick