'We Can Do Better.' Mississippi Governor Orders Closure of State Prison's Ward After String of Deaths

Rallygoers at the Mississippi Capitol in Jackson, Miss. carry signs protesting conditions in prisons where inmates have been killed in violent clashes in recent weeks.
Rogelio V. Solis — AP
By Josiah Bates

Mississippi Governor Tate Reeves has announced he will close a unit within a troubled state prison that has dealt with a series of violent and deadly incidents in the past month.

In his first “State of the State” address Monday, Reeves called for the closure of Unit 29 at the Mississippi State Penitentiary at Parchman where multiple inmates have died, many of them reportedly due to violent fights. He also cited concerns about the prison’s infrastructure and the staffing demands placed upon corrections officers.

The latest death in Unit 29 occurred Sunday morning, when 26-year-old Joshua Norman was found hanging in his cell, according to the Mississippi Department of Corrections (MDOC). The official cause, and manner, of his death are being investigated.

Reeves, who was inaugurated on Jan. 14, said he wants the unit to be closed as soon as possible. “I’ve seen enough,” he said. “We have to turn the page. This is the first step, and I have asked the department to begin the preparations to make it happen safely, justly and quickly,” he said.

The MDOC did not respond to TIME’s request for comment regarding its next steps working toward Ward 29’s closure.

At least 10 inmates have died in Mississippi prisons since late December, and a majority of the deaths have occurred at Parchman. Two prisoners were killed last week after an altercation; on Jan. 3rd, an inmate at Parchman was stabbed to death.

On Jan. 14, the same day Reeves was inaugurated, dozens of inmates filed a lawsuit against the MDOC. They argued that prisons are understaffed and that they’re being forced to live in cruel conditions, including issues with food, water leaks, mold and rats. Rapper Yo Gotti and Team Roc, the philanthropic arm of Jay Z’s Roc Nation company, have provided the inmates with legal representation.

In a statement sent to TIME from Team Roc, Yo Gotti said that the Governor’s decision to close the section of the prison is a good first step, but that more work needs to be done.

“[Reeves] must implement broader safety measures to address similar issues in other units and urgently provide inmates with medical attention,” Yo Gotti said in the statement. “In the interim, we’re calling for the Department of Justice to step in, move the Parchman inmates to federal prisons and ensure their immediate well-being.”

In recent weeks, the MDOC has moved some Parchman inmates to a private prison in the state.

A video posted on Team Roc’s Twitter page shows some of the conditions inmates are subjected to. The footage — which is at times graphic — includes fights, wounded inmates, overcrowding and defective toilets and sinks.

Multiple nonprofit organizations, including the Mississippi ACLU and the Southern Poverty Law Center (SPLC), have voiced criticism of the Mississippi prison system. On Jan. 7, the SPLC sent a letter to the Department of Justice calling for an investigation into the prisons.

In a 2019 statement, the former Interim Director of the ACLU of Mississippi said that prisons and jails across the state are at a “breaking point.”

“Mississippi turned to imprisonment as the cure-all not only for crime and public safety but also for mental illness, addiction, and poverty,” Joshua Tom said in the statement. “The criminal justice system and prisons cannot deal with all of these issues.”

Reeves previously announced that he was forming a group of “diverse, experienced Mississippians” to conduct a nationwide search for a commissioner to lead the MDOC; former commissioner Pelicia Hall stepped down earlier this month, announcing that she would be moving to work in the private sector and to advocate for criminal justice reform.

During his address Monday, Reeves said he recently visited Parchman and was angry over what he saw.

“The problems were infuriating. There is no excuse,” Reeves said. “We can do better.” 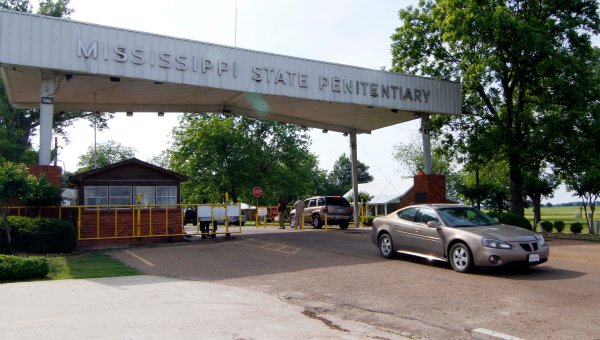 After 5 Deaths in State Prisons In Recent Weeks, Mississippi Moving Inmates to Private Facilities. Here's What to Know
Next Up: Editor's Pick