Trump's Impeachment Defense Takes Its Cue From the President

When Donald Trump’s lawyers began their opening arguments in the Senate impeachment trial on Jan. 25, much of their argument boiled down to a phrase the President himself has been repeating for months: read the transcript.

And so Trump’s lawyers placed the government’s summary of the phone call—which the President has long maintained was “perfect”—at the heart of the two-hour presentation that kicked off their client’s defense. “If that were the only piece of evidence we had, it would be enough to show the Democrats’ entire theory is unfounded,” Purpura said.

Purpura outlined what the defense considers the six key facts supporting their case: the call summary does not explicitly show Trump conditioning security assistance on anything; Zelensky has said he did not feel Trump was pressuring him; Ukrainian officials did not appear to know the aid had been held up until after the call; no witnesses testified that Trump had said there was a quid pro quo; the assistance flowed in September without any public action on investigations; and, in their view, Trump’s policy toward Ukraine has been generous.

“What more do you need to know?” Purpura asked, referencing the fact that Zelensky and some of his advisors have said they didn’t feel Trump was pushing them into a quid pro quo, and that Trump does not mention the delayed aid on the call. “There can’t be a threat without the person knowing he’s being threatened.”

House Democrats, who impeached Trump in December for abuse of power and obstructing Congress’s investigation, allege that Trump put his own political interests ahead of American national security by withholding aid to Ukraine to pressure the country to announce an investigation into his political rival Joe Biden. The defense lawyers sought to establish other motivations for Trump’s actions, claiming that the President wanted allies to share the burden of providing for Ukraine and sought to root out corruption in the country.

But the other side doesn’t buy that argument, and took issue with many of the assertions the defense made. “They argue that the July 25 transcript doesn’t show the two leaders making an explicit reference to a corrupt ‘this for that,’ quid pro quo, or bribery scheme,” House Intelligence Chairman Adam Schiff, the Democrats’ lead impeachment manager, said after the defense’s arguments on Saturday. “As if you would expect the two leaders on the phone to say, ‘OK, this is how the bribery is going to work. This is how the shakedown is going to work.'”

While Trump’s lawyers’ borrowed the President’s argument that the call summary exonerates him, their delivery contrasted sharply with Trump’s own style and the White House’s messaging strategy to date, which has focused more on objections to the impeachment process than on the substance of the case. Trump had praised Cipollone’s “emotion” after his fiery first appearance early in the week prompted a reprimand from Chief Justice John Roberts, and Sekulow signaled on Jan. 24 that the team would go after Joe Biden and his son Hunter in their remarks. “Believe me, you’ll hear about that issue,” Sekulow said the night before opening arguments began.

But during their first hours of arguments, Trump’s attorneys mounted a sober defense that tried to poke holes in the case mounted by the House impeachment managers. “We can talk about the process, we will talk about the law,” Cipollone said. “But today, we are going to confront them on the merits.”

Nevertheless, Trump’s lawyers echoed their boss in arguing that the Democrats were seeking not only to nullify the results of the 2016 election but also to upend the coming contest.

“They’re asking you to remove President Trump from the ballot in an election that’s occurring in approximately nine months,” Cipollone said, reminding the senators acting as jurors that the Senate has never convicted and removed a President from office. “They’re asking you to tear up all of the ballots across the country on your own initiative.” It was an attempt to turn Democrats’ claim that Trump was attempting to interfere in the 2020 election against them, claiming that Democrats are essentially asking the Senate to “interfere” in the election instead. “Let the people decide for themselves,” Cipollone said.

The President’s lawyers channeled Trump in other ways, too. Sekulow highlighted both former special counsel Robert Mueller’s investigation— which did not establish coordination between the Trump campaign and Russia—as well as Inspector General Michael Horowitz’s findings on FISA court abuses in the FBI investigation into Trump’s campaign. Sekulow also raised the debunked idea that Ukraine meddled in the 2016 election. He said these episodes helped explain why Trump did not “blindly trust” his own intelligence officials.

Trump seemed pleased by the presentation. “Any fair minded person watching the Senate trial today would be able to see how unfairly I have been treated and that this is indeed the totally partisan Impeachment Hoax that EVERYBODY, including the Democrats, truly knows it is. This should never be allowed to happen again!” he tweeted.

While the senators appeared to be fending off boredom and fatigue at times during the nearly 24 hours House managers used to present their case, they seemed to be attentive during Saturday’s short session, with most taking copious notes. They’ll return to watch the defense team continue their arguments on Monday. 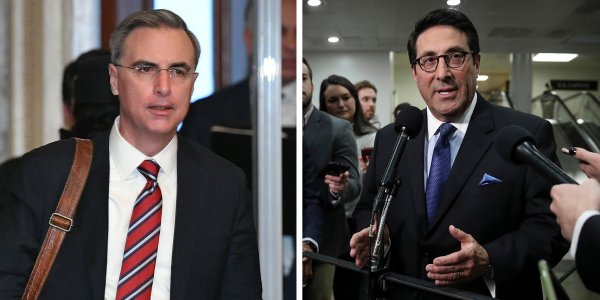