“I have news for everybody,” Mick Mulvaney told the world on Oct. 17, weeks after House Democrats launched a formal impeachment inquiry into President Donald Trump. “Get over it. There is going to be political influence in foreign policy.” In pressuring Ukraine to investigate his political rival last July, Mulvaney argued, Trump was doing nothing his predecessors hadn’t.

Democrats strongly disagree, and have based their impeachment case on the idea that Trump’s Ukraine gambit was an offense grave enough to warrant impeachment. Exactly when a foreign policy “quid pro quo” is politics as usual and when it warrants removal from office was the question at the heart of Democrats’ arguments on Thursday as Trump’s Senate trial continued.

Democrats have never claimed that Trump is the only President to use the power of his office for reelection. The taxpayer-funded Air Force One has been used for political purposes by both his Republican and Democratic predecessors — and not without controversy. But the Democratic impeachment managers hammered home on Thursday the argument that Trump’s conduct with Ukraine was different because he put his own political interests ahead of national security, compromising the latter for the former.

Thursday’s marathon of arguments from the Democratic impeachment managers focused on why Trump should be removed for abusing the power of his office, the first article with which they charged him last December. (They are expected to address the second, obstruction of Congress, on Friday, according to a Democratic official.) At the heart of the hours of recollections of witness testimonies from the House inquiry last year, as well and the role of Trump’s personal attorney Rudy Giuliani, was their concern that Trump had abused his office and comprised national security by withholding aid to Ukraine and requesting an investigation into a top political rival on a July 25th phone call with the country’s President Volodymyr Zelensky.

“It was not just that President Trump ignored official U.S. policy and the talking points he was given [on the July 25th call]. It was that what he was doing — withholding support from Ukraine — was actually contrary to and harmful to U.S. policy,” Rep. Adam Schiff, the lead impeachment manager, said on the Senate floor Thursday afternoon. “There is clear and bipartisan support for Ukraine. Ukraine is our ally. What’s more, they’re at war with our adversary. So our goal should be helping President Zelensky’s anti-corruption reforms and helping Ukraine fight its adversary, Russia, in any way that we can.”

Democrats have long been framing Trump’s actions as a national security conundrum, arguing that withholding military aid to Ukraine, which has been fighting Russian aggression for years, ultimately strengthened Russian President Vladimir Putin’s hand. Apolitical bureaucrats, like National Security Staffer Lt. Col. Alexander Vindman and former Charge d’Affaires in Ukraine Bill Taylor said as much under oath before the House committees during the inquiry, as did some political appointees like Tim Morrison, the former top Russia expert at the National Security Council.

“…When President Zelensky raised the issue of U.S. military aid needed to confront Russian aggression, President Trump did nothing to reassure the Ukrainian leader of steadfast support for Ukraine’s sovereignty,” Schiff continued. “Instead, he made personal demands. It is for these reasons that President Trump’s investigations went against official U.S. policy. Witnesses confirm that President Trump’s request actually diverged not just from our policy but from our own national security.”

Though Schiff’s argument wasn’t new, his audience was: the Republican-led Senate, who had unified just five years earlier to push former President Barack Obama to provide lethal aid to Ukraine. The argument seemed squarely aimed at convincing Republican Senators with strong national security backgrounds, such as Iowa Sen. Joni Ernst, who is up for reelection, to break with their party. Just one day earlier, impeachment manager Rep. Jason Crow had invoked his military experience to explain why holding the aid was so devastating for Ukrainian forces, even if it was ultimately released. “I remember what it feels like to not have the equipment you need it when you need it,” said Crow, who served three tours of duty in Iraq and Afghanistan. “Real people’s lives are at stake. Thats why this matters.”

This line of argument, however, is unlikely to make a dent in the deep support for the President among Senate Republicans.

When the issue has been raised with Republicans in the past, they have frequently responded by noting that Trump, not Obama, ultimately provided lethal aid to Ukraine, and have staunchly asserted last summer’s aid hold-up did not bolster Russia.

“We’ve taken enormous steps forward vis-a-vis the previous administration. True? Very clearly, that’s true.,” Rep. Chris Stewart, a Republican member of the House Intelligence Committee, which led the public testimony from witnesses, told TIME last month. “And I think most of those people expected the aid would be withheld… It happens frequently. I don’t think [the Ukrainians] or the Russians ever viewed it as a meaningful policy that was going to impact that actual balance.”

Senate Republicans seemed similarly unmoved on Thursday. “We know personally, the people there and their faces and how important it is to them… the aid the United States, that President Trump has brought forward, that continued to be blocked by President Obama,” Sen. John Barasso, a member of the Senate Republican leadership team, told reporters after Schiff’s argument Wednesday evening. 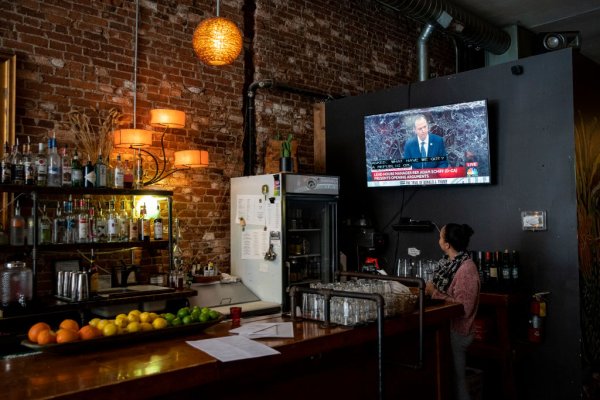