How BTS Made Sure Their First Grammys Were Unforgettable

At last, K-pop supergroup BTS made it to music’s biggest night. The seven members of the squad — Jimin, Jin, Suga, J-Hope, RM, V and Jung Kook — were nominated for one award at the 2019 Grammys and presented Best R&B Album at the ceremony, where they handed over the prize to new Grammy winner H.E.R. (They also made history by becoming the first K-pop act to present at the Grammys.)

It doesn’t take much to set the “BTS Army,” as the group’s fanbase is known, into motion. First, the group caused mayhem when they showed up on the red carpet to pose for photos and participate in pre-show interviews.

They were seated for the night’s show next to Camila Cabello, Miley Cyrus and Dolly Parton; not bad for their first appearance there. Fans spotted the seven guys grooving in their seats during the evening’s tribute to Parton (including the performance of her song “9 to 5”) and loved their enthusiasm for the iconic country star.

And when BTS finally did take the Grammys stage — to present the Best R&B Album prize — viewers were especially chuffed by a small exchange between winner H.E.R. and V: H.E.R. bowed as she walked up the steps, with V returning the gesture as he handed over the trophy.

They were also spotted enjoying H.E.R.’s stage performance, too.

BTS released their blockbuster album Love Yourself: Answer in fall 2018, breaking records as the first K-pop group to top the Billboard album charts for that release and their preceding project, Love Yourself: Tear, released earlier in 2018. They made waves in their first U.S. awards show appearance at the American Music Awards in 2017, which they followed up with a U.S. stadium tour, series of talk show appearances, a speech at the U.N. General Assembly and, at last, the Grammys themselves this year. 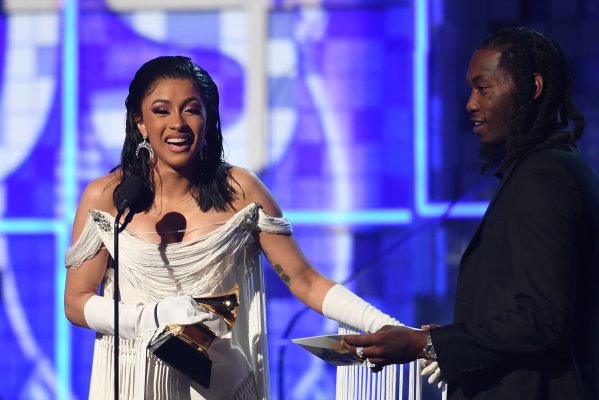 Cardi B Just Became the First Solo Female Artist to Win a Grammy for Best Rap Album
Next Up: Editor's Pick