Donald Trump is already worried about the television ratings for the first day of his defense team’s opening arguments in his historic impeachment trial in the U.S. Senate. “Looks like my lawyers will be forced to start on Saturday, which is called Death Valley in T.V.,” he complained on Twitter Friday morning.

Trump has good reason to want people to tune in. January 25 marks the first time his lawyers will formally lay out their defense outside of Trump’s own tweets and surrogates’ appearances on cable news. It will be a crucial moment for the President’s team to speak not just to the Senators who are acting as jurors in this trial, but also to voters, who will head to the ballot box in less than a year to decide whether Trump deserves a second term.

“There’s two parts of what we’re going to do,” Trump’s attorney Jay Sekulow told reporters in the Capitol on Jan. 22. “We’re going to respond of course to what the House managers have put forward, and we are going to make an affirmative case defending the President.”

For three days this week, House impeachment managers methodically laid out their case that Trump leveraged the power of the presidency to help himself win reelection and then obstructed Congress’s efforts to investigate his conduct. It’s a case the House had been building for months through their own impeachment inquiry, and while they presented it as one, coherent narrative for the first time in the Senate, they had to battle fatigue among senators and a seemingly ambivalent public who had heard much of it before.

Throughout the managers’ arguments, Trump’s legal team has been watching and preparing for their own moment in the spotlight. Each day, they typically convene at the White House in the morning before the start of the trial, according to a source with knowledge of the situation. The meetings are led by White House counsel Pat Cipollone, who has a second floor office in the West Wing and is taking point on the impeachment defense. The lawyers then head to the Hill shortly before the 1 p.m. start time for the trial. When they are in the Capitol, they have been working out of the Vice President’s ceremonial office next door the Senate chamber.

Trump has been eagerly monitoring his team’s progress since the trial got underway in earnest on Jan. 21. After watching the first day of formal proceedings from Davos, Switzerland, Trump said he was “very proud” of Cipollone and pleased by the “emotion” he displayed in his initial remarks. Cipollone was fiery in his first appearance, saying Trump has done “absolutely nothing wrong” and accusing the Democrats of pushing through a “partisan impeachment” which he likened to “stealing an election.” Around midnight on the first day, Cipollone tangled so aggressively with House Judiciary Chairman Jerrold Nadler, an impeachment manager, that Chief Justice John Roberts made his first major interjection in the trial to reprimand them and call them to be more civil during the proceedings.

Now that he’s back in the United States, Trump will be able to meet with his lawyers as needed at the White House before the trial begins each afternoon, according to the source. “He’s been very involved, as he should be,” White House press secretary Stephanie Grisham says of the role Trump is playing in crafting his defense. “He has every right to be part of the defense strategy and demand the due process that the [Democrats] have denied him.”

Still, even members of his defense team say there is a limit to just how hands-on Trump should get in his own trial. Trump said on Jan. 22 that he’d like to appear in person at the Capitol to “sit right in the front row and stare at their corrupt faces,” but that he thinks his lawyers would advise against it. “His counsel might recommend against that,” Sekulow said that same evening when asked about it, laughing. “That’s not the way it works. Presidents don’t do that.”

According to a brief filed Jan. 20, a key overarching strategy for the defense will be to argue that for something to be an impeachable offense, it needs to be a crime. There is a robust debate about this constitutional question, and the other side flatly rejects that argument. But constitutional law expert Alan Dershowitz and other lawyers on Trump’s team will claim that “House Democrats’ newly invented ‘abuse of power’ theory collapses at the threshold because it fails to allege any violation of law whatsoever,” according to the document.

Similarly, on the obstruction of Congress charge, the defense plans to show that Trump’s actions in refusing to comply with subpoenas were legal. “The Framers restricted impeachment to reach only egregious conduct that endangers the Constitution,” the defense lawyers wrote in their brief. “A difference of legal opinion over whether subpoenas are enforceable cannot be dressed up to approach that level.”

Sekulow was asked on Jan. 23 about Trump allies, including Dershowitz, who have previously taken the position that an impeachable offense does not need to be a technical crime. (Dershowitz has since tweeted that he wants to “retract” his old statements to that effect.) “We’ve got lawyers that are going to be put forward when our side of the case goes that represent multiple schools of thought on what is and is not an impeachable offense,” Sekulow said. “But they have one thing in common: that the actions alleged and the actions of the President do not reach that level, no matter which school of thought you’re on.”

Along with broad arguments about what constitutes an impeachable offense, the defense team will dispute Democrats’ analysis of the facts, arguing that Trump did not leverage security assistance in exchange for Ukraine publicly announcing an investigation into his political rival Joe Biden, as the House managers allege. “The evidence squarely refutes” this “made-up claim,” the lawyers wrote in their brief. They plan to prove this by highlighting the summary of the July 2018 phone call between Trump and Ukrainian President Volodomyr Zelensky and the fact that the aid to Ukraine was released in September 2018 without the country taking any public actions on investigations, among other points of evidence.

Trump’s lawyers have even been speaking with some of the Republican senators for advice, according to Republican Senator Roy Blunt of Missouri, who emphasized to reporters that he was not among them. Speaking to conservative radio host Hugh Hewitt on Jan. 24, Republican Senator Ted Cruz of Texas said, “I actually spent a fair amount of time last night after the trial talking with the President’s lawyers and urging them, number one, focus on substance more and process less.”

Trump’s team has also signaled that they don’t want the Senate to call new witnesses, a vote the upper chamber is set to take after the end of opening arguments and questions, but that they are preparing for that possibility just in case.

In the end, regardless of what Trump’s lawyers put forward, it is very likely that they will win, given the partisan math of the Senate. A two-thirds majority vote is required to remove Trump from office, which would mean 20 Republican Senators would need to vote with all of the Democrats to convict President Trump. A senior administration official explains the calculus for Trump’s team this way: “Any day that’s not a win for Democrats is a win for the President.” 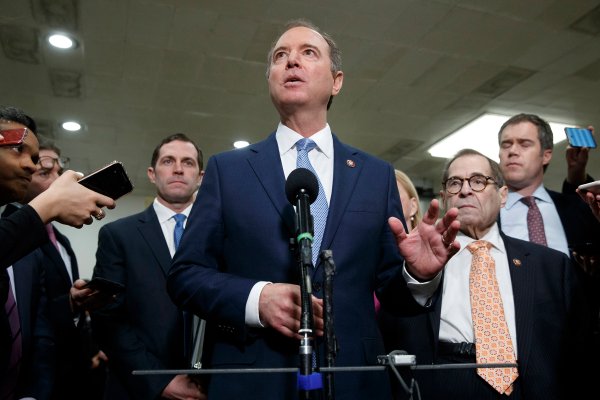